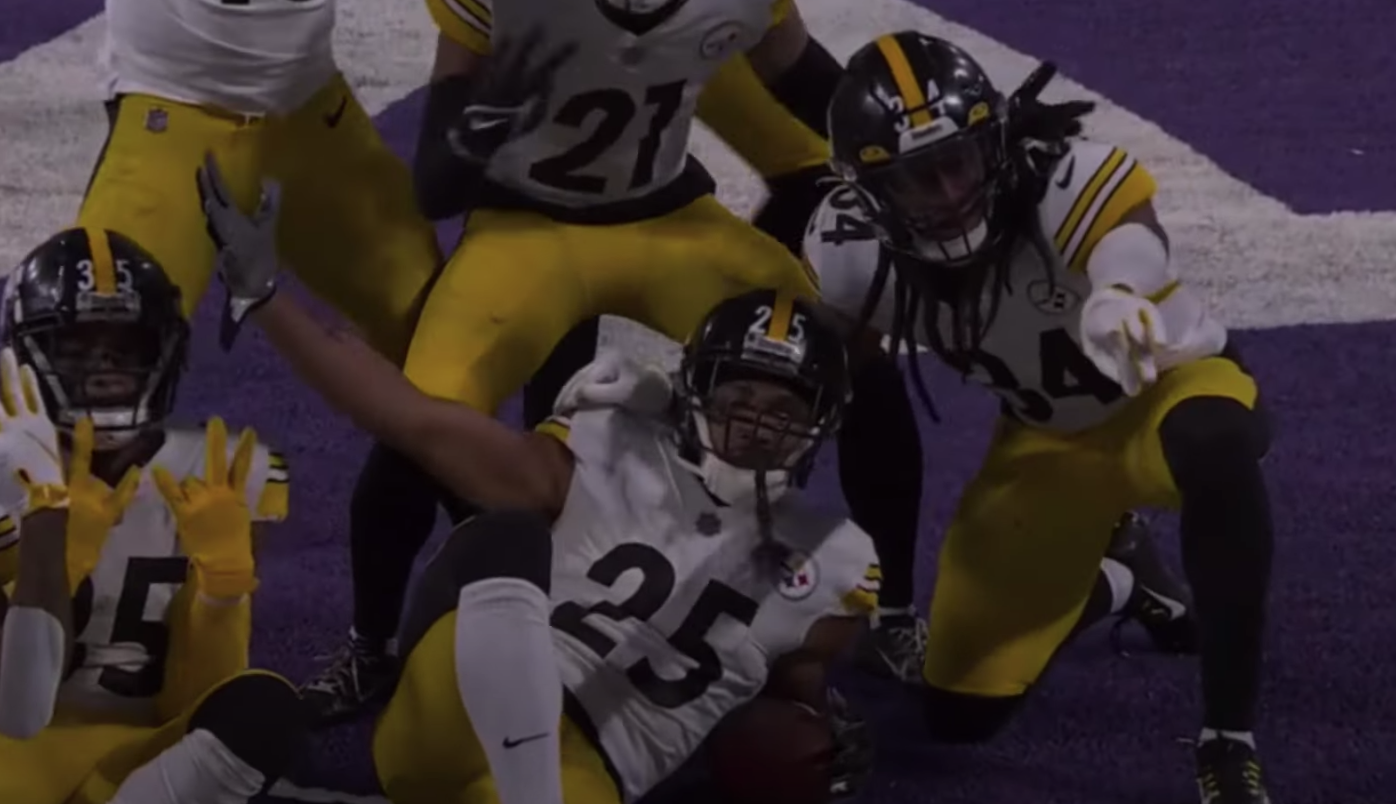 As we transition to the offseason with only OTAs and mandatory minicamp in the way of effectively a dead period with little happening in the NFL, I have taken some film room request on certain players and aspects yinz wanted highlighted about their play from last season. For this film room breakdown, I will hold CB Ahkello Witherspoon under the microscope and put forward an argument that he can effectively take over the role Joe Haden once had as CB1 in Pittsburgh, commending the decision to re-sign him during this offseason and for the price that they got him for.

Ahkello Witherspoon’s 2021 season was one of highs and lows, effectively jumping on the moving train when Pittsburgh traded a 5th round pick to the Seattle Seahawks to acquire him shortly before the regular season got underway. After playing only four snaps in his debut against the Raiders where he got benched, Witherspoon returned to the field in Week 10, playing in every game thereafter, allowing 14 receptions on 37 targets (37.8 completion %) for 233 yards and one TD. Witherspoon had nine PBUs and three INTs which comes out to a 35.1 passer rating when targeted according to Pro Football Reference.

When you watch Witherspoon on tape, you see a CB that passes the eye test as far as what prototypical outside corners should look like. He is a long 6’2, 195lb with 33” arms, allowing him to effectively combat passes to bigger receivers and tight ends on possession downs and in the red zone. While this play didn’t count due to an offsides penalty, watch Witherspoon blanket #31 Darrel Williams in the red zone, keeping him on his back as he plays the ball in the air like the receiver intended for the pass and brings it down for the INT.

According to the geniuses running the Steelers Depot’s analytics department and thanks to the data provided by Pro Football Focus, we know for a fact that Witherspoon had a career year in Pittsburgh while still adjusting to their system on the fly. According to their findings, Witherspoon had a forced incompletion percentage rate of 15.2% in 2021, the highest on his five-year NFL career. We see an example of this on this pass breakup against the Browns as Witherspoon plays on off-man coverage and breaks on the ball once thrown, driving on the receivers inside shoulder and sticks his hand in-between the receiver’s hands to knock out the ball and deflect the pass.

Witherspoon came into his own under the lights in primetime against the Minnesota Vikings on Thursday Night Football in Week 14. Here in this game, we saw Witherspoon be used in a variety of different coverage schemes and have success against a deadly passing game. Take, for example, this play where he is in off man coverage against #17 K.J. Osborn and stays patient in his shuffle on the snap, weaving to match the receivers break before breaking on the ball once thrown to close toward the receiver’s shoulder and force the incomplete pass.

Here is another example of Witherspoon against Osborn where he shows his ability to click-and-close on the underneath pass while in off-man coverage. He quickly reads the pass from Cousins on the slant route and breaks on the ball as the receiver breaks inside, arriving just as the receiver catches the football to tackle him just short of the sticks to force fourth down.

Here we see Witherspoon’s first of two INTs on the night while operating out of a deep zone in Cover 3. Witherspoon opens in a side shuffle and gains depth to keep a lid overtop before following Kirk Cousins’ eyes toward a dig route. Witherspoon capitalizes on the tipped pass by Devin Bush and comes up with the INT. According to data provided by Pro Football Focus, Witherspoon allowed a passer rating of 60.6 when in zone coverage and 45. 8 when in man in 2021, both the lowest marks of his career.

Here on Witherspoon’s second INT of the night, we see the CB matched up with Osborn in press man coverage in Cover 1. Witherspoon gets two hands on the receiver to jam him as he attempts to break inside, disrupting Osborn just enough to undercut the route and pick off the pass, returning it nearly 45 yards the other way. Witherspoon has the size (6’2, 195lb) and length (33” arms) to be a physical press man corner at the LOS, compiling a coverage grade of 79.7 by PFF.

Witherspoon finished the Thursday Night matchup against Minnesota with two interceptions and three pass breakups, holding Kirk Cousins to a rating of just 2.3 on targets heading in his direction as detailed in a post by Steelers Depot’s resident CB expert Owen Straley.

Witherspoon consistently played 70% or more of the teams’ defensive snaps after Week 11 (outside of Week 15 vs Kansas City where he got dinged up) becoming Pittsburgh’s #1 cover corner due to Joe Haden missing four games during that stretch. While not the quickest defender, Witherspoon uses his length and recovery speed to make up for it to make plays on the football. Here’s a good example against Cleveland in Week 17 where he picks up #11 Donovan Peoples-Jones who aligns tight on the left side. Witherspoon stays square as DPJ approaches at the top of his route, getting hands on as he breaks out toward the sideline, playing a tad high for my taste, but recovers and undercuts the route for the INT.

Now, while Witherspoon has great size, length, and testing speed (4.45 40), his long lanky frame and lack of twitch make it difficult to run with elite deep speed down the field. We saw this last season in his low moment where #11 Henry Ruggs got on top of him for a 62-yard TD, running away from him as he stemmed his route inside down the middle of the field. Witherspoon recently said in an interview that S Minkah Fitzpatrick “iced him out in his first game” which he has an argument for based on the tape here. Still, relying on Witherspoon to run stride-for-stride with the likes of Tyreek Hill and Ja’Marr Chase could end badly without help overtop.

While not being the twitchiest CB when it comes to quick changes of direction and dealing with deep speed, Witherspoon also tends to struggle with consistency as a tackler. According to Pro Football Focus, Witherspoon missed ten tackle attempts last season, leading to a porous missed tackle percentage of 38.5%. Watch this clip where Witherspoon flies int to try and take down Ravens TE/FB #42 Patrick Ricard in the flat. While displaying willingness as a tackler to come downhill, Witherspoon fails to wrap up and drive his feet on contact, bouncing off the receiver who outweighs him by over 100 pounds.

Here is another example in the same game against the Ravens where Witherspoon is in position to take down RB #33 Devonta Freeman in the second level, but he cheats too far inside, getting out of position and slips when Freeman cuts back to his right, ending up on the ground as Freeman picks up nearly ten more yards as the missed tackle attempt.

Still, you do see examples where Witherspoon shows he can be a capable tackler when needed like on this scramble by #8 Lamar Jackson. Witherspoon drops into his zone near the boundary, sitting on any pass that may come to the running back out of the backfield. When he sees Jackson take off, Witherspoon closes ground and forces Jackson inside, going low to put him down right at the first down marker.

Overall, Witherspoon turned into a pleasant surprise for Pittsburgh after initially thinking that they may have blown another Day Three pick on a player that wouldn’t contribute. The trade not only paid dividends in 2021, but also for the next two season as Witherspoon re-signed with the Steelers on a two-year deal worth $8 million. Given the fact that Witherspoon appeared in only ten games in 2021, the deal seems fair given his performance. However, when comparing his contract to other CBs like Charvarius Ward, Rasul Douglas, and Donte Jackson who are comparable players that cashed in for $9+ million annually, $4 million per for Douglas looks like a bargain.

Witherspoon isn’t without his warts as we seen in this deep dive. He lacks elite long speed and quickness and can be inconsistent as a tackler. Still, he managed to provide Pittsburgh with a spark in the secondary, just like Straley concluded in his film room breakdown on Witherspoon shared above:

“Entering the offseason, while far from a flashy option, retaining Witherspoon could allow the team to move on from long standing veteran Joe Haden, who will turn 33 this offseason and has dealt with injuries throughout his productive career in Pittsburgh. Regardless, it is encouraging that the Steelers are finally getting production out of a player they traded a 2023 fifth round pick for, and one can only imagine where this defense would be right now if not for the recent play of Ahkello Witherspoon.”

Witherspoon enters the 2022 offseason atop the depth chart with Levi Wallace and Cam Sutton as the other notable names in the CB room. While Sutton is the longest-tenured Steeler and Wallace comes from Buffalo with his own achievements, neither possess the combination of length, athleticism, and ball skills that Witherspoon possesses. He held his own in matchups against Justin Jefferson and A.J. Brown, two of the top WRs in the NFL. He now has a full season to adjust to life in Pittsburgh and learn the defensive system.

He also has developed a trust and confidence in his teammates in the locker room as well as his head coach Mike Tomlin who he praised in an interview with Terrell Owens and Matthew Hatchette, likely leading him to return to Pittsburgh this offseason thanks to environment and team camaraderie developed in just his short time here. Expectations will be high on Witherspoon heading into 2022, having to cover the likes of Ja’Marr Chase, Tee Higgins, and Amari Cooper in just the AFC North alone. Still, he showed in a limited sample size last season that he is up for the challenge, and I look forward to seeing him operate as the likely CB1 for Pittsburgh this fall.

What are your thoughts on Ahkello Witherspoon and his 2021 season? Do you think that he can be an effective CB1 in Pittsburgh in 2022? Did Pittsburgh get Witherspoon on a great value deal, or was it on-par for his value? Can Witherspoon build off his 2021 campaign this season? Please leave your thoughts in the comments section below and thanks again for reading!