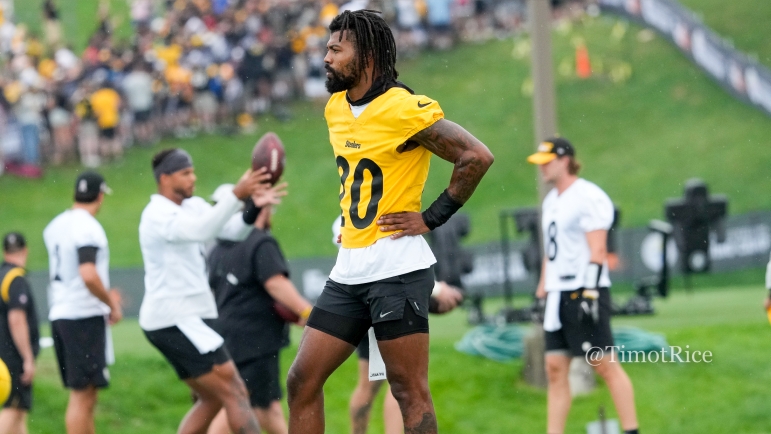 “I think back to the night I met Cam Sutton the day before his pro day, when he was coming outta Tennessee, we met with him as we do. We talked schematics, he got on the board, he drew up all-22. He talked in a real global sense and Kevin Cobert and I just looked at each other. His global football knowledge and awareness and his ability to articulate it is unique. It’s been unique and it shows up often in his play, not only in his play, but his communication helps others,” Tomlin said.

Sutton took over a bigger role in the Steelers’ defense last year with Mike Hilton and Steven Nelson departing, and with Joe Haden likely not returning to the team, Sutton will be as important as ever. His year-to-year development has been impressive, and as he enters a contract season, expect Sutton to have another impressive season.

As Tomlin said, his communication can help everyone defensively. He’s going to be a leader in a cornerback room that also features Ahkello Witherspoon entering his second year with the team and Levi Wallace coming in for his first season in Pittsburgh. Witherspoon got a lot better as the season went on last year, and those three could form the basis of what could end up being an underrated cornerback group. Wallace was a really nice addition, and Sutton has generally always been solid. I would expect that to continue this year.

While the Steelers might lack a true No. 1 “shutdown” corner, what they do have is a bunch of guys with unique skillsets and a history of being reliable cornerbacks in the league. Sutton and Wallace are both tough, physical corners, while Sutton’s route recognition is impressive, which speaks to his football knowledge that Tomlin spoke about. Witherspoon is speedy and looked really impressive in man coverage last season. Add Arthur Maulet to that group as a nickel corner, and I think the Steelers’ corners can have a pretty solid year.

Sutton is a guy who I’m sure Tomlin would like to keep in Pittsburgh long-term. If he gets an extension after this year, it would be his third contract with the team after he signed a two-year extension prior to the 2021 season.

If he plays well this year, his next contract would likely exceed that, but Pittsburgh has had such a hard time finding reliable cornerback play through the draft that they might be willing to pay a little more than they usually would for Sutton. He clearly has the respect of his teammates and coaches, and I like what he’s been able to do on the field. Let’s hope he impresses even more in 2022 and finds his way back to Pittsburgh on an extension.