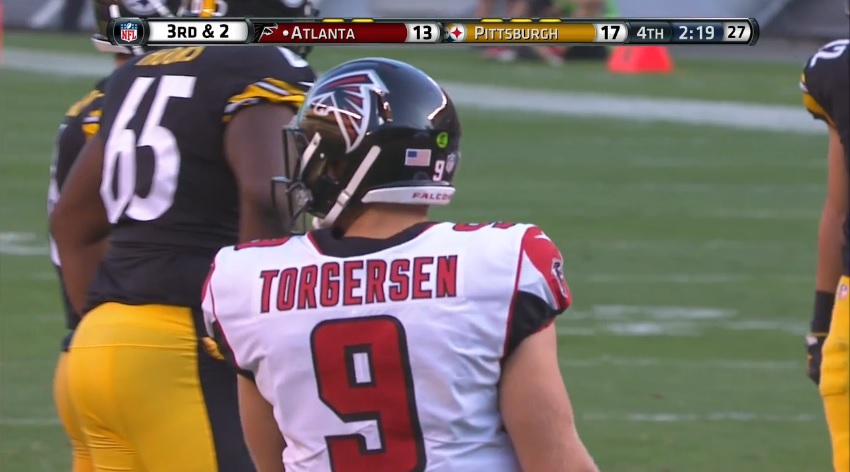 Rookie minicamp begins this afternoon for the Pittsburgh Steelers. There’s around 50 players in attendance. You know a chunk of the names already. All seven draft picks, all 13 UDFAs, and select players on futures deals are in attendance. But there are also 20 tryout players vying to nab a roster spot and make their way into training camp.

As we’ve pointed out before, the team signing tryout players is nothing new. Last year, they picked up two. In 2016, they added a whopping four of them. So because it’s important to know these names and the fact we are nothing if not thorough around here, here’s the skinny of the 20 tryout players starting their NFL career today.

We profiled Boynton a couple weeks ago and it seemed to get a great response from you guys. Named team captain in 2018 and helped turn around a program that won one game his first three years, going 8-4 in 2017. Most interesting thing of note on the roster is the fact they list him as a cornerback. He played nickel and safety throughout college but told me he felt like he was a natural corner. The biggest concern, on paper, is the 4.58 Pro Day speed, and if he has enough juice to stay step-for-step with speedy receivers.

A name that was really off the radar, not even included anywhere in NFL Draft Scout’s system, which had bios on 261 draft-eligible safeties. Two-year starter with 55 tackles and a pick for the Big Green. Played WR in high school and according to his bio, a Junior Olympic skier. 106 career tackles. Has a job offer to work at Microsoft as a programming manager so don’t feel too bad if he isn’t signed.

Two-year starter who worked on special teams his freshmen and sophomore seasons. 69 tackles, no interceptions or forced fumbles as a senior. Five pass breakups. Had four pick six’s as a junior in high school, 18 touchdowns receiving, which led the all of South Carolina. One career interception, which came in 2016. Ran a 4.6 at his UL’s Pro Day. First named pronounced: Zye-key-is. Nickname is “Zach.”

This is a name to watch. Great speed (4.46 Pro Day), high effort player who was part of Green Bay’s minicamp last weekend. Maybe that gives him some sort of leg-up, not as wide-eyed through this weekend as other first-timers. Three-year starter who made 47 tackles (he also wore #47) and picked off a pass in 2017. Invited to this year’s Tropical Bowl. Four career INTs. Watch this hustle play from 2015.

Knew this name sounded familiar.. Had this play saved from 2015 and made a note.. Speed and hustle will get you noticed!! @MikeMinterJr6 pic.twitter.com/VIlKzaQ3Ue

Important to note he’s being listed as a safety despite – somehow – playing linebacker at college, all 190 pounds of him. Moving to safety was sorta obvious. Had a strong career despite his lack of size. 65 tackles, 5 INTs, 3 FFs last season. First team All-MEAC in 2016, adding 10 TFL and four interceptions. Excellent production at a small school level. If he can show some baseline traits at a new position, he might have a shot. Good story, preferred walk-on and finally earned a scholarship before the start of his senior year. Here’s an article about it. Apparently runs a 4.52 40. Computer programmer, backup plan is to become a software developer for John Deere.

Arguably the biggest “name” of the tryouts. UDFA in 2017 who has spent time with Atlanta, Washington, and most recently, on Detroit’s practice squad. Also spent literally two days with Arizona in early April. Put up nice numbers for the Quakers in college, throwing 52 career TDs to only 18 INTs – and only seven picks his final two years combined. Too bad there’s really no room for him. Steelers aren’t taking 5 QBs to Latrobe.

Wrote about him when we found out he was invited. You can read about him here. Ballhawking corner who picked off 9 passes in 2015 – that led the FBS – and then teams stopped throwing his way from there. Just a lone INT as a senior. 14 career interceptions.

Yes, his lack of size is the most striking thing about him. But doesn’t make it impossible to play in the NFL, much less get on a 90 man roster. Lot of similarities between him and Donte Deayon, a 158 pound corner who picked off 17 passes at Boise State and has played in a few games with the New York Giants.

Below average athlete (4.6, 9’9″ broad, 7.00 three cone) but has some size. As is the case with so many WVU kids, JUCO transfer and a one-year starter who racked up 41 tackles and an interception in 2017. Miami born and WVU schooled – we know the Steelers have an affinity for both. Played WR his first year at his JUCO. Here’s a feature video on him.

Had a great interview with Dunn featured on the site the other day. Don’t have a whole lot to add beyond that. DE who dropped his weight to play on the edge. Dined with Mike Tomlin at Wake’s Pro Day. Only 7 career sacks with some ugly measurables (5.09 40, 26 inch vert, 8’9″ broad, 7.15 three cone). Has to play better than he times.

There’s a name for ya. Below average workout (4.81 40, 34 inch vert, 9’4″ broad). Two-year starter who transferred from Nebraska, sitting out all of 2015. 92 tackles (3.5 for loss) and a sack. Big presence in his community. Youngstown native. Got a shoutout from the other Courtney Love on Late Night With Seth Myers. Also from her on Twitter.

The football player’s name comes from the family. Grandfather was named “Courtland.”

We wrote about Niswander here and there isn’t much more I can add. Ranked the 27th best punter by NFL Draft Scout. Three-year starter who averaged a career best 43 yards per punt as a senior. Odds are going to be really tough for a specialist to make it although, he is the only listed one of all the tryouts. So Danny Smith can get a long look at him, for better or worse.

Local product from Baldwin High School, just outside of Pittsburgh. Ran 4.58 at his Pro Day. Impressive stats, averaging 6.8 yards per carry on 111 totes in 2017. 17 career touchdowns and got some light kick return work throughout his career. Stellar high school career with plenty of accolades, including the PPG’s Fabulous 22. Other names on that list that year? Montae Nicholson (24 tackles with Washington last year), Lenny Williams (you know him if you follow the PSAC), Robert Foster (signed as a high-priority UDFA with Buffalo), Dorian Johnson (went to Pitt, 4th rounder in 2017), Tyler Boyd (Bengals WR). Good company.

Rotated throughout La Tech’s offense, recording 111 carries and three touchdowns in 2017. Best season came as a junior, rushing for over 1000 yards and nine touchdowns. Big back at 224 pounds…ran like one too (4.71 40). He was reported to be a UDFA under contract but appears to be a tryout.

According to Draft Analyst, Craft “displays burst through the hole,” but is a “one-speed ball carrier.”

Ran a respectable 4.79 40, 32 inch vert, and 9’6″ broad at his Pro Day workout. Caught 15 passes for one touchdown as a senior. JUCO kid who spent one year at Northeast Mississippi CC. Played QB there, throwing for over 1000 yards in 2014. Granted medical redshirt for unknown injury in 2016.

Bounced around plenty in his career. Two years at a community college, two years at Texas (9 starts at RT in 2016), before starting three games at RG this past year for the Panthers. Came over as a grad transfer so he didn’t have to sit out. Played football and basketball in high school. Played in the NFLPA game. Apparently had a deal in place with Oakland after the draft but that appears to have fallen through. Here’s a feature piece on him.

Pretty light at 212 pounds. Ran 4.7 flat at his Pro Day with a 32 inch vert 9’10” broad and 22 reps on the bar. Three year starter who played safety in college. Maybe a hybrid player in camp? Named conference co-defensive PlayerOof The Year in 2015. 82 tackles, 11.5 TFL, 5.5 sacks, 1 INT. Previously committed to Southern Illinois, redshirted, and then transferred. QB in high school. Steelers were at his Pro Day, one of 20 teams to attend.

Obviously looks the part. Limited athlete (25.5 vert, 8’7″ broad). Played guard the last two years for the Tar Heels. Not sure why he is now listed as a tackle. Nickname is “D.D. Blaze.” Wants to play in the NFL or become a professional wrestler. Steelers met with him prior to the draft.

Spent three seasons at Saginaw Valley State before coming to Gannon, a D2 school located near Erie, PA. Did it all in college – quarterback, running back, wide receiver. Played some QB in 2016, his first year at Gannon, but it didn’t go well (6 INTs on 51 attempts). Last year, caught 50 balls and carried it another 68 times with 11 total touchdowns.

Steelers got a good look at him. Invited to attend Cal U’s Pro Day, set up by the Steelers, and then went to Eastern Michigan’s Pro Day. Dan Colbert attended and he was the one to call him to invite him to camp. You can hear that phone call here, a cool look behind the veil. Courtesy of the Saline Post.

Great moment for SHS grad and @salinefootball alumni Tyler Palka as he was invited to the Pittsburgh Steelers minicamp today. Palka was invited while watching the draft at the home of agent Dr. Ping, also of Saline. Video by Jessica Ping pic.twitter.com/pqLx9U2o57

Originally had a contract with the Falcons but that fell through. We did an interview with him recently – you can check that out here. Tested pretty well in his workout, running a 4.5 40, 32.5 vert, and 10’5″ broad. Originally played at Utah State, starting three games in 2014 where he caught two passes and made six tackles on special teams. Spent a year at Highland CC before coming to YSU. Started 2016 and 2017 for the Penguins, catching 32 passes and four touchdowns as a senior, averaging over 17 yards per grab.

46 tackles and an incredible 16.5 of them for a loss as a senior. 7.5 sacks added on for good measure. Three year starter who bounced between LB and DL.

His past is…interesting. A disorderly house ordinance in 2014 which honestly, isn’t that bad. What’s weird is that he apparently played for Concord University in 2009…nine years ago. If he was even just 18 years old then, that would make him 27 now, I think the oldest player in the entire minicamp (even older than Lavon Hooks, who has been in the NFL for going on four years). At the time, Concord listed him as a 6’3, 200 pound safety. He played for them too, recording 51 tackles his freshman season. Tarver apparently played multiple positions in high school, from running back to safety.

This 2010 article indicated Tarver was being moved from safety to linebacker, which means they expected him to see action that year – he didn’t drop out shortly after the season ended. I don’t know what happened to create such a gap but 2009 is the only year he recorded any stats, according to the NCAA.