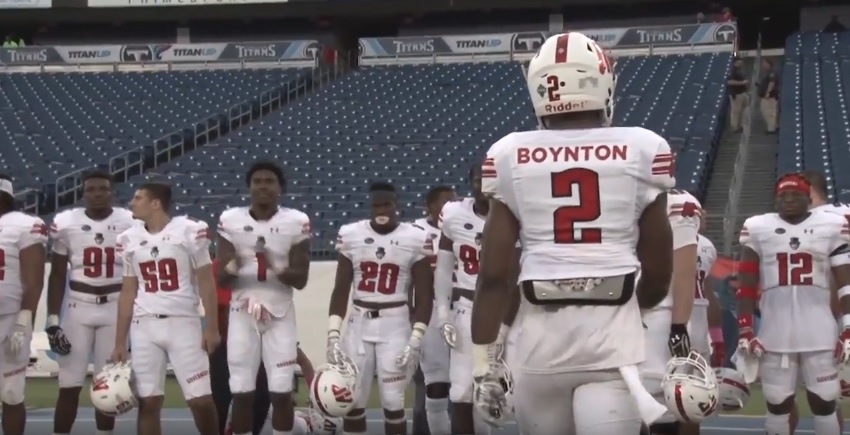 “Once you get through the bottom, the sky is the limit.”

For Malik Boynton, it’s a philosophy he’s unfortunately had to endure enough for any person’s lifetime. From losing his mom to breast cancer, homeless and living out of a van, and a spinal injury that left him paralyzed. Somehow, through it all, he’s been able to stay positive, and remain focused on his NFL dream.

Next weekend, he’ll get that chance.

Boynton, a defensive back from Austin Peay, is one of several names to earn a tryout for the Pittsburgh Steelers in their rookie minicamp, set to take place May 11th through the 13th. The odds, as we’ve talked about before, are difficult – though not impossible – to overcome. It is, literally, the bottom of the roster.

It wouldn’t be the first time Boynton has beaten those odds.

Born and raised in Detroit, Boynton was there as the city fell on its own hard times after the auto industry collapsed. His mom worked for Chrysler, his dad for the city, and for awhile, life was stable for Boynton and his three siblings, two brothers and a sister.

But his mom – heart and soul of the household – passed away from breast cancer in 2010. Even without her presence, Boynton carries values instilled by her today.

“Oh man, you know my mom was the rock of the family,” he tells me in an interview earlier this week. “She was a ball of energy. She didn’t change for anybody. She told me to always be myself. When the crowd is going one way, you make the decision based off what you think is the right decision. Don’t ever fall to peer pressure. Don’t ever worry about what other people around me are saying or doing.”

A few years later, with the city still struggling to recover, his dad lost his job. Money ran out and the family, for two weeks, were forced to live out of a van.

“Then my dad moved in with a lady he met and all of us, me and me my three siblings, my two brothers and my sister, moved in with my auntie. But she had cancer too. She got sick, the time came where she was in Stage 4, it was just too much of a burden to stay there. We broke up. I ended up bouncing from house to house.”

Boynton was on his own to find a roof over his head. It meant stays with his high school middle linebacker, a girl from his high school, and Mac Horvath, his high school basketball coach. As difficult as those times were, Boynton is thankful the right people were in his life when he needed them most.

Through all of it, enough adversity to weigh anyone down, there was football. There’s always been football. It’s been a dream, a passion, a goal since Day One.

But the dream wasn’t just for himself. It was for those close to him and those watching from afar.

“I was determined to get to the NFL so I could impact the lives around me and be influential to the people back home. Because it’s not common for a kid out of Detroit, Michigan to just make it.”

There wasn’t any money to attend camp after camp like so many other recruits, where specialists, events with expensive sign-ups, and off-field trainers dominate the landscape. Instead, Boynton relied on his tape and versatility to garner attention. There was plenty of it. In high school, he did it all: receiver, cornerback, quarterback, even dabbling at defensive end.

He had a couple of D2 offers and another from Florida Atlantic but it’s fair to say he was lightly recruited. Kirby Cannon, initially the DB coach at Central Michigan, recruited him the hardest, and when Cannon got offered the head gig at Austin Peay, Boynton followed him to Tennessee. Success, unfortunately didn’t, and the team won just one game his first three seasons. A coaching change thankfully altered the team’s record too, putting together an impressive 8-4 campaign in 2017.

Signing on as a cornerback in 2014, the coaching staff almost immediately switched him to receiver, where he found success his freshman season. He finished it second on the team with 25 receptions and one trip to the end zone. A move back to the secondary came in 2015, and the rest of his career, though his high school experience made it about as seamless of a transition as possible. Playing a safety/nickel role, Boynton describes himself as a “natural corner,” he enjoyed a solid career and nabbed his first career interception as a senior. I was able to find the clip on a highlight reel on Austin Peay’s Youtube channel, a victory over Morehead State that broke a 29 game losing streak.

That career, however, could’ve easily ended in 2016. There’s a certain destiny for Boynton to come to Pittsburgh. In 2016 against Mercer, a hit on a running back left him partially paralyzed. Similar to what happened to Ryan Shazier, blame it on a bad form tackle. For a moment, Boynton thought he was ok, getting up and beginning to walk off the field. That’s when it hit him.

“I got up after the hit, limb by limb I went numb. I moved my left arm, it went numb. I couldn’t move it no more. I tried to tap my helmet with my right arm and it went numb. And then the pain, it didn’t hurt as much as my body was in shock. It just shot to my legs and it dropped.”

He cried as they stretchered him off the field, having no idea if his football career just ended and if his life would change forever.

Diagnosed with a spinal concussion, like the injury Tommy Maddox suffered, Boynton was ruled out for the rest of the year. He recovered and doctors cleared him medically in January but left with a clear warning – football shouldn’t be on his mind.

“[The doctor] told me it wouldn’t be smart to play again. He said, ‘if you weigh your options, is it that serious?’ I guess he didn’t know who he was talking to. Because it was that serious for me.”

Antonio Brown was the first player to pop into Boynton’s head when he knew he was coming to Steelers’ camp, easy to understand given their Michigan connection. But Boynton knows Shazier’s story too, even if his injury was ultimately far less severe.

Fully healthy, he returned for his senior season. A success on and off the field, he was named team captain before the year began. An honor that meant more than any personal goal or statistic.

“That was everything. It’s one thing to be a good athlete, a great asset to the team. But to be the captain, it was just like, I felt like I was doing things the right way on and off the field. And I was inspiring other people to look towards me when adversity hit. And that’s what I live for. I love to fuel other people to be better. Not just look out for myself and make sure I’m doing the right thing. Look back and make sure my teammates are ok. That they’re going through things and growing through the pain. There’s always adversity. It’s never just easy. That was real humbling for me.”

A solid Pro Day workout at Vanderbilt, running in the 4.5’s with a 33.5 inch vert generated interest from Steelers’ scouts, who talked to him when the day was done. Day Three of the draft came and went and doubt crept in, but his agent, Cedric Saunders, was confident a call, a chance, would come.

It did. From Pittsburgh, the only organization to offer a tryout.

“[My agent] was telling me to be patient, don’t lose faith. We got off the phone and it was like back-to-back calls. That call ended and he called me back within a minute. He called me and talked to me and the Steelers were going to invite me to camp. It felt unreal. I was just ecstatic just to get the opportunity. That’s all I really wanted, was a chance to show why I should really be there.”

Steelers scout Dave Petett called him later that night to make the invite official and get him ready to make his trip to Pittsburgh. The Steelers have given tryout players a fair shake in the past. Last year, they signed two of them, Matt Galambos and Phazahn Odom, and in 2016, they brought in Marcus Tucker, who remains with the team and has a puncher’s chance at making the 53 man roster.

For Boynton, that’s all he needs. A fair shake, an opportunity, one he believes he’ll make the most of. The odds of a tryout player making it are slim. But so is someone in Boynton’s position, able to overcome so much in his life, and never losing sight of his dream.

“You never know when it’s your last down in this life. Me being homeless, me losing my mom, all it did was teach me how to treat other people. You never know what the next person is going through. The materialistic things become so much smaller when you don’t have anything. I’m used to being less fortunate than most other people in this world…I’m more excited by seeing the people around me happy, influencing other people, knowing I inspired somebody who was struggling to find a purpose in their life.

“While I was chasing my dream, I just forgot for a second that NFL players get paid. I didn’t even think about that. All I could think about was the chance to put another helmet on. I get the chance to show the people back home no matter how low you feel at a point, you can always climb out of the hole.”