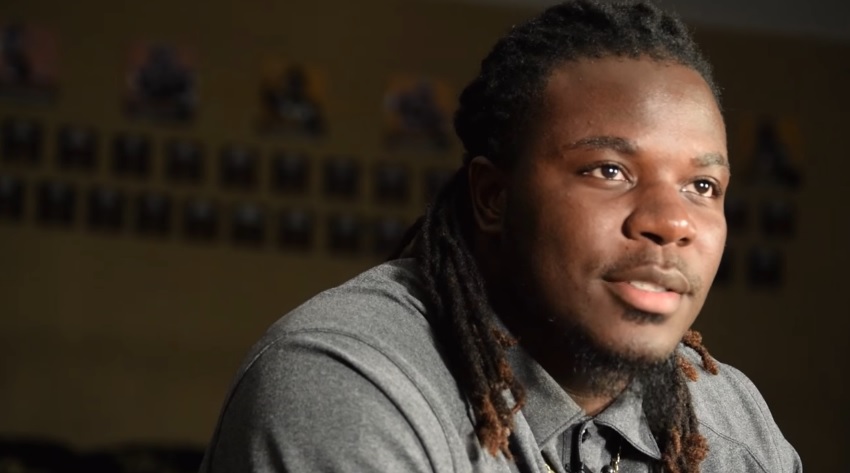 First, can you let us know what the next steps are for you – how are you handling the pre-camp craziness?

Yeah – first of all, I was a defensive lineman at Wake the last four years. I came in as a linebacker and wanted to play there but they needed me at defensive end. Now, I’m trying to transition back to linebacker and get the outside linebacker skills.

I dropped twenty pounds since my pro day. I dropped that weight. I’m transforming my body to start looking like a linebacker again. I’m giving it my best effort and taking advantage of the opportunity to show I can move like a linebacker.

How do you make this roster, from your perspective?

I can do that through special teams. When I touch down in Pittsburgh and play I want the special teams coach to say that we can’t let Wendell Dunn go. Once I make it on special teams, I can use that step to show my skills as a linebacker. That’s the way I see it working out for me there.

Tell me why you chose the Steelers as your free agent destination?

I had dinner with Mike Tomlin and the GM at my pro day and loved his attitude. It gave me a good feeling about him. On TV he looks really intimidating – really serious. I was worried it was going to be a real intense dinner. But it wasn’t – he was really funny. He came in and said “What’s up! A Florida guy!” I was thinking, man, I can do this!

After that I felt I needed to play for him. I loved his vibe. He wants you to work hard and told me I needed to know what to do and to be better than anyone else to do it. I loved that.

What are you most excited about?

I can’t wait to get there and get that NFL vibe. Everybody has something to day about how the NFL is -whether they’ve played or not. The NFL is this or that. This is my dream, since I was a young kid.

To touch that dream…even a little bit. I’m really looking forward to it. And to playing linebacker again!

What do you think you do well – what gives you an edge?

I’m really smart. I think that gives me an upper hand. I can pick up an offense when I watch film. I don’t just watch the ball. I watch players and tendencies. And I’m really physical. I have always been the smaller guy – in high school as a linebacker and in college as a defensive end. But I was always the captain. I have a grit and attitude about myself.

I bring energy and pick teammates up. I think all of these things combined help me stay ahead.

Tell me more about your ability to contribute on special teams. That’ll be key…

At Wake, my defensive line coach wouldn’t let me play on special teams. He didn’t want to risk me getting injured. But in the beginning of camp I’d joke around with the special teams coach and he’d put me out there for a bit.

I know I can cause a ruckus on special teams. I want to be the first guy there and disrupt something. I want to cause something. I’m good with my hands too. I worked on the punt teams some last season and can hold a guy up for three seconds and then get downfield.

So, what are the things you need to work on most, do you think?

I need to work on my speed and hips. I’m working on that most right now. I’ve been working on that for months and have gotten better and faster. I dropped twenty pounds. I can’t wait to hear what the coaches tell me about my work and if I’ve improved.

I’ve been boxing every day. The female Winston-Salem boxing champ has a son who played football with me. I work with her every morning and she’s been grinding me. And I’ve been getting my football work in with the coaches and working with the strength and conditioning coach at Wake to change my eating habits.. I’m changing my whole lifestyle to get to the proper weight. It was very hard. I’m staying focused and listening to my coaches, and doing non-stop training.

Tell us about you the person. Not the player. What inspires Wendell Dunn and why is football so important to you?

I came from a tough neighborhood in Miami called Homestead. I was taken away from my mom when she had problems with the police. I was sent to stay with my aunt. We had twelve people living there and five bedrooms. But I kept a positive attitude. I always wanted more. Football was my get away from everything,

I was the class clown. I still am – you’ll see that. Not in a disrespectful way. Just with that energy. I was that way in school up through eighth grade, when my science teacher saw that and understood who I was and took me under her wing. She stuck with me – went to my parent-teacher conferences and went to all of my games with her husband.

In 11th grade, when I turned eighteen and was officially an adult, my aunt kicked me out of the house, I had nowhere to go but my science teacher and her husband took me in and I lived with them. They got me college ready.

Did that help inspire your work with kids as well?

I fell in love with working with kids – I helped do so in the community then. When I got to Wake it was killing me that I wasn’t working with the community there. That’s when Dr. Brown brought me in to help work in their sports literacy program. Every Thursday I work with eighth graders to help them. I see myself in those kids.

That’s where I am now. I like helping those boys. No matter where I end up – football or something else – I want to help in the community.

I’ll always be a clown. I want everyone to have that positive energy. I want to lift people up not break them down. But I’m a leader too. As a captain on the team, the coach showed me how to talk to players that weren’t working hard as they should. I didn’t like that conflict. But he showed me how to do it and be a leader.

Lastly. If you land on the practice squad first….you’re ok with that?

If I’m on the practice squad, that means I’m on an NFL team and that’s me starting somewhere. I’m ok being a contender as long as I’m there. If I’m on the practice squad I can learn from those around me. I can work on expanding my role and making coaches want to put me in games. If I’m not ready that’s ok – it means I need to learn something and I’m ok being a follower at first in order to be a better leader.