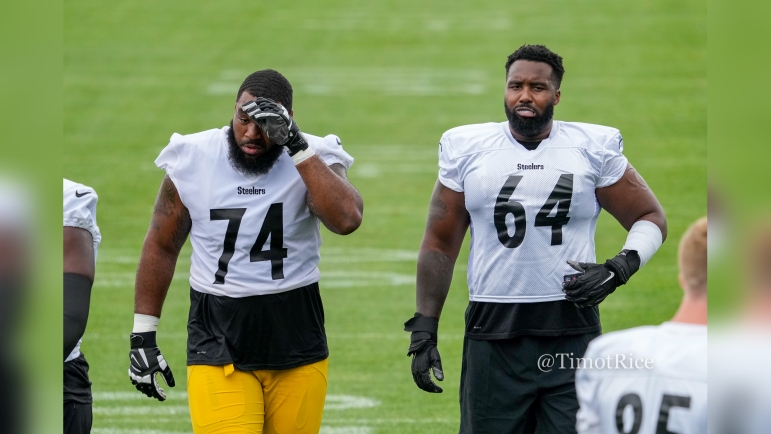 The team will return their starting tackles from a season ago. Chukwuma Okorafor signed a new contract to continue as the team’s right tackle. He was penciled in as the teams left tackle last year but after an injury to Zach Banner he moved back to the right side for the benefit of the team. One outlet had him as a top ten tackle based on pressure rate. He was the most consistent of the lineman last season. He has 37 starts in 48 games over four seasons.

Fourth round pick Dan Moore was thrust into the starting lineup due to injury and as expected had some rough spots. However, over the course of the season he did show resiliency and made strides but there is room to improve. Playing over 1,000 snaps with five penalties and seven sacks allowed shows the difficulty he had but he has acknowledged his performance and ready to continue moving forward. He started all 16 games he appeared in in 2021 and will man the left tackle spot.

Like several of his teammates, Joe Haeg was asked to do more than was expected over the course of the season than what was expected when the season started. Initially signed as depth to possibly play the tackle eligible role, by the end of the season he had played snaps at every offensive line spot other than center. Overall he played over 300 snaps and started two games. His pros and cons are highlighted here and he is in line to be the swing tackle in 2022.

The roster will likely have four tackles and here are the candidates.

The veteran Scott was signed in February and has worked with the team’s new offensive line coach Pat Meyer when they were in Carolina and Los Angeles. He has primarily played tackle in his career but has played some guard as well. In four seasons, he has played in 55 games with 19 starts.

On the positive side, familiarity with the offensive line coach is an advantage for him already understanding what the coach wants in his blocking scheme. As with most of the offensive line he too has some positional flexibility. He has the most playing experience of these three players and is a solid run blocker.

On the negative side, a film study done by our Jonathan Heitritter showed some issues. He noted his struggles with his technique in pass protection and with locating his assignment. He was a reserve with the Panthers and they were not a good team.

Green enters his second season in Pittsburgh. After not making the team out of camp in 2021 he was signed to the practice squad. In 2021, he made to the field in just two games with only four total snaps on special teams. A former third round pick of the Dallas Cowboys, this is his sixth season with four teams playing in 39 games with 8 starts.

On the positive side, the team has seen him for a year and has a good idea of what he can do. He is veteran with starting experience albeit limited. He has good size and length and has a solid punch in pass protection when he times it right.

On the negative side, he hasn’t played an offensive snap since week 16 of 2020 against Pittsburgh when he was with the Indianapolis Colts. In another Heitritter film room, he noticed poor footwork and play strength in his play.

A local player from Duquesne University, Dixon had an interesting route to the NFL. He began his collegiate career as a volleyball player before switching to football. He played in 50 games with 24 starts before signing as an undrafted free agent.

On the positive side, he plays to the whistle and has displayed his aggressiveness early in camp. He has good size and patient hands. His athleticism is a strong point showing in his footwork in college to mirror blockers and agility to get to the second level.

On the negative side, he is a small school player who will have a bigger adjustment than players from Power 5 schools. He is a rookie trying to beat out veterans and received no offensive snaps in the first preseason game. His length is below average for tackles with his arms measuring at 32 1/8th inches. His technique will need improvement with pad level vs power rushers and awareness on stunts.

Also on the roster – Jordan Tucker