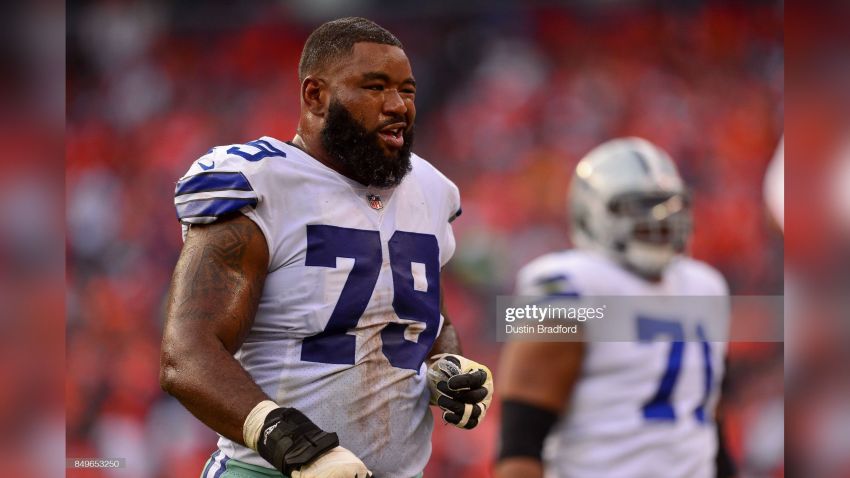 Shortly after news broke that the Pittsburgh Steelers were intending to sign EDGE Melvin Ingram to a one-year year, it was reported that they were also signing OT Chaz Green to a one-year deal. Green was originally drafted by the Dallas Cowboys in the 3rd round of the 2015 NFL Draft. He missed a majority of his rookie season to a hip injury but proceeded to play in 18 games the next two seasons for the team, starting six of those games played. Green then spent time on the rosters of the Saints, Broncos and Raiders the next few seasons, mainly serving as a reserve OL but appeared in four games and started one for the Raiders.

This past season, Green played in 15 games for the Indianapolis Colts, starting only once. Given the need of options that can contribute on a murky unit upfront for Pittsburgh, I did an analysis of Green’s tenure in the league to see if he has anything to contribute to Pittsburgh to help his chances of making the roster out of training camp.

Coming out of Florida, Green had the measurables and athleticism to make him an intriguing project to try and develop into a starting-caliber tackle in the league. He measured in at 6’5, 314lb and had a 33 3/8” arm length and 10 7/8” hand size. Throw in a 5.16 40-yard dash and a 29.5-inch vertical jump and you have a good-looking tackle prospect from a scouting perspective.

There are some moments where that promise shows up on tape, like this rep versus the Rams in the preseason where Green shows good footwork off the snap in pass protection and lands a solid punch on the outside shoulder of the DE, shocking him back and neutralizing his rush.

After that, it honestly gets pretty hard to find the good in Green’s tape. While he has functional athleticism for the position, he appears to have no idea how to use it on a consistent basis. Green has a really bad habit of freezing his feet in pass protection, relying on lunging forward and trying to reach on his punch rather than mirror the pass rusher and stay patient and wait on his initial punch. This can work on a quick set if hand placement is good, but often times Green doesn’t have a strong punch on the defender across from him, whiffing on the block and watches his man run right past him to eat at the QB.

Here against Arizona, we see Green completely freeze at RT, not even landing a hand on the rusher as he stops his feet as the defender crosses his face for the sack forced fumble.

Another example here against Jacob Martin of the Texans as Green is too slow in his pass set, not getting a solid punch on Martin who easily turns the corner into #17 Philip Rivers for the sack on 3rd down.

If you have heard of Chaz Green’s name before, it’s likely due to his atrocious game against the Falcons where Adrian Clayborn recorded six sacks on the night due to his awful play. Watch him pause his feet and drop his head as he lunges forward on the pass rep, having Clayborn blow right past him for the easy sack.

Here is another sack from the same game where Green initially picks up Clayborn but stops his feet and allows Clayborn to spin inside, not being able to maintain his grip as he spins right into the lap of Prescott for the sack.

When Green loses his block and doesn’t move his feet, he immediately resorts to holding his opponent. Pittsburgh should be well-aware of this, as they saw it first-hand last season when matched up with T.J. Watt as it appeared that he was trying to hold Watt on nearly every pass rush snap.

You would think that with more time and experience in the league that Green would improve in his technique, right? Not so fast, as this rep for the Broncos in the preseason of 2019 where he oversets to the outside at LT, being so concerned about losing the edge that he gives away the inside counter, standing too far upright and allows the edge rusher to get underneath his shoulder and shove him back, finishing at the QB for the hit as he lets go of the pass.

For being 6’5, 314lb, Green has poor play strength and plays with bad hip bend and anchor at the point of attack. He is easily driven back into the backfield and loses regularly to power rushers. Here in this preseason matchup against the 49ers, we see Green get uprooted by the DE on the snap, getting knocked back almost immediately and is unable to reset and gets hoisted back until the defender hits the swim over his shoulder, forcing the ball out early from the passer.

If you want a laugh, here is Green trying to go toe-to-toe with #99 J.J. Watt, standing way too upright from the snap and gets walked back into the lap of Rivers as Watt sheds him and falls to the ground, watching Watt finish at Rivers for the takedown.

Some may ask if Green could kick inside and play guard, as he has mostly been a turnstile thus far in his six-year NFL career. Believe me, teams have thought of that and tried, but have had no success. Dallas played him in some games extensively at guard, but the result was the same. Here we see Green show off athleticism on the pull to the left and locates the defender at the second level and squares him up, but barely shocks #93 B.J. Goodson, allowing him to fall off his block almost instantly and make the tackle on #21 Ezekiel Elliott, ending what would have been potentially a big run.

In summary, this this short analysis answers any questions whether or not Chaz Green should make the roster. Frankly, given the film he has put out there at this point, this must have been a camp body signing of a guy Kevin Colbert and Mike Tomlin were looking at back to his days coming out of college to get him in the building.

Just looking at a list of FAs available, I personally would have had them go with a familiar face like Jerald Hawkins or a swing guy on the interior like Austin Reiter than wasting my time signing Green. Pittsburgh should have no expectation of him making the final roster or even the practice squad based on what he has done this far in his six-year NFL career, and should he make the team, you better hope he never sees the field otherwise Ben Roethlisberger may be leaving the game on a stretcher.

I know I will come off as harsh here, but I would rather sign a FA to fill a need elsewhere and have a legit chance to compete for a spot rather than a guy I know that can’t play. To close, I will quote R. Taverner who said, “Better the devil you know than the devil you don’t know”, meaning I would rather roll with one of the UDFA or future contract guys on the roster and give them a chance than a guy like Green I know can’t hold up if thrown into the fire.

What are your thoughts on the Chaz Green signing? Do you agree that he is merely a camp body, or that he has a chance to push to be a depth piece for this team in 2021? Please leave your thoughts in the comments section below and thanks again for reading!