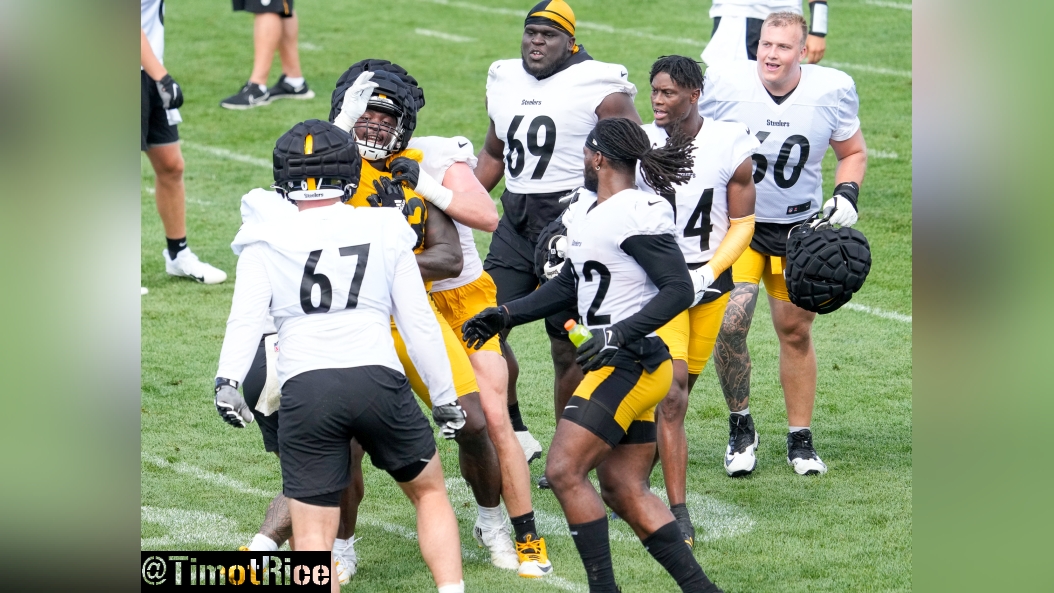 One of the stories in training camp that has attracted the most attention thus far was a minor brawl that ended the third practice session on Friday. In the middle of it was Jake Dixon, a rookie college free agent from nearby Duquesne, who, in his mind, was simply trying to put himself in the best position to have a chance to have a job in September.

Based on first-hand accounts, on the final play of practice, Dixon was engaged with defensive tackle Khalil Davis on a run play, and had perhaps gotten a bit too aggressive for longer than was required for the play.
Davis took umbrage to it, beginning the chain of events that culminated in his twin brother, 2020 Steelers draft pick Carlos Davis, to rush onto the field—having not been in the play himself—to have a go at Dixon himself.

The rookie spoke with Jeff Hathhorn of 93.7 The Fan after the incident, though for a general interview, but he did get asked about the skirmish. “Just play to the whistle and things ended how they did”, he told Hathhorn about his version of what happened. “Going hard and trying to mix it up. It’s the third day of camp and trying to get after it”.

Of course, Davis—both Davises, really—are also engaged in a roster battle, seemingly on the wrong side of the numbers game. None of them want to look bad or to be shown up, because you never know what the coaches are going to see at any given time.

Beginning training camp at right tackle, Dixon has begun taking some snaps at guard. Showing position versatility would be crucial for the chances of any young lineman in his position to make the team, whether on the 53-man roster or even on the practice squad.

Dixon, the 24-year-old, first arrived at Duquesne in 2017, as a tight end. He converted to the offensive line during his true senior season in the COVID-19-shortened 2020 campaign, playing and starting all five of the Dukes’ games that year. He started all 10 games last season, earning first-team all-conference honors.

The Steelers could potentially have an opening at the end of the roster along the offensive line. The starting lineup will include Dan Moore Jr., Mason Cole, James Daniels, Chukwuma Okorafor, and either Kevin Dotson or Kendrick Green, with the other serving as a backup alongside J.C. Hassenauer and Joe Haeg.

That is your top eight offensive linemen, but there is room for another tackle-capable lineman, of which Trent Scott and Chaz Green are the two most likely veteran options. John Leglue is another possibility, who started some games at left guard at the end of last season but is also tackle-capable, and even center-capable.