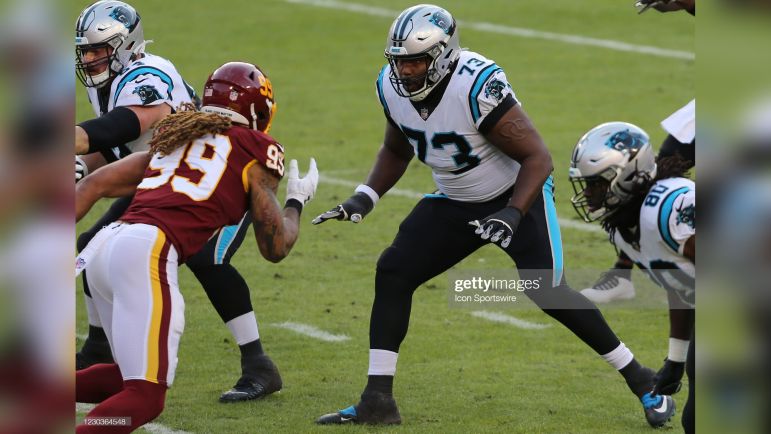 This Friday, the Pittsburgh Steelers signed veteran OL Trent Scott to a one-year deal. Scott’s signing ended up causing OG Malcolm Pridgeon to get the axe as a corresponding move, being released from the 90-man roster. It was widely expected that Pittsburgh would look to add a veteran to the OL room after bypassing the position entirely in the 2022 NFL Draft. The team did add UFAs James Daniels and Mason Cole during the early stages of the offseason to shore up the interior of the OL, but the OT position could stand some more depth with Chuks Okorafor and Dan Moore Jr. penciled in as the starters with Joe Haeg and Chaz Green being the notable backups on the roster.

Scott brings versatility to the OL, having started 19 games and seen action in 53 games total at LT, RT, and RG since coming into the league in 2018 as a UDFA out of Grambling State. When it comes to measurables, Scott matches what Pittsburgh looks for in their OL, standing 6’5, 320lb with 9 1/4” hands and long arms at 34 3/8”. This length makes Scott an intriguing option both inside and outside and is one key trait that OL Coach Pat Meyer looks for in his players. It makes even more sense since Scott has played under Meyer the last four years, 2018 and 2019 in Los Angeles and 2020 and 2021 in Carolina

When you pop in the tape on Scott, you see an athletic blocker that does his best work in the running game. He is competent of playing out in space and getting a body on a defender in attempt to spring runners into the second level of the defense. Here is a play from last season where Scott lines up at RG and locates #45 Deion Jones of the Falcons, sealing him off jus5t enough for #30 Chuba Hubbard to run off his backside for the TD plunge.

Scott’s movement skills as a lead blocker and ability to get a body on a man show up when asked to play multiple positions along the OL. Watch this play against the Buccaneers where Scott fakes the down block initially before getting on his horse to go pick up the CB on the WR screen pass. Scott takes a good angle to the defender and delivers a nasty decleating pancake block on the defensive back, planting him into the turf as #12 D.J. Moore takes the screen pass all the way for six.

Still, when you go through Scott’s tape when asked to pass protect, you often find yourself wanting to cover your eyes. Pro Football Focus charted Scott as one of the worst OGs last season with a 39.6 overall grade, racking up three penalties and a sack allowed on 335 offensive snaps. Going back to his pre-draft profile, Scott notably struggled producing strength and power, only producing 15 reps at the bench during his Pro Day. Combine poor upper body strength with his tendencies to pop straight up and play with poor hip/knee bend in pass protection, and you get reps like this one against the Giants, getting walked right back into the lap of the QB for the sack.

PFF wasn’t more kind to Scott back in 2019 when he started nine games for the injured Russell Okung at LT as Scott finished the season with a 49.4 grade, playing 827 snaps and gave up eight sacks and was called for ten penalties. Watching this performance against the Raiders, you see clear issues with Scott in terms of syncing up his hands and feet, often playing with poor lateral shuffle, dropping his head, lunges forward, and shoots his hands with poor placement. His punch often results in a meager push of the defender rather than latching and sustaining his blocks. That’s where Scott allows the edge rusher to get around the corner like we see on several pressures shown below.

Here is another example with Scott playing LT for the Panthers. He initially does a good job establishing the depth of the pocket against #55 Zadarius Smith coming from the wide-9 off the edge. However, Scott lunges forward and shoots his hands to meet Smith rather than trusting himself to sit and anchor against the rush, allowing Smith to swipe down his hands as he easily gets around the corner and sacks #5 Teddy Bridgewater in the pocket.

Despite having the requite size and length, Scott has been a liability when asked to pass protect as a bookend tackle. Would he stand to do a better job if kicked inside to guard? Honestly, not really. Granted, Scott would be allowed to play in a phone booth instead of worrying to sync up his feet and hands to establish the depth of the pocket. Still, the same issues occur when playing guard as you see here against the Giants as Scott immediately pops up and punches with his right arm, turning his shoulders inside to allow an open path for the defender to run right by him as his whiffs on his punch, nailing the QB as he let’s go of the football.

In short, Trent Scott is an experienced, position versatile OL that has played both at guard and tackle during his brief NFL career with starting experience. He is well-versed in working with Coach Meyer given their previous relationship at Carolina and Los Angeles, thus making him familiar to the blocking system he’ll be asked to play in While having some flashes of good play as a run blocker, Scott mightily struggles as a pass protector, playing with poor technique with both his upper and lower half, often getting antsy and tries to establish contact with a pass rusher for fear of being beat by power or speed. Along with his technical issues, Scott struggles to often locate his assignment, taking himself out of plays entirely.

The signing of Scott makes sense for Pittsburgh to bring in a familiar face that has worked with a new OL Coach and add a player that can play at guard or tackle. When comparing Scott to OT Chaz Green, Scott does provide more versatility than Green and is a little better in the run game. Still, both are liabilities as pass protectors and should be seen as break-glass options only in the case of emergency. Scott would be best suited for a practice squad role as he shouldn’t likely make the 53-man roster. Pittsburgh would be wise to sign a more proven presence to provide depth at OT before the start of the season as Scott does add to the room but doesn’t inspire confidence.

What are your thoughts on the signing of Trent Scott? Do you think that he could take Chaz Green’s spot on the roster? Do you think he is a better fit at tackle or guard? What are his chances of making the regular season roster? Please leave your thoughts in the comments section below and thanks again for reading!