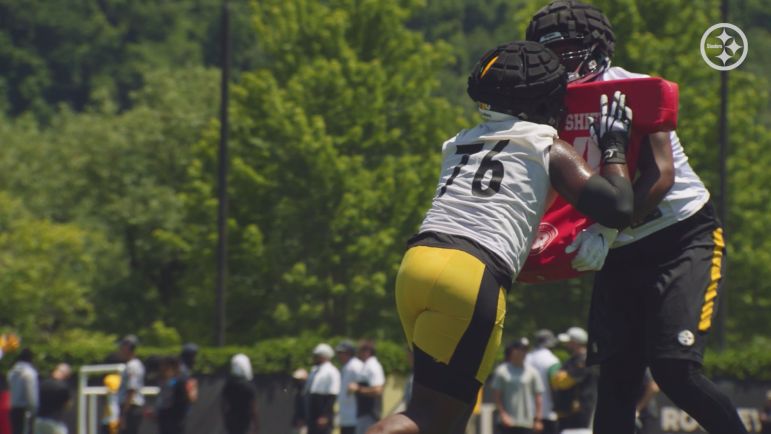 The Pittsburgh Steelers entered this offseason knowing that they had to improve their offensive line, and they addressed it by going out and getting two new starters in James Daniels and Mason Cole. However, the rest of the offensive line projects to remain the same as it was a year ago, including Chukwuma Okorafor returning for a fifth season after re-signing on a three-year deal.

Okorafor was supposed to move from right tackle to left in 2021, but injury issues shortly before the start of the regular season forced an abrupt change of plans, shuffling him back to the right side so the then-rookie Dan Moore Jr. could play on the left side, where he was much more comfortable.

It might surprise you to learn that Okorafor actually finished the 2021 season ranking 10th among all qualifying tackles in pressure rate according to Pro Football Focus, allowing pressure on only 3.62 percent of his pass-blocking snaps during the year, of which there were many.

But what does that really tell us about how he played? The fact that the Steelers offense had by far the shortest time to throw obviously skews the numbers. The fact that Okorafor only had a 63.0 pass-blocking grade says a lot about how pressure rate is more of a team statistic than a player statistic.

Yet we can look at Moore. He allowed 46 pressures, sixth-most amongst all qualifying tackles with 600 or more snaps in pass protection, with roughly the same workload. Double the amount of pressures is a very significant difference.

There wasn’t really a prevailing trend in Okorafor’s performance over the course of the season, at least based on PFF’s game grades. He started off the season with a couple of his worst grades in pass protection, and that’s how he finished off the season as well, but the periods immediately succeeding the beginning of the year and preceding the end offered his best play. His best games were in weeks three, four, 14, and 15.

Now, both Mitch Trubisky and Kenny Pickett have a tendency to hold onto the football. That’s going to be bad for the entire offensive line’s pressure rate. But can Okorafor and Moore continue to grow, hopefully with better coaching from Pat Meyer, and perhaps with better support from the interior offensive linemen? Because chances aren’t good that either of them will be in the top ten in pressure rate this time in 2023.