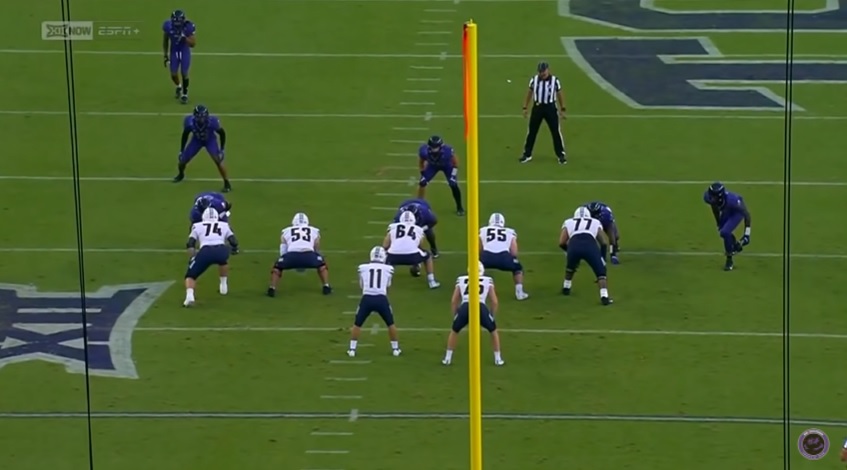 Now that the 2022 NFL Draft is over its time to look at those players signed as priority undrafted free agents. Today, I’ll be profiling an offensive tackle and Pittsburgh native from nearby Duquesne University.

There are so many interesting stories behind these players. Jake Dixon initially decided to play volleyball in college before he chose to come back and play football. The athleticism is apparent and he was a smooth mover at left tackle in college.

As a pass blocker, he used a mix of quick sets and vertical sets. In the quick sets he had good snap quickness and patient hands delivering a solid punch. He displayed good lateral agility to mirror pass rusher to keep him between the quarterback and the defenders. On vertical sets, he displayed good footwork to maintain a half-man relationship going up the arc and he used a solid punch or chop to keep rushers off balance. His awareness versus stunts was adequate overall but there was improvement over the season.

At TCU, as the left tackle he shows good footwork and balance to mirror the pass rusher.

At LIU, he will calmly take the rusher up the arc and past the quarterback.

As a run blocker, they ran mostly Zone schemed runs but there was some Power mixed in. On inside Zone runs he was usually tasked with hinge blocking on the outside. I really liked his mobility on Combo runs to block down before climbing to the second level. On down and base blocks he used good pad level, aggressiveness and leg drive to displace defenders. Didn’t see him pull or be used to reach block on outside Zone but he agility leads me to believe that is possible.

At TCU, he executes a nice combo block to get movement on the down block before climbing to the second level and squaring up the linebacker.

Here are a couple examples of him firing out to turn or drive defenders to the second level.

At Wagner, he will slingshot the defender on this draw play and shows good mobility to the second level though the block could have been a little better.

His pad level was a bit high and would be susceptible to power rushes at the next level. Improving his grip strength and play strength would allow him to sustain blocker longer. Quicker defender could cross his face into the B gap and early in season he would chase the penetrator on stunts leaving the backside open.

At TCU, the defender will dip inside and beat him to get in on the tackle.

At Wagner, he will miss with his aggressive chop causing him to lean forward and lose the defender to the inside.

On run blocks he didn’t lock on to defenders leading to marginal sustain. Defenders were able to get into his body and shed is block. He will get too aggressive on some base blocks getting over his toes. Limited run scheme in college and didn’t see him attempt to execute some blocks.

At Wagner, he will get out over his toes on this run block and the defender ends up sending him to the ground.

Overall, Dixon has good size, agility and athleticism. As a pass blocker he was used often in vertical and quick sets and displayed patience with his hands, good timing with his punch and agility to mirror defenders. He did well keeping a half-man relationship on vertical sets and solid change of direction to follow counters. As a run blocker he shows good athleticism and aggressiveness when executing his blocks.

Areas to improve include adding grip and play strength to lock on to defenders and his mental processing of twists and stunts. He has room to add weight and strength to allow him to handle NFL players. Improving his balance and ability to sustain on run blocks would be beneficial.

Dixon is an interesting player. His athleticism and frame fit what you want in a left tackle but his arm length is concerning. At just over thirty-two inches it puts him below average which may make him eventually move to guard. I’m curious to see what kind of improvements we could see getting him with NFL coaching to match with his athleticism. I can see him being kept on the practice squad as a developmental lineman and getting him coached up while adding strength.

Games Watched: 2021: Vs Sacred Heart, At TCU, At LIU, Vs Central Connecticut, At Wagner