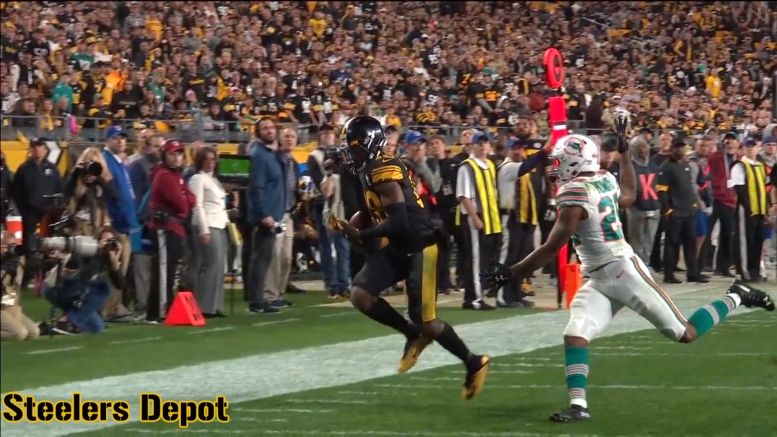 This series will move forward with a look at Johnson’s targets in the Steelers Week 8 home game against the Miami Dolphins. In that game, Johnson had seven targets of which he caught five of them for 84 yards and a touchdown. His average targeted distance against the Dolphins was 12.6 yards past the line of scrimmage and his average completion distance on his five receptions was 8.2 yards past the line of scrimmage. 43 yards were gained by Johnson after the catch against the Dolphins.

Johnson’s first target against the Dolphins came midway through the second quarter and wound up being a catalyst play of sorts. With the Steelers offense backed up deep and quarterback Mason Rudolph not off to a great start in the game, Johnson ran am out-route just past the chains on the left side of the formation and against man-coverage. Johnson ran the route well and had plenty of separation at the top of it against a good cornerback in Xavien Howard. Rudolph delivered an on-time throw to Johnson and the receiver made the catch to move the chains at an important time and drive in the game.

Johnson’s second target against the Dolphins is one he would likely want to have back. This incomplete pass happened later in the first half and on a third-and-9 play. On the left side, Johnson ran a deep stop/hitch route outside the numbers. At the top his route and break, however, Johnson lost his footing and fell to the ground momentarily. The pass from Rudolph was to the inside of the field and Johnson was unable to get to the pass. He had plenty of separation on the play and an easy completion was likely to happen had he not slipped.

Johnson’s third target against the Dolphins came later in the second quarter and it was a against a corner blitz with zone coverage. Johnson ran a short underneath crossing route at the snap of the football and was wide open in the middle of the field after working right to left. After Rudolph failed to see Johnson initially, the wide receiver reversed course back toward to middle of the field after running into an occupied zone on the other side of midfield. This smart move by Johnson allowed Rudolph to find the wide receiver for a small gain on first-and-10.

Johnson’s third catch of the game was a big one and it came late in the first half. On this play, the Dolphins came with an all-out blitz and a blown assignment in the secondary resulted in Johnson being able to run free underneath as a hot option. Rudolph quickly got the pass out to Johnson in the middle of the field and the wide receiver had plenty of room to run. Some nice running and a few key blocks down the field later, Johnson scored a touchdown. It was a 3-yard reception followed by 42 yards gained after the catch.

Johnson’s fourth catch against the Dolphins came later in the third quarter. On this 12-yard curl/stop route by Johnson on the left side of the field and outside the numbers against off coverage,, Johnson once again gets great separation at the top of the route and uncontested as the Miami cornerback is turned facing the sideline. The third-and-8 pass from Rudolph is right in Johnson’s gut and the wide receiver easily catches it past the sticks for a first down.

Johnson’s final catch of the game against the Dolphins came early in the fourth quarter and via a curl route just outside the numbers on the left side of the field against off coverage. Once again, Johnson had nice separation on the route and it made for him being an easy target for Rudolph. The play resulted in a first down as well.

Johnson’s seventh and final target against the Dolphins came midway through the fourth quarter and it was a deep pass from Rudolph down the right side that fell incomplete. On this play, Johnson, who started on the left side of the formation on a nasty split, ran the deep over right on a Yankee combination against man-coverage. Johnson did an excellent job of getting separation on the play and had the throw been on target, it would have resulted in an easy catch and a first down. Rudolph was likely anticipating Johnson to end his route more vertical and deeper and that’s why he threw the ball where he did. This incompletion can probably be chalked up to poor communication and anticipation. Even so, it should have been a big gainer.