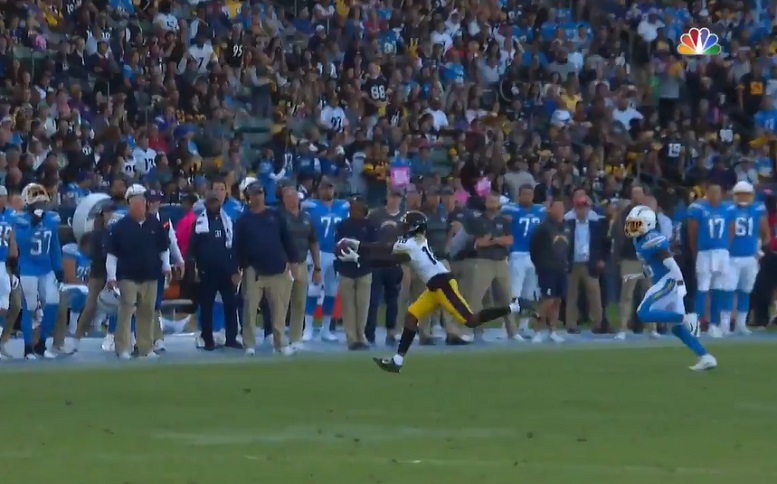 This series will move forward with a look at Johnson’s two targets in the Steelers Week 6 road game against the Los Angeles Chargers. In that game he had two targets of which he caught both of them for 14 yards. His average targeted distance against the Chargers was 1.5 yards past the line of scrimmage and his average completion distance on his two receptions was the same at just 1.5 yards past the line of scrimmage. 11 yards were gained by Johnson after the catch against the Chargers.

Johnson’s first target against the Chargers came early in the second quarter and once again it was a run game alliterative, a wide receiver sweep that included a flip forward in the backfield. On this play, Johnson motioned left to right just before the football was snapped and quarterback Devlin Hodges quickly flipped it to him on the move. Johnson took the forward flip 4 yards behind the line of scrimmage and with the offensive linemen on the move, made a smart decision to cut back into an opening just inside the numbers. Johnson made one would-be tackler miss on his way to gaining 7 positive yards.

Johnson’s second and final target against the Chargers came before the midway point of the second quarter. On this second-and-7 play, Johnson, who was lined just outside the numbers on the left field side at the snap, ran a 12 yard curl/hitch route against off zone coverage. Johnson was seemingly the last read of Hodges’ progression on the play. As Hodges drifted out of the pocket to his left. Johnson did as well as he worked back to his quarterback. Hodges’ pass was outside of Johnson and toward the sideline and the wide receiver did a great job of hauling it in just prior to going out of bounds for a gain of 7 yards and a first down.