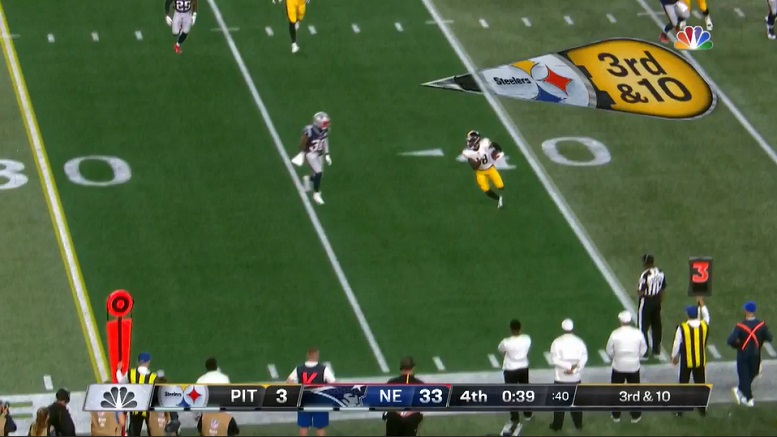 This series will start with a look at Johnson’s five targets in the Steelers Week 1 road game against the New England Patriots. In that game he had five targets of which h caught three of them for 25 yards. He also had one drop in that game. His average targeted distance against the Patriots was 9 yards past the line of scrimmage and his average completion distance on his three receptions was just 1.3 yards past the line of scrimmage. 21 yards was gained by Johnson after the catch against the Patriots.

Johnson first target against the Patriots came late in the first quarter and on a third-and-20 play. Johnson ran a shallow underneath crosser against man-coverage provided by Patriots cornerback Jason McCourty. Not only did Johnson have nice separation on the underneath route, he also made a nice catch as the pass from quarterback Ben Roethlisberger was a tad high. Johnson caught the pass 2 yards past the line of scrimmage and gained another 9 yards after the catch before McCourty tackled him.

Johnson’s second target against the Patriots also came on a third-and-long play only this time it was later in the second quarter. On this target, Johnson was on the right side of the formation and out wide and the play was a designed wide receiver screen to him. After making a nice catch on a pass from Roethlisberger that was a bit out in front of him, Johnson was able to make one Patriots defender miss him on his way to gaining 8 yards after the reception.

Johnson’s third target against the Patriots came on a first-and-long play later in the third quarter. This time it was a deep pass from Roethlisberger to Johnson down the right sideline with Patriots cornerback Jonathan Jones providing tight coverage. Johnson never was able to get Jones stacked on the deep route and thus never had any separation down the field. The pass from Roethlisberger to Johnson was a bit long and landed slightly out of bounds to boot.

Johnson’s fourth targets in the game against the Patriots came early in the fourth quarter and on a first-and-10 play. It’s one that Johnson would likely want to have back as well. On this play, Johnson ran an inside slant against off coverage provided by cornerback Jones. Roethlisberger delivered a quick pass to Johnson just inside the numbers, but the young wide receiver couldn’t corral it with Jones closing quickly for the hit and tackle attempt. The football harmlessly fell to the ground and Johnson had his first official drop of his NFL career.

Johnson’s fifth and final target against the Patriots came late in the contest. After lining up as the lone receiver on the left side of the formation and on the boundary side, Johnson ran a pivot route against man-coverage from cornerback McCourty. He had excellent separation from McCourty on the route and was an easy target for Roethlisberger. Johnson caught the pass 2 yards past the line of scrimmage and gained another 6 yards after the catch.