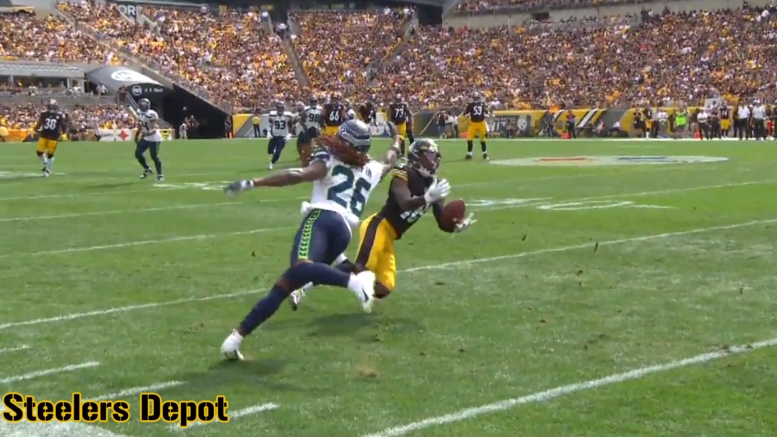 Johnson’s first target against the Seahawks came early in the second quarter and on a second-and-5 play. Johnson ran a shallow underneath crosser against man-coverage out of the slot on the left side and had to alter his route sightly to avoid a Seattle linebacker attempting to wall him off from the middle of the field. Johnson had plenty of separation after avoiding the linebacker and quarterback Ben Roethlisberger find the young wide receiver after going trough his reads from left to right. Roethlisberger’s throw to Johnson was a tad high and the wide receiver couldn’t corral it for what would have been a first down. This incompletion we ruled a drop by Johnson, his second of the season.

Johnson’s second target against the Seahawks didn’t come until the start of the fourth quarter. On thus play, Johnson, who was lined up outside to the right on the boundary portion, ran a nice comeback route against Seahawks cornerback Shaquill Griffin. The pass from Steelers quarterback Mason Rudolph to Johnson was off target and back to the inside of the field, however, and it forced Johnson to adjust his body to make a catch, which he amazingly did. Not only did Johnson make a nicer catch on a bad pass, he was able to get up off the ground quick enough to gain a few more yards. It was a nice third down conversion by Johnson.

Johnson’s third target against the Seahawks came on a first-and-10 play later in the fourth quarter. It wasn’t much of a target on this play, however, as Rudolph threw the football into the ground a few yards short of Johnson due to him being tackled while releasing. Johnson was open as he had run a sit-down route against a cover-3 zone blitz defense. Had Rudolph gotten the football to the open Johnson earlier, there was extra yardage to be gained.

Johnson’s fourth target in the game against the Seahawks came one play after his third one. On this target, Johnson began the pay lined up outside to the right on the field side. At the snap, Johnson ran an out route and was open for a quick throw. However, as Rudolph held on to the football, Johnson turned his route up the field and down the right sideline against Seahawks cornerback Jamar Taylor. While Rudolph’s eventual throw to Johnson was on target, it was too high and deep for the wide receiver to catch with Taylor tight in coverage.