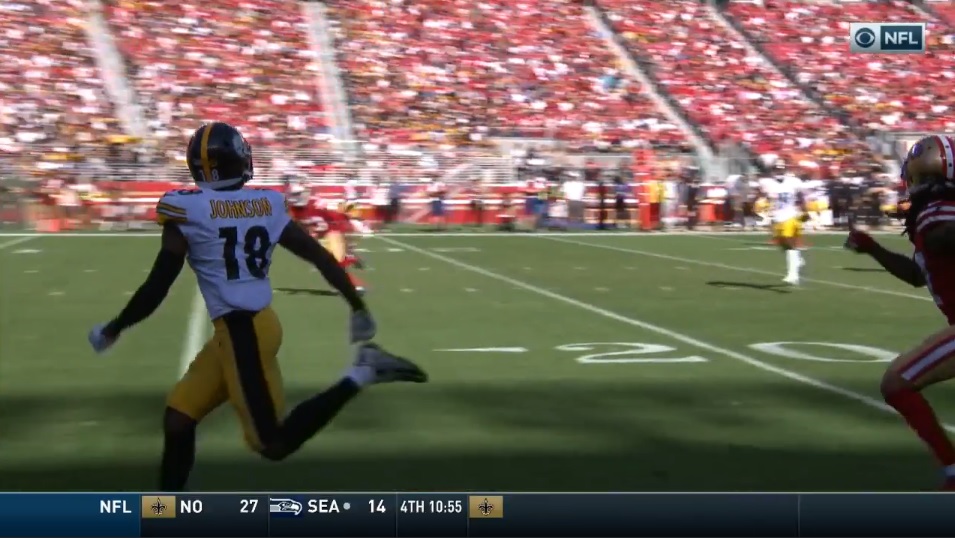 This series will move forward with a look at Johnson’s six targets in the Steelers Week 3 road game against the San Francisco 49ers. In that game he had six targets of which he caught three of them for 52 yards and a touchdown. His average targeted distance against the 49ers was 12.8 yards past the line of scrimmage and his average completion distance on his three receptions was 12.3 yards past the line of scrimmage. 15 yards were gained by Johnson after the catch against the 49ers.

Johnson’s first target against the 49ers came in the first quarter and on a third-and-5 play. Johnson ran a shallow underneath crosser from left to right on the play and had plenty of separation from the cornerback on that side. However, a dropping defensive lineman on the play seemingly spooked Johnson on his run toward the middle of the field and it resulted in him letting up some. The pass from quarterback Mason Rudolph wound up being off target and just out of the reach of Johnson as a result of the wide receiver letting up on his route. It’s hard to rule this as a drop, but it sure seems like a pass that should have been completed and ultimately moved the chains as well.

Johnson’s second target against the 49ers was an out-breaking route on the right side of the field against off coverage. The timing between Rudolph and Johnson was seemingly off on this play and Johnson may have been expected to continue his route a little further to the sideline after breaking at around 7 yards down the field. The pass from Rudolph was also a little late and that allowed for the cornerback to read and break on the football. Regardless, it all added up to an incomplete pass on a convertable third-and-5 play.

Johnson’s third target against the 49ers came on a third-and-7 play later in the second quarter. This time Rudolph completed his pass attempt to Johnson, who had run an underneath crosser as part of a mesh concept from right to left against man-coverage. Johnson, who had plenty of separation between the hash marks, caught the pass from Rudolph on the move and a yard behind the line of scrimmage. Afte making the catch, Johnson was able to put on his brakes and make the cornerback who was covering him miss on his tackle attempt. That missed tackle created by Johnson resulted in the wide receiver gaining the 7 yards needed for a first down.

Johnson’s fourth target in the game against the 49ers came late in the first half and it was a quick route to him on the left field side of the formation. After making the grab outside of the numbers and a yard past the line of scrimmage against a zone off coverage scheme, Johnson was able to gain an 5 additional yards on the second-and-10 play.

Johnson’s fifth target in the game against the 49ers came earlyish in the third quarter and on a first-and-15 deep pass play. On this target, Johnson began the pay lined up outside to the left against press coverage that included one deep safety on the field. His release to the outside at the snap was mirrored well initially by the 49ers cornerback who was opposite him. Johnson was able to get the cornerback stacked some with the ball in the air and even had a slight bit of separation. The pass from Rudolph down the left sideline was a bit long and the football harmlessly hit the ground for an incompletion.

Johnson’s sixth and final target in the game against the 49ers came one in the fourth quarter and on a first-and-10 play. This play included Johnson easily running past the outside cornerback on the left side of the field against a cover-3 look by the 49ers defense. Johnson effectively worked into the blind spot of 49ers cornerback Jason Verrett, who was in bail coverage on the play. Verrett certainly wasn’t prepared for the deep route against him and didn’t respect the speed of Johnson, either. Johnson had plenty of separation when the pass from Rudolph was in the air and it resulted in a very easy touchdown, which was the wide receiver’s first of his NFL career.