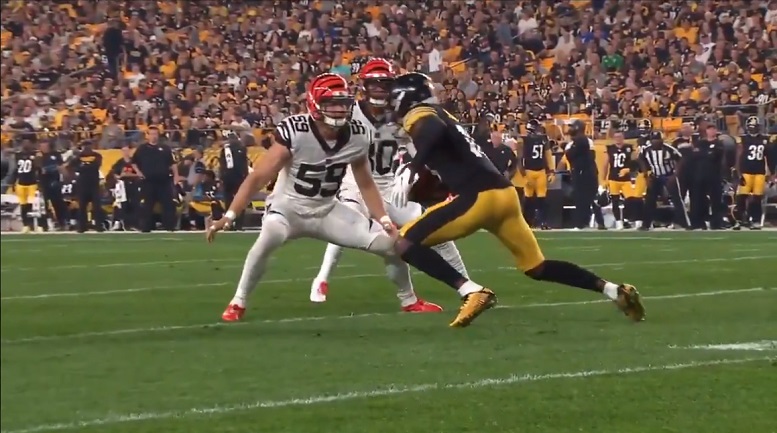 This series will move forward with a look at Johnson’s six targets in the Steelers Week 4 home game against the Cincinnati Bengals. In that game he had six targets of which he caught all six of them for 77 yards and a touchdown. His average targeted distance against the Bengals was 5.3 yards past the line of scrimmage and his average completion distance on his six receptions was also 5.3 yards past the line of scrimmage. 40 yards were gained by Johnson after the catch against the Bengals.

Johnson’s first target against the Bengals was just a catch after a short hitch route on the left side of the formation out of a tight split. While Johnson did manage to get plenty of separation on the second-and-10 route to make an easy catch and get turned up the field, he had the football knocked loose from him by a Bengals linebacker and it resulted in a lost fumble for him.

Johnson’s second target against the Bengals was just a glorified running play. On this play, Johnson receives a short forward pitch from quarterback Mason Rudolph in the backfield following him starting his pre snap motion from left to right. To Johnson’s credit on the play, he read the outside block by running back James Conner very well and cut back inside to an open lane. His nice vision and speed resulted in an 8-yard gain which set up a short third-and-1 situation. This was a very high percentage play to run and a confidence booster for Johnson as well due to the young wide receiver fumbling on his first reception.

Johnson’s third target against the Bengals came later in the second quarter and was another short hitch route from a tight split. Johnson did a very good job of getting and absurd amount of separation on this route which made the target to him indefensible. After making the catch 3 yards past the line of scrimmage, Johnson turned up the field to gain 4 more yards on the first-and-10 play.

Just another short sit-down route for Johnson on his fourth target of the game with this one coming slightly deeper against the zone coverage inside the red zone. Yet again, Johnson has plenty of separation from the closest Bengals defender and after catching the football 8 yards past the line of scrimmage, he quickly tucks and turns up the field to gain another 2 yards to set up a third-and-short situation.

Johnson’s fifth target in the game against the Bengals wound up being a touchdown thanks to a nice play call and poor execution from the Bengals defense. On this play, the Steelers offense had Johnson and fellow wide receiver JuJu Smith-Schuster in tight splits to either side and ran a Yankee-type concept out of it. Johnson, who was lined up on the right side at the snap, ran the deep over route while Smith-Schusrer ran the underneath dig route on the switch combination. The Bengals defense busted in the secondary on the combination as no defensive player went with Johnson on his deep over. This resulted in Rudolph having an easy throw to a wide open Johnson on the left side of the field. Johnson caught the pass and easy strolled the final 11 yards into the end zone uncontested for the touchdown.

Johnson’s sixth and final target in the game against the Bengals came one in the fourth quarter and on a first-and-10 play. This play was almost a carbon copy of his second target and catch of the contest. On his jet sweep out of shotgun, Johnson, who was motioning from left to right again pre snap, receives the short forward flip from Rudolph in the backfield and then does an excellent job of reading the blocks in front him. This time, however, Johnson must show a little more patience and cutback ability outside of the tackle box. His nice read and ability to cut back and up the field results in a gain of 6 yards, a successful play on first-and-10 with the clock running in the fourth quarter.