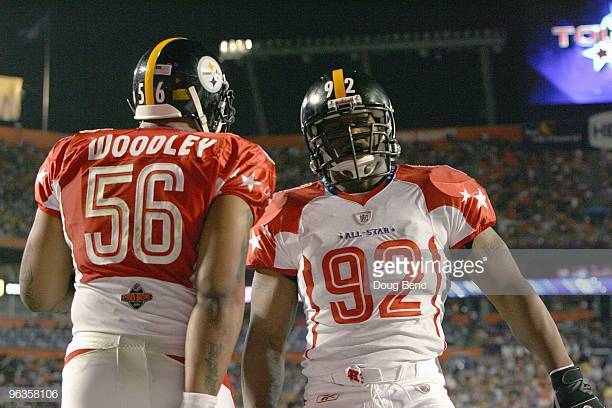 This is sort of a weird part of history. Both players, arguably, aren’t remembered particularly well by Steelers’ Nation. Harrison had an ugly exit with the Steelers, joined the Dark Side in New England, and hung out with Antonio Brown when his relationship with the team disintegrated.

Woddley is definitely not remembered fondly. His departure was also ugly and largely self-inflicted. He struggled with his weight, leading to repeated soft tissue injuries that forced the Steelers to eat the back half of his large contract.

But don’t forget how formidable a pairing this was when each were in their prime. They were the pass rush duo offensive coordinators had nightmares about. Harrison on the right side, Woodley the left. Which one are you blocking one-on-one? Wrong answer whichever you choose.

From 2008 until 2012, when they were both starters, they combined for 99.5 sacks, went to five Pro Bowls, Harrison named twice to All-Pro teams in addition to the 2008 Defensive Player of the Year, and were the bookends of the last dominant Steelers’ defense that propelled them to their 6th Lombardi.

They found a way to turn the heat up in the postseason too. 17.5 combined sacks over that span in the playoffs with Woodley actually having more, his 11.5 to Harrison’s six. Woodley alone had six in the 2008 playoffs. That ties the postseason record since 1982 (when sacks became an official stat), standing alongside Michael McCrary of the vaunted 2000 Ravens’ defense and Hall of Famer Richard Dent.

Everyone remembers Harrison’s made dash to the end zone in that Super Bowl win over the Cardinals but LaMarr Woodley made the game’s last play, strip sacking Kurt Warner, recovered by Brett Keisel, to seal the win.

Harrison’s highlights could full an encyclopedia and he had the best defensive performance I’ve ever personally watched. In 2007 against the Baltimore Ravens, on Monday Night, the 75th anniversary with several legends in attendance, Deebo put up the following stat line:

I did grab this highlight of him matched up against a tight end – uh, bad idea – that led to his strip sack fumble for a safety.

It’s easy and understandable to hold a grudge for how things ended with both players’ time in Pittsburgh. But remember them for the good. Because they weren’t just good. They were elite. And our #3 tandem of all-time.