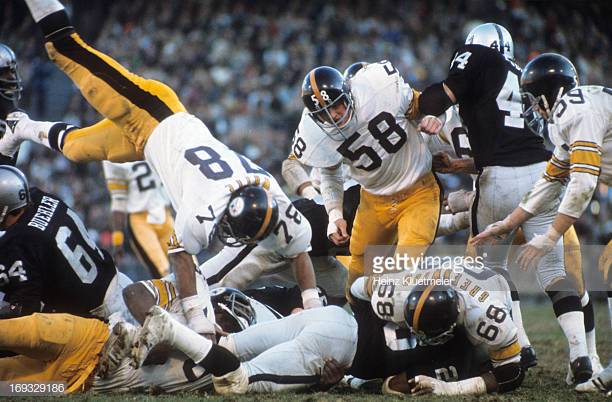 Ok, now we’re getting into the heavy hitters of this list. As much as I love to reflect on the old old history, talking about players like Lynn Chandnois and Big Daddy Lipscomb, guys like Greenwood and White are simply in a different class.

These two had the combination of big talent who played together for a longtime. Greenwood, and honestly I forgot about this until I reread his bio, was part of Chuck Noll’s inaugural draft class in 1969. A steal at that too, one of Bill Nunn’s HBCU gems, selecting Greenwood in the 10th round out of Arkansas Pine-Bluff. White was added two years later with a bit more pedigree, a 4th round pick.

From 71 to 75, these two started all but one game together at defensive end (Greenwood missed one in 1972). Teaming up with Joe Greene and Ernie Holmes in the middle, they formed the Steel Curtain, arguably the greatest defenses in football history.

White quickly made two Pro Bowls and though it took Greenwood until his fifth season for his first such trip, he ended up making it six times, including a pair of All-Pro teams. These two, along with so many others, brought Pittsburgh to their winning ways with each man winning four Super Bowls during the 70s.

Official sack totals weren’t kept in the regular season until 1982, both guys had retired by then, but playoff sacks were logged. Greenwood had 12.5 in his career, five of them in 1975 alone, while White had nine, including three in both ’75 and ’79. Unofficial records have Greenwood at 73.5 while White had 46.

Neither player seem like good bets to make the Hall of Fame. White’s chances hover around zero while Greenwood, despite his compelling case, will have to get lucky and get through the senior committee. But without them, there is no curtain, no blanket of a defensive line that enveloped running backs and quarterbacks with equal glee. Together, they helped make the Steelers a dynasty that history will never forget.