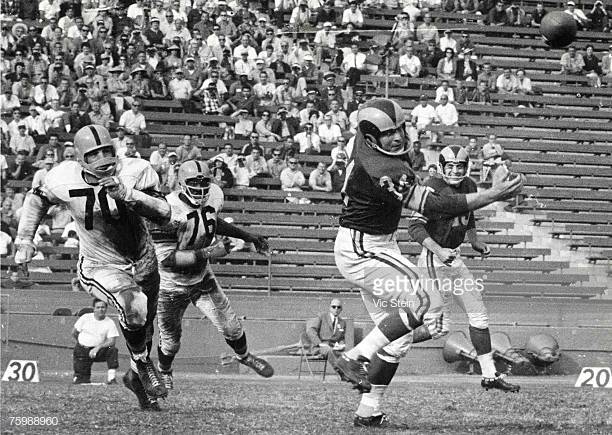 These two played for only the briefest of moments. Stautner was in the twilight of his career, already 36 years old in ’61, and would retire after the ’63 season. Lipscomb’s life would end far too short of a reported, though very much disputed, heroin overdose after the 1962 season.

Stautner is widely regarded as the greatest Steeler of those who played prior to Chuck Noll’s dynasty, though I think Jack Butler at least has an argument to make. He was the first, and until Joe Greene very recently, only player in franchise history to have his jersey – #70 – officially retired.

The Steelers acquired Lipscomb after trading WR Jimmy Orr to the Baltimore Colts before 1961. “Big Daddy” was an apt name for his size and personality. A teddy bear, even (mostly) on the field, kind enough to help running backs up after plowing them into the Earth, built on a 6’6 300 pound frame. For his era, one of the largest players in the game. Stautner, by comparison, was listed at just 6’1 234. Never attending college, the Los Angeles Rams found Lipscomb playing pickup games while serving in the Marines. He spent three years in LA before another five in Baltimore, making a pair of All-Pro teams while with the latter.

In ’61, Stautner made the Pro Bowl. In ’62, Big Daddy earned a berth. The duo played in all 28 games over those two seasons and were one of the top duos of their short time. It’s a shame it didn’t last longer, the reason why they just barely crack the Top 10 and not a couple spots higher.

Unfortunately, finding highlights of both men together are almost impossible. Few pictures exist too. The one seen above in the header certainly isn’t the best look with each man in the background (Stautner wearing #70, Lipscomb #76). But I have found clips of them separately. Here’s just one of Stautner making this tackle in the 50s against the Cleveland Browns.

And here’s Lipscomb with the Colts in 1958 barreling down on a quarterback, leading to an interception.

Guys like these get overshadowed by the era they played in, the lack of the team’s success, and the Steel Curtain forming a little more than a decade later. But for their moment, they were as formidable duo as any in the league. And two guys I don’t want to let any Steelers’ fan forget.