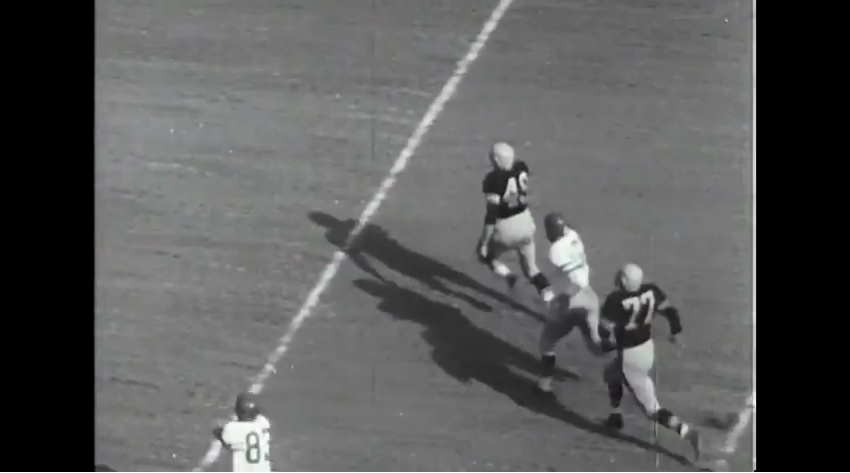 Going off the beaten path a bit for this one. But a duo forgotten to history, ending two years before the the ’58 Title game between the Baltimore Colts and New York Giants put football on the map and an era where the Steelers, in a good year, floated around .500.

But for that time, they were one of the game’s most dynamic tandems. Carry the ball? Yup, especially in the early 50s when the Steelers were the lost to switch from the old-school single wing to more modern T-formation. Catch it? Can do. Returns? Chandnois was the force on kicks, Mathews on punts.

Over that span, here are their totals.

Triple threats. Both of them.

Despite being a lowly 5-7 team, both players made the 1952 Pro Bowl. Since 1965, here are the running back duos to be able to make that claim.

It’s the only time the Steelers have had two backs make the Pro Bowl, too.

Ok, I know that back in’52, there just weren’t a lot of teams. But the Steelers were bad and having those two guys provided some excitement for the fanbase.

Highlights are obviously scarce but here’s a snippet of them. Great concentration and body control by this catch from Chandnois in 1950.

He also famously returned a kick for a TD against the Giants in 1952, had it called back for holding, then ran the re-kick for a touchdown that stood.

Here’s Mathews returning this punt for a touchdown in that Pro Bowl ’52 campaign.

Chandnois’ football career ended too quickly when head coach Buddy Parker in a fit of anger cut him on the spot before the ’57 season. He would later admit he regretted that decision, a duh statement if there ever was one. Mathews would be slowly phased out of the offense but lasted until 1959 before spending a final year in Dallas, named captain for the first game in Cowboys’ history.

To this day, Chandnois remains the best returner in Steelers’ history and remains third in NFL history in kick return average, trailing only the legendary Gale Sayers and Cordarrelle Patterson. Of Steeler players with at least 50 career punt returns, Mathews is second in franchise history, narrowly behind Bill “Bullet” Dudley from the 40s.

Chandnois and Mathews were never going to be Hall of Famers but if you ask me, both eventually deserve places in the franchise’s Hall of Honor.