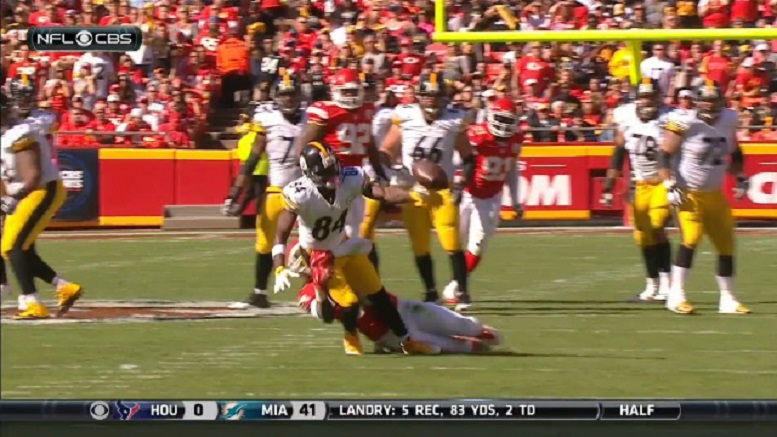 With Ben Roethlisberger and Mike Vick both out injured, Landry Jones made his first career start at quarterback in the Week 7 game against the Kansas City Chiefs and the full week of preparation seemed to get him on track with Brown. While Brown did catch 6 passes for 124 yards against the Chiefs, he did have two misconnects with Jones in the game and one of those was very costly.

The first of two misconnects between Brown and Jones came midway through the first quarter on a 2nd and 5 play. As you can see in the two animated gifs below Brown was tightly covered by Chiefs cornerback Sean Smith and the veteran was able to get a hand in to break up the pass.

The second misconnect between Brown and Jones came with 10:00 left in the third quarter on a 1st and 10 play. After a a quick play-action fake, Jones attempted to hit Brown on a skinny post. His pass, however, winds up being tipped by a Chiefs linebacker and while the deflection wound up in the arms of Brown, the Steelers wide receiver couldn’t gain total possession of the football. His last attempt to corral it causes the ball to bounce forward in the air and into the waiting arms of Chiefs safety Eric Berry for an interception.

Being as this football was tipped, I’m not sure you can charge Brown with a drop on this play. Regardless, I bet he catches this football 8 out of 10 times. Instead of the Steelers having a first down inside the Chiefs 40-yard-line, Kansas City wound up turning this interception into 7 points on their ensuing drive.

Brown did have a solid game overall against the Chiefs and his performance included this deep reception from Jones late in the third quarter. Peters wanted Brown to be called for pushing off on this play but the side judge thought differently.