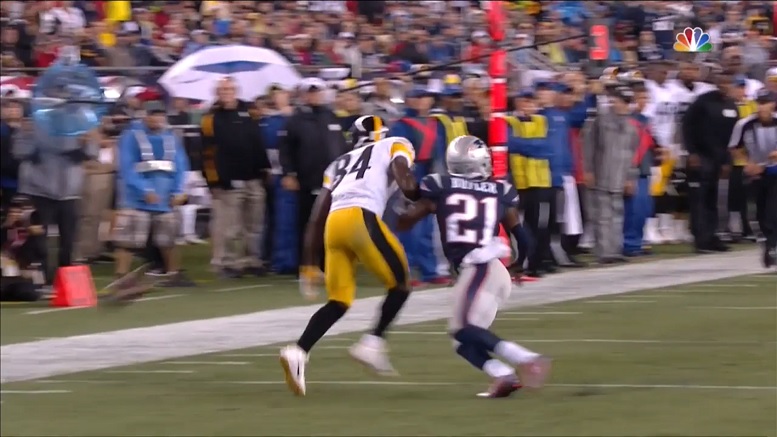 When you look back at the amazing 2015 season that Pittsburgh Steelers wide receiver Antonio Brown had you will see that his 136 regular season receptions came courtesy of 193 total targets. Brown’s 70.5% reception rate last season was no doubt remarkable but with that said, I thought it would be fun to go back and look at the 57 passes that he didn’t catch last season during this slow time of the year.

We will start this series off by looking at the two targets that Brown failed to catch in the Steelers Week 1 road opener against the New England Patriots.

Brown’s first failed target of the season took place in the second quarter on a 3rd and 3 play from the Patriots 28-yard line with 8:46 left in the first half. As you can see in the two animated gifs below, Steelers quarterback Ben Roethlisberger was looking to connect with Brown on a back shoulder throw but the two players weren’t on the same page. It makes you wonder if there was a missed signal or sight read on this play. The result of this failed conversion resulted in kicker Josh Scobee attempting a 46-yard field goal. He missed it wide right and the Patriots took over and ultimately drove 64 yards for a touchdown and a 14-0 lead.

The second pass that Brown failed to catch in the game against the Patriots came in the fourth quarter on a 2nd and 3 play from the Steelers own 27-yard line. It was a short pass over the middle from Roethlisberger and as you can see in the three gifs below, it appears as though Brown stopped his route while Roethlisberger thought he was going to continue it. Miscommunication aside, Brown probably should have still caught this pass even though he would have paid the price for it afterward.

Brown still managed to finish the game with 9 catches for 133 yards and this late touchdown below.