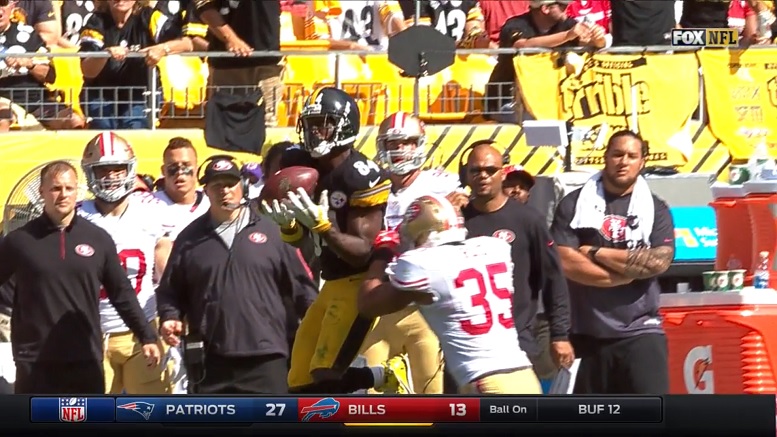 The first incomplete pass to Brown against the 49ers came early in the first quarter and it’s quite similar to one of the two misconnects that he had with quarterback Ben Roethlisberger in the game against the Patriots. As you can see, Brown settles down in the open area of the underneath zone defense of the 49ers and Roethlisberger’s throw is to the inside portion of the field with the middle linebacker quickly closing in.

The second and final misconnect between Brown and Roethlisberger against the 49ers came late in the third quarter on a 3rd and 5 play. Brown easily gets separation against the two-deep safety coverage and Roethlisberger attempts to hit him down the left sideline after pump-faking to his right. Had Roethlisberger really turned this ball loose deeper, there’s a good chance that this play results in a long touchdown based on the angle the safety took after being frozen with the fake. Instead, Roethlisberger tries to drop the ball into Brown and the receiver has to wait on it. Even so, this is probably one that Brown would like to have back as the ball glanced off of his chest prior to him being hit.

As I will do in every one of these posts in this series, I will leave you with a positive catch that Brown made in each and every game. This one below took place very early in the game and it stood after the 49ers challenged it. It’s also worth noting that this catch happened just one play before the aforementioned first misconnect. It was a tremendous catch by Brown good for 28 yards. Brown, by the way, finished this game with 5 catches for 128 yards.