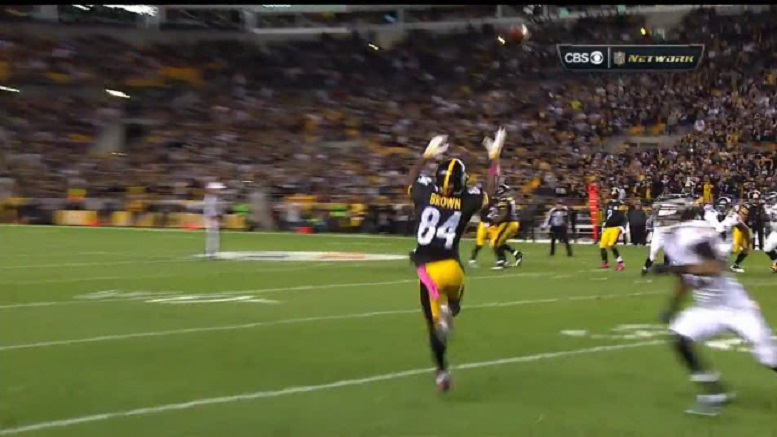 Week 4 of the 2015 NFL season certainly wasn’t an enjoyable one for Steelers fans as the team, who were without the services of injured starting quarterback Ben Roethlisberger, lost 23-20 at home to the Baltimore Ravens in overtime. This was a game Brown likely wanted to quickly put behind him as well as he only managed 5 receptions for 42 yards on 9 total targets. Below is a look at the 4 misconnects Brown had with quarterback Mike Vick against the Ravens.

Early in the second quarter, Vick attempted to hit Brown deep in the Ravens end zone on a corner route even though the Steelers wide receiver never really had much separation. The pass, however, wound up being thrown where Brown was the only one with the opportunity to catch it and it unfortunately slipped through his outstretched hands. The drive, which started in Raven territory, stalled two plays later and it was a key three-and-out in this game.

Brown’s next misconnect with Vick came with 7:27 left in the third quarter and on a 1st and 10 play. While Brown was actually able to catch this pass from Vick after running an out breaking route against off coverage, he wasn’t able to get both feet down in bounds thanks to the throw being too far outside. Vick has to make a better throw in this situation as Brown didn’t have a defender close to him.

With 12:41 left in overtime, Vick again failed to connect with Brown on this crucial 3rd and short play. Did Vick lead Brown too far? Did Brown slow up too soon? It’s hard to say for sure but this would mark the third time we’ve seen an incomplete pass to Brown on a quick in-breaking routes near the middle of the field. The Steelers ultimately went for it on the ensuing 4th down and failed to convert.

I’m sure all of you reading this post remember this next play. With 9:45 left in overtime, the Steelers went for it on 4th and 1 from the Ravens 33-yard-line. The play was another out-breaking route by Brown after he had motioned from left to right against man-coverage. While Brown was open on the play, Vick’s throw was high and to the inside and the wide receiver was unable to catch the ball. A lower throw more to the outside would’ve likely resulted in a first down and potentially a game-winning score.

Tony Toe Tap did wind up showing up against the Ravens in this game as you can see in this late first half completion.