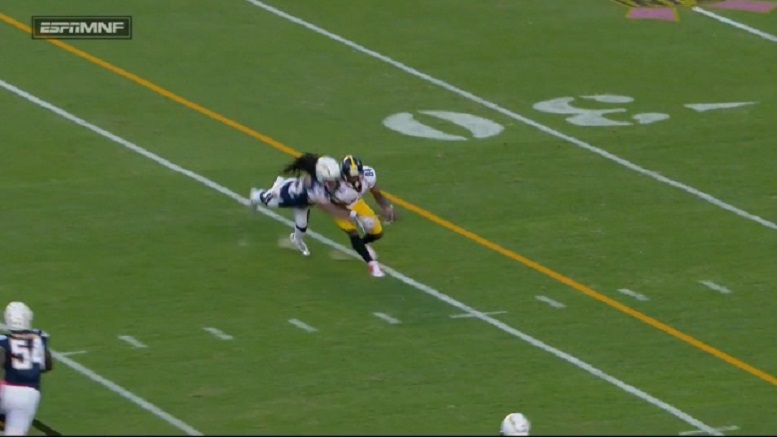 In the Week 5 Monday night game against the San Diego Chargers, quarterback Mike Vick made his second consecutive start in place of injured starter Ben Roethlisberger. While the Steelers ultimately came away victorious thanks to a last-second scoring run by running back Le’Veon Bell, Brown was only able to catch 3 passes in this game for 45 yards on 6 total targets. Below is a look at the three misconnects between Brown and Vick.

The first failed target that Brown had against the Chargers came on a 3rd and 2 play with 12:25 left in the first quarter and it was a deep go route against bump and run coverage. The pass, however, was uncatchable.

With 18 seconds remaining in the first quarter, Vick again failed to connect with Brown on a 3rd and 8 play. On this failed play, Chargers cornerback Jason Verrett had tight coverage on Brown and he managed to get an arm in front of Brown at the last second to deny the completion. Brown got up looking for a flag as he thought Verrett’s other arm was wrapped around him.

With 41 seconds remaining in the game, Vick again tried to connect deep with Brown down the right side against the bump and run coverage of Verrett and once again the Steelers quarterback delivered an uncatchable ball as it landed way out of bounds.

Of the 45 yards receiving that Brown had against the Chargers, 39 of them came on this 3rd and 5 play from the Steelers 18-yard-line with 2:25 left in the third quarter. As you will see below, Brown gets great separation on a short crossing route over the middle thanks to Verrett being rubbed off by tight end Heath Miller. Brown does the rest after the catch in the open field.

If you are scoring at home, Brown has now caught just 8 of the 16 passes (50%) thrown his way by Vick in the last two and a half games for a total of 87 yards. 39 of those yards came on the play above.