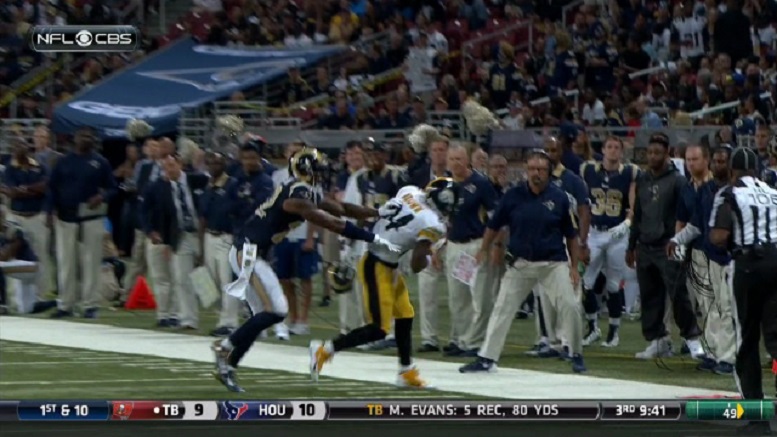 Heading into this Week 3 game, Brown had caught 18 of the 22 passes (81.8%) of the passes thrown his way for 328 yards and 2 touchdowns. In this post I will have a look at the two pass targets that Brown had in the Steelers Week 3 game against the St. Louis Rams that were ruled incomplete.

Brown’s first of two failed incompletions against the Rams came midway through the third quarter on a 1st and 10 play from the Steelers 29-yard-line. It was a simple 12-yard out route to the right sideline and while Brown did actually catch the pass from quarterback Ben Roethlisberger, it was ruled that he didn’t come down with both feet in bounds. In the second gif below, I have zoomed in on Brown’s feet to show you just how close this came to being a good reception. As close as it was, however, Steelers head coach Mike Tomlin chose not challenge the ruling.

Brown’s second failed reception against the Rams came with 10:02 left in the fourth quarter. By that time of the game, Mike Vick had replaced an injured Roethlisberger at quarterback and as you can see in the two gifs below, this particular pass to Brown was an ill-advised throw that probably should have been intercepted.

Brown finished the game with a whopping 11 receptions for 108 yards with a long of 19 and below is a gif of that play which was a skinny post against off coverage.

After three games Brown now has 29 catches for 436 yards and 2 touchdowns and an amazing 82.9% catch rate.