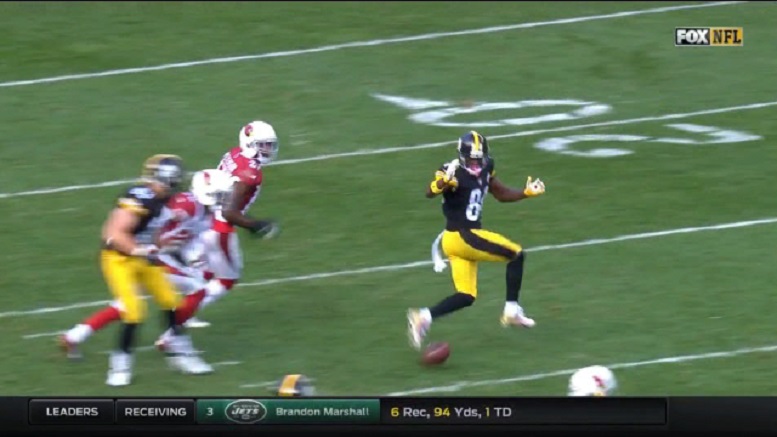 In the Steelers game against the Arizona Cardinals, Brown only managed to catch 3 passes for 24 yards on 8 total targets. Also in the game he was forced to play with two different quarterbacks as Landry Jones was forced to relieve Mike Vick because of injury reasons. Needless to say, the fact that Brown had more miconnections in the game than he did receptions had to have him frustrated and you saw that at various points against the Cardinals.

Brown’s first failed reception came from Vick in the first quarter and as you can clearly see, the pass never made it to the wide receiver as Cardinals safety Tyrann Mathieu read the play well, undercut the route and almost picked it off.

Late in the first half, Vick again failed to connect with Brown and this time it was a deep throw down the right sideline. Once again, Brown never had an opportunity to catch this pass as it landed well out of bounds.

In the second half, Jones replaced the injured Vick and once again, inaccuracy reared its ugly head. On this 1st and 10 play, Brown runs an in-breaking route at about 12 yards and while he was open, Jones threw the football behind him.

Later in the third quarter, Jones again missed connecting with Brown, who had ran a short underneath crossing route. The football actually hit Brown in the leg and it’s really unclear if he or tight end Heath Miller was actually the intended target on the 3rd and short play. after the play was over, you will see Brown raise his arms in disgust.

Midway through the fourth quarter, Jones again failed to connect with Brown only this time it was in the back corner of the end zone. As you can see in both of the gifs below, Brown had a step on his defender yet Jones’ throw was too deep and to the wrong shoulder of the Steelers wide receiver.

While this was probably a game that brown was ready to forgwet about as soon as it was over, he did manage to register this great catch below against the Cardinals in the fourth quarter.

If you are scoring at home, Brown has now caught just 11 of 24 passes thrown his way for 111 yards from Vick and Jones since starting quarterback Ben Roethlisberger went down injured in Week 3 and a good majority of those throws were poor ones.