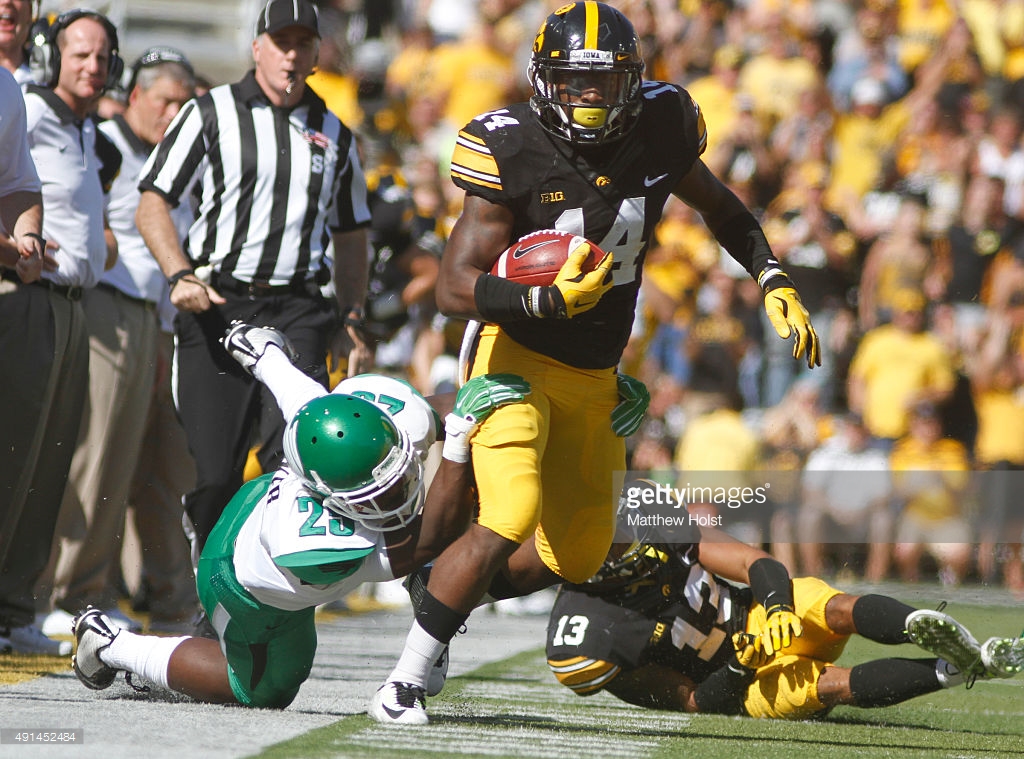 Analysis: I know, I know, given Lynch’s current draft stock, it doesn’t make any sense to project him to Pittsburgh in any round really, as the redshirt junior is unlikely to slip past the first 15 picks as of today. Regardless, we’ll be scouting all prospects here, and I know many of you have expressed interest in hearing my thoughts on Lynch as a prospect, so here you have it.

Lynch is currently my #1 overall quarterback in the 2016 class (should he declare as expected), although much tape study is still to be done. The first thing that jumps off the game film about Lynch is that all the tools are there. He has a strong arm, throws deep with excellent touch and launch strength, and can hit tight windows from the far hash and on the run. There really isn’t a throw on the field that Lynch isn’t capable of hitting with consistency. That’s extremely encouraging for a quarterback who will have to adjust to the speed of the NFL game. If he can get there mentally, his arm is going to do tons of favors for him.

As I said, Lynch is very comfortable on the move, often lacing passes down the field while still rolling out, another testament to his arm strength. When his feet are set, Lynch can really drop tosses in the bucket for receivers vertically. Often high velocity passers don’t know how to take something off the ball and drop it over the top, but Lynch has shown he can do that repeatedly. He very, very rarely under throws his targets, but does need to continue to place the ball deep and stay fundamentally sound under duress in the pocket.

Mechanically there are some flaws with Lynch, but nothing that can’t be fixed or worked around. His throwing motion is a bit unorthodox, as his elbow can flail outside of his frame at times. Think Philip Rivers, but with less finesse on the ball. Most of the time it doesn’t effect Lynch because his arm is so strong he can just rip the ball into a window. In the NFL however, he’ll need to master the mechanics of his passing in order to maximize the velocity he has on each pass. For example, often when the ball leaves Lynch’s hand, it will flutter a bit due to the lack of a tight spiral. With a little more spin on the ball, it’ll become more aerodynamic, allowing it to reach targets even faster. Given the gun Lynch has, that is a scary proposition for opposing NFL teams.

Due to his high release point and how hard he throws, the ball will occasionally dip on driven, intermediate throws, leading receivers into the ground rather than into YAC. It’s nit picky, but something Lynch will have to clean up moving forward. This is another area where his mechanics come in handy too, as better fundamentals will keep Lynch from having to throw so hard and perhaps save his arm in the process.

Lynch has a great feel for pressure in the pocket, showing quick feet and great reaction to step up and fire when needed, or to escape the pocket and buy time to make a play down the field. He doesn’t give up on plays easily, exhibiting fantastic movement skills and fluidity, especially for a 6’7 quarterback. Lynch’s ability to make plays with his legs is an added dimension that defenses are going to hate, with 17 rushing touchdowns in the past three years. His vision and awareness in the pocket or in the field is extraordinary.

Memphis gives him command of the offense too, running tons of RPOs and zone reads with Lynch and trusting him to make the correct decision. He almost always does, and loves to keep the ball himself on big downs in the game. Lynch is a master of the ball fake, a clear dedication to his hard work to become top-notch at an underrated aspect of a quarterback’s game.

I love how Lynch will work through progressions and stay calm in the pocket. Very rarely do you see happy feet or skittishness from the competitive junior. He’s got some gunslinger to him and the skills to back it up, something scouts will love to see. All indications at this point are of a high caliber leader with the gutsiness and mental acumen to get guys to rally behind him. He’s also improved remarkably every year he’s been in college, which doesn’t happen by accident.

So Lynch isn’t perfect, but his skills are such that, in another weak quarterback class, some NFL team is likely going to take a shot at him early in the first round. That won’t be the Steelers, but Lynch’s versatility and ability to run several different offenses will make him attractive to a plethora of NFL schemes.

Analysis: In a class that is awash with talented guards, two of which I’ve already highlighted for you here (Cody Whitehair and Joshua Garnett), Turner has generated a lot of attention this season. He’s got the ideal guard frame, great thickness and power in his build, while short enough to win the leverage battle consistently.

Turner’s ability to play low and get his hands inside on almost every run makes him one of the most powerful run blockers in the country. He can absolutely smash guys on the interior, showing good leg drive to move defenders off the ball. I’d like to see his feet churn quicker, as sometimes he’ll get overextended and fall off his blocks because his lower half can’t keep up with the power of his upper half. But he’s got some mauler to him and works hard to finish every block.

His biggest weakness as a run defender is hitting targets in space due to his lack of athleticism or quickness. Turner has fairly plodding feet, and has a very difficult time hitting second level blocks against linebacker or safeties in the box. He’ll lunge at times trying desperately to reach his block, and get maneuvered around easily. Even against quicker defensive tackles Turner often gets beat off the snap, although he does show excellent recovery speed and awareness to typically drive the defender up the field and out of the play. Turner’s lateral movement skills and work as a pulling guard leave some things to be desired, making him a much better fit in a man-heavy scheme than a zone.

As a pass protector Turner is fundamentally sound, straight back, strong punch, and great arm extension. His hands are quick and carry deadly power form his hips, but it is his target area to consistently pound pass rushers chests that makes him hard to beat. Defensive linemen will try and swat his hands off, but Turner is just too strong most of the time, and if they do succeed he re-sets his hands at lightning speed.

Because he controls defenders so well it limits their pass rush arsenal, and good luck trying to bull-rush the stout Turner. Where you can win as a pass rushers is with your feet, jab-stepping to one side and then dipping around Turner for a sack. He doesn’t move very well side-to-side, and sometimes his feet are stuck in cement. He’s smart and positions well to pick up stunts, but when done swiftly, Turner can have a hard time passing off and picking up a new assignment. Don’t let him lock you up, and you have a chance.

I think Turner will end up being a second day pick because of his lack of scheme versatility, but he does offer some nice value at that point. He’d fit Pittsburgh in many ways, but at this point in the process I’d rather have Garnett or Whitehair.

Analysis: Most seem to think that King, fresh off an undefeated regular season with Iowa, will go pro after this season, but it remains to be formally announced. A tough, physical corner with added value as a return man, King has generated some first round hype in most draft circles this season.

What I like about King is the edginess he plays the game with. He’s well-built with a sturdy frame and hits ball carriers like he knows it. He’s a great tackler and very active in run support, and could thrive in a press defense on the boundary. Iowa even lets him man the slot on occasion, which he isn’t poor at, but I like him better on the outside, where he can dictate the tempo/physicality at the one of scrimmage without worrying about the plethora of route options and releases available to defeat his jam in the slot.

King is a very good athlete with quick feet and an ideal frame for the position. His long speed will be a question mark, but it isn’t a major concern for me, as I believe he’s plenty fast enough to stick with most receivers down the field. King isn’t as fluid as Mackensie Alexander, but he still show good smoothness despite a few technical flaws. Has some little errors that need to be cleaned up like getting too high in his backpedal which hitches his motion breaking on the ball, or missing jams at the line of scrimmage (albeit usually in the slot), or opening his hips too soon. Fixable mistakes, but ones that will be deadly if King can’t get them cleaned up.

King’s ball skills and instincts might be his best traits, with eight interceptions this past season, several of which were excellent grabs. He’s excellent in the air, high pointing the football and battling hard for contested catches. King has the range to play in zone coverage, and if he can clean up his footwork, he might generate even more turnovers.

I think King fits Pittsburgh well as a Cover 3 defender who can play man and set a strong boundary against the run, but he might be more impactful right away in a press heavy system. Seeing that King isn’t the longest corner however, I wonder some if he is going to struggle against longer, more physical receivers. He beat up Tyler Boyd pretty good in their matchup earlier this season, but against Indiana the Hoosiers receivers were more physical with him and he was a little more up and down. If King is there in the second round, which might depend a lot on how he tests, I would take a strong look at him.