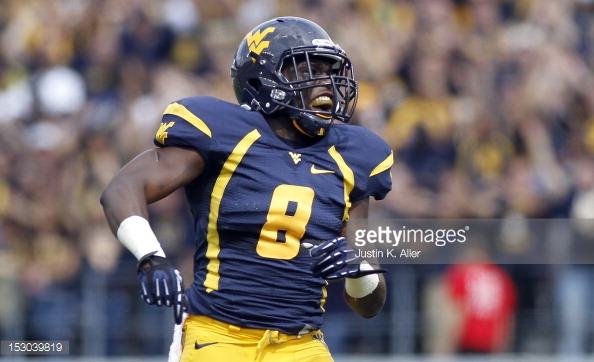 Analysis: I’ve had a number of people ask me about Murphy, so I decided to kick off this week’s report by writing about him. I watched several games of Murphy this summer when he was on the right side of Stanford’s offensive line, and I was impressed. He rarely had to deal with speed rushers, but had the length and stability to protect the quarterback, although his run blocking needed work still.

Unfortunately for Murphy, the departure of Andrus Peat for the NFL forced the senior to move to left tackle, where he has struggled mightily for most of the 2015 season. As a run blocker, I love that Murphy gets out of his stance quickly and can explode to the second level with a great burst off the snap. Moving north-south, he shows good explosion and power to move targets and seal off defenders in the run game.

The problem is that Murphy misses his target too often, or shows poor form in lunging to initiate contact rather than bringing his lower half and driving through defenders. He’ll get over extended and off-balance too often, allowing more powerful defenders to rag doll him aside when his weight gets disproportionate. He fights that 6’7 height too, as defenders will often leverage him and hold the point of attack. The natural power is there, but the consistent technique is lacking. Also, there are deservedly questions about the apparent absence of a mean streak with Murphy.

As a pass protector, it is tough to know where to even begin. Murphy is what Mike Mayock would describe as a heavy-legged, waist-bender, meaning he doesn’t move laterally that quickly in his kick slide, and he has an ugly tendency to double-over trying to land his punch. As a pass protector you want to be flat-backed with a sound base and time your punch to land when the defender reaches you. Murphy’s form is almost the complete opposite, and the result is speed rushers whipping him to the corners and power rushers driving him backward into the quarterback. Sometimes the big offensive tackle will land his punch, which is powerful, but rather than resetting his hands he leaves them there for the defender to chop or grab and rip by. Has to learn to punch, re-set, then punch again.

Murphy’s footwork needs a lot of work, but even at its peak I’m not sure he has the mobility to mirror quicker pass rushers who want to counter him inside. He gave up pressures and quarterback hits all over the place in the games I watched, often because he simply doesn’t move his feet enough. He’s gonna get eaten up if he goes somewhere and they ask him to play right away.

Unless I see something drastically different from Murphy when scouting him further, I believe he needs to go back to the right side as soon as possible. I’m not sure how much success he’ll see there in the NFL however, as many of the better pass rushers in the game currently face the right side on the majority of their snaps. He’s probably a power scheme fit who needs to sit and develop for awhile before entering an NFL starting lineup in whatever tackle spot he feels most comfortable. Right now, Murphy is not ready to be a contributor at this level, and I don’t see him as a fit in Pittsburgh anyway.

Analysis: Years ago, Joseph is the kind of safety I would have hurriedly declared as one of the best in the draft, and dubbed him a first rounder before his senior season was even complete. But, as hard as safeties are to scout without access to All-22 film, I’ve learned my lesson. Joseph is not a great or elite prospect, but he is a good one, who can fill a few roles, and there is certainly plenty of value in that.

Joseph played a lot in the box as a junior, but has had more of a deep safety role during his 2015 campaign, even seeing some single-high action. I don’t think he has elite athleticism or range, but Joseph is certainly serviceable in both areas, with impressive ball skills. I like his closing burst to the football, and his battling mentality at catch points, but he will get boxed out and out jumped by bigger receivers at times. Come across the middle and you best be ready however, as Joseph lives to dish out punishment. He’s also quite physical with receiver’s down the field in man coverage, often jamming opponents to keep them from gaining a clean release.

I don’t see top-notch instincts in Joseph, as he can be a little slow to mentally process what’s happening in front of him. Like most young safeties who love to mix it up in the box, Joseph will take a false step or two at times, and doesn’t have the ideal hip fluidity or speed to recover. He is incredibly physical in the box, taking on offensive linemen with unbelievable ferocity snap-after-snap, but he’s not really strong enough to ever get off of blocks, and he doesn’t have that elite anticipation to beat them to spots. He’ll sift through trash to the ball, but can run himself out of position for stops due to his overaggressive nature.

The WVU senior is a great run supporter, whose motor never slows and whose physicality never wanes. He closes in a hurry on the football, but will take some rough angles and overshoot tackles occasionally as a result. Just something you’ll probably have to live with as an NFL team. Joseph will have some misses that will make you shake your head, but he’ll make up for it by sending a few players to the sidelines throughout the game. His discipline has also improved each year he’s been at WVU, becoming more efficient at wrapping up and aiming better as a tackler.

There are valid questions about his size, as Joseph is probably closer to 5’10 (at best?) rather than 5’11. He’s simply not big enough to play a major role in the box at the next level, but I think Joseph can be used in various ways to help a defense. He’d be excellent in a “robber” role with his ball skills and closing speed to the receiver, as well as his propensity to big hits. And he isn’t a liability as a zone defender, although his spacial awareness could use some work. Every time I watched Joseph cover a running back out of the backfield, that receiver was blanketed, but he doesn’t have the footwork or fluidity to play corner. I want to see more of him, but Joseph will be a ferocious special teams player while he figures out how to mentally process the speed of the NFL game.

Of course, a torn ACL suffered this fall in practice is a devastating blow to Joseph’s NFL dreams, depending on how he heals. There’s no way of knowing how he’ll return from this, or if he’ll be the same incredibly physical player, so concerns are quite valid surrounding the injury. I’m actually stunned that Joseph hasn’t suffered any major injuries before with the way he throws his body around while starting every game at WVU since his freshman year. At this point he’s likely a mid-round pick whose stock could depend a lot on his combine/pro day numbers and his health.

Analysis: Lot of talk about Reed lately amongst the draft world, and for good reason. The senior defensive tackle is part of one of the strongest defensive fronts in college football this season, and is a major reason for Alabama’s success.

Reed is incredibly stout at the point of attack, hardly ever moved or bullied off the ball. He simply controls blockers with his powerful frame, re-routing back by filling space and closing off lanes. As the season has progressed, Reed has become more adept at discarding blocks and working to the ball for stops. He isn’t overly explosive off the ball, but Reed’s first step is solid and he shows a pretty consistent get-off. Not an exceptional athlete, but possesses the lateral quickness to flow down the line of scrimmage to the ball in pursuit.

As a pass rusher, Reed has flashed some nice hand usage, ripping under blocks and clubbing down linemen’s hands to work free to the quarterback. For a big man, he shows a nice little burst to slip past blockers on stunts and twists for pressures. He’s not gonna pile up sacks, but with a little more technical development and explosiveness of the ball, and Reed could become a pass rushing force on the interior.

Little tough to peg Reed’s exact position for the NFL, as he plays all along the Alabama front. He’s not a two-gapper, and I don’t think he’s athletic enough to be an ideal five technique, but I could see Reed playing a 1-3 tech depending on the scheme. I need to watch him more before I peg him as a perfect fit for Pittsburgh, but right now, if Steve McLendon is unable to be retained, Reed would be a fun option to eventually replace him. He’s pretty NFL-ready in many ways, but will need to improve his awareness and play diagnosis to identify the direction of the ball more quickly. His physicality, power, and surprising leverage make him a good match for what Pittsburgh asks of their defensive linemen.