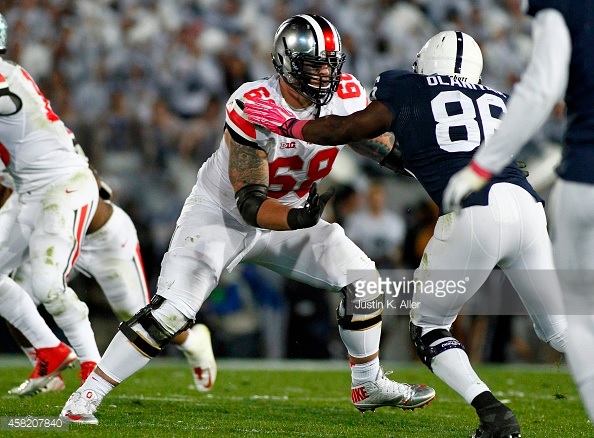 Analysis: One look at Butt, and it is hard not to get excited (see what I did there?). The Michigan receiver is blessed with the size, bulk, and athleticism that NFL teams crave in their tight ends, and Butt is also beginning to generate notable production. Michigan’s offense isn’t exactly setting records, and Butt doesn’t have a quarterback to get him the ball consistently, but he’s shown a knack for winning at catch points due to a massive radius and exceptional highpoint abilities. His jump ball catch between two Utah defenders in the end zone early this year was one of the top grabs of the 2015 college football season.

Butt isn’t without questions however, which may ultimately lead him to return to school for his senior campaign. His blocking is a major weakness right now, as Butt consistently carries his hands too low and shoots too wide on his punch. His overall technique needs a ton of work, as missed punches cause him to overextend and get rag-dolled out of the way consistently. Butt has the effort, the strength, and the frame to become an ideal in-line blocker in time, but right now it is an area of his game that needs serious attention.

Butt is also still developing as a route runner, as he doesn’t currently show much explosiveness out of his breaks. He is an excellent athlete in the air, but on the ground he plays at a slower than desirable pace. Does he have the speed and quickness to separate and win down the field? Can he develop the nuances and footwork needed to become an improved route runner? Big questions NFL teams will have for the Wolverines tight end.

Still, Butt has great hands and the kind of my-ball mentality that can’t be taught. I’m excited to watch his development this season into a more balanced threat, but right now I’m of the opinion Butt could benefit from another year under Jim Harbaugh at Michigan before moving on to the NFL. If he does declare, his workout numbers and the rest of the tight end class could determine his draft slot, but one would think Pittsburgh could be in the market for a tight end. Butt will have to at least show the ability to improve as a blocker moving forward however, or the Steelers won’t give him a second look.

Analysis: Redmond tore his ACL recently in a team practice, a devastating way for the senior’s final collegiate season to end. The injury will undoubtedly leave his draft status in doubt all the way up until draft weekend, as countless medical reports and updates will be examined by each team thoroughly.

I’m here to talk about Redmond’s skill set though, not his potential draft slot. My favorite thing about Redmond is his footwork, as the extraordinarily quick cornerback has the feet to mirror-and-match receivers off the line of scrimmage. His agility and change-of-direction ability are impressive, as Redmond can take the occasional false step and still recover immediately. He’s a very good athlete who has clearly worked hard to become a top-notch technician at the position too. Redmond plays a lot of nickel for Mississippi State, but can press or operate from off coverage adeptly. He’s not afraid to be physical with receivers, and he’ll actively fill a lane in run support or stick his nose into a pile.

Unfortunately, despite his physicality, Redmond is simply not a good tackler at this point in his career. He has a bad habit of dropping his eye level before contact, often flying in with just an arm rather than wrapping up and driving his shoulder through the ball carrier. The Mississippi State corner will also try to strip the ball too often, rather than simply going for the sure tackle. The numbers of misses he had in the three games I studied were alarming, but the desire and the physicality are there, the technique just needs to be enhanced greatly.

I don’t think Redmond is quite six feet tall as his bio suggests, but I’m not ready to say he can’t play on the outside just because of that. I love his feet as a slot corner matchup against shiftier inside receivers at the next level, and I ultimately think that nickel corner spot is where Redmond will thrive in the NFL. His coverage skills are obvious on tape, but he’ll need to eliminate false steps and a propensity to fall for double moves. There are ball skills and tons of ability to be had here when healthy however, including traits that could potentially help Pittsburgh depending on what corners the organization brings back this offseason.

Analysis: Few were as down on Decker after an inconsistent junior campaign as I was, but much has changed for the hulking left tackle this season. Watching Decker’s 2015 tape has been an overwhelmingly positive experience, and while questions still exist, I’m much more comfortable projecting him to a potential left tackle role in the NFL.

First, Decker’s tangibles are ridiculous, with a massive wingspan and salivating length and power for the position. His punch is remarkably effective, but it is his timing that has improved significantly this season, as Decker no longer lunges to initiate contact. Instead, the senior executes a top-notch kickslide, settling into his stance with a stout base and patiently waiting for the defenders to come to him. The technical strides his game has made in pass protection have eliminated a lot of ugly mistakes, a trend that NFL scouts will hope can continue heading into the draft.

As a run blocker, Decker is a first round pick. He is quickly developing a mauler’s mentality to go with his powerful frame, blowing defenders off the ball with destructive hands and leg drive. Decker can straight-up move people, and has the agility to pull and hit targets with smooth technique. Ohio State asks him to execute a bevy of blocks, most of which Decker thrives at. Outside zone blocking steps will likely need time and work, but the offensive lineman has the ability to do it all as a run blocker.

My biggest question with Decker is how quick his feet are in pass protection against speedy edge rushers. I thought his feet were lacking based on his junior tape, and this season I haven’t studied him against any quicker, wide techniques. That will be an area scouts want to see Decker enhance with the pass rushers he’ll face in the NFL. Lateral movements are slightly suspect on tape as well, and Decker’s get-off can be inconsistent.

Pittsburgh desperately needs help at offensive tackle even if Kelvin Beachum is re-signed, if for no other reason than to build up depth and a future at the position. Decker’s ability to fit various run-blocking schemes and his remarkable growth as a pass protector are exciting signs for a bright future. I’ll be watching the rest of his senior season with great interest.