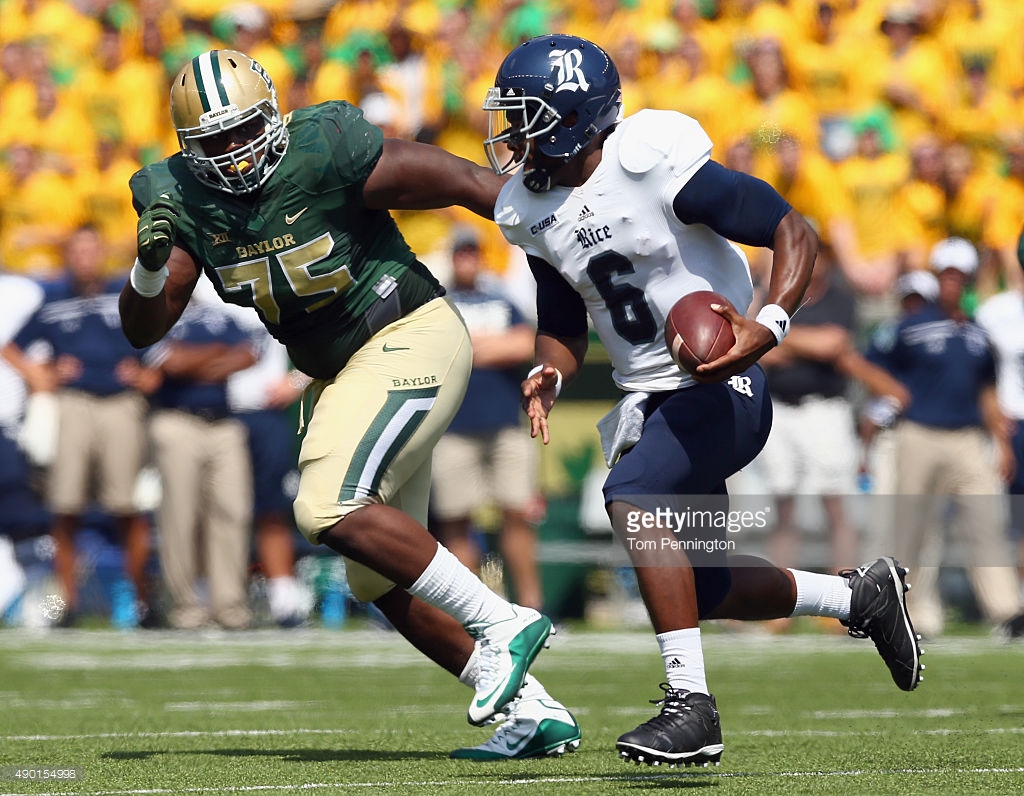 Analysis: 5-10 years ago, Cravens would have been considered a tweener as a linebacker, too small to play in the box consistently and too slow to play safety. The recent success of similar-looking prospects such as Deon Bucannon and Telvin Smith have elevated Cravens draft stock however, as most think he’ll be a full-time linebacker in the NFL despite his size limitations.

Cravens isn’t Bucannon or Smith as a prospect however, for one very big reason and several smaller ones. The USC product simply is not very instinctive and is consistently slow to recognize and diagnose plays, an issue that neither Bucannon or Smith faced in college. With Cravens you want to see a guy who beats blockers to the punch and flies all over the field, but instead he’s more of a methodical mover without great explosiveness or fluidity in the open field. Short area quickness and long speed are both question marks, and the answers should rule out any stragglers still considering a safety role for Cravens at the next level. Even the junior defender has accepted linebacker as his future position, adding bulk for an in-the-box role at the next level according to reports.

Cravens is at his best on the edge, where he can use his long arms and physical mindset to take on blockers and spill runs back inside. He’s clearly not an edge defender at the next level however, and while he may line up there at times, Cravens is too light and not strong enough to man that role against NFL blocking. He struggles mightily to get off of blocks, and his lack of instincts keep him from being proactive against blockers. Bucannon may be small for an inside linebacker role, but he consistently beats blockers off the snap with quickness and split-second reactions. When Cravens has seen more inside linebacker-time this season, particularly against California, he got eaten alive by interior blockers and didn’t have the agility to avoid contact and make stops.

For those reasons I think Cravens is exclusively a 4-3 WLB, and while I think he can start for an NFL defense sooner rather than later, I don’t think his ceiling is what many other draft gurus believe it to be. Cravens will make a couple solid plays every game, but he’ll disappear for long stretches too. He does offer the versatility to step out in the slot and defend flexed tight ends or backs, but I don’t expect Cravens 40 time to be a positive for his pre-draft stock. Technically his footwork can be sloppy in coverage and he’ll give up too much separation for my tastes. He is typically a sure tackler, but will ankle nip in space on occasions due to his lack of lateral quickness.

Because of his expected 4-3 role, I don’t expect Cravens to be in Pittsburgh’s draft plans. There are way better options at strong safety in the draft already, and even if the team saw him as a 3-4 ILB like a few teams reportedly do (how I don’t know), he clearly wouldn’t be a fit given Pittsburgh’s current personnel. I know many Steelers fans will be disappointed to hear that, but I don’t think Cravens will get a lot of attention here unless he posts some shocking numbers in his combine workouts.

Analysis: There are questions about whether Billings will enter the 2016 draft, as his defensive coordinator has apparently told the media he’s convinced the star defensive tackle is returning to school for his senior season. Regardless, I figured I’d include him in volume #3, as many of you requested last week that I write about him for today’s article.

One thing there is no question about is Billings ability. The 6’2, 300-pound defensive tackle possesses some of the most eye-popping raw power in the nation, and his agility for a man his size is simply incredible. As a pure athlete and physical specimen, Billings might be one of the most impressive prospects I’ve ever scouted, but it is his technical development and increased awareness that should make him a top 10-15 pick whenever he declares.

When I watched Billings as a sophomore, I saw a lot of raw talent with very little attention to detail. Watching the junior this year however, I’m amazed by how much his hand usage and upper body mechanics have improved in just one season. Billings consistently utilizes an active upper to dominate blockers at the point of attack, destroying opposing centers and guards when matched up one-on-one. WVU had to double and triple team Billings just to keep him out of the backfield, as the lineman’s rare quickness and burst make him a nightmare to handle off the snap. Billings has a great motor as well, and will work hard to free himself and pressure the quarterback. He’s just beginning to scratch the surface of what he can become as a pass rusher once his movements and hands continue to be developed.

While Billings is incredibly powerful and does mostly play the one technique at Baylor, I would hate to see his disruptive abilities stuck in a two-gapping role in the NFL. He can hold the point of attack with the best of them, but I’d utilize his quickness and power and allow him to gap shoot at least a percentage of the time. Billings is simply so much more than a space eater.

He needs to learn to play with more consistent leverage and hand placement, as he’ll have issues with technical sound guards who get under his pads and angle him out of plays or up the field. But the ceiling for Billings is astonishingly high as an NFL player. I think he could fit in Pittsburgh well even if Steve McLendon is retained as a UFA after this season. The key will be if Billings is still on the board when Pittsburgh selects, an unlikely scenario if he does indeed declare for the 2016 draft this winter.

Analysis: I hadn’t caught Lawson live yet when I went to watch his game tapes, so I wasn’t sure what to expect, but what I saw from him as a pass rusher and a run defender impressed me a lot. Lawson is a little short for an edge defender, but uses his arms extremely well to ward off blockers and set the boundary in the run game. He can be a little slow to recognize plays develop, especially misdirections, but when he does diagnose the direction of the ball, Lawson’s reactions are quick and deadly. He’s physical at the point of attack and shows the upper body strength to shed blockers and make stops, even in space. Lawson will also pursue ball carriers from the backside, and has the speed chase down plays as well.

As a pass rusher Lawson is well-developed for a player who has missed so much time due to injury, consistently showing hand usage that impressed me. Lawson has very quick feet, and made Louisville offensive lineman look silly when they met this fall. He’s very active as a pass rusher with a high motor, but I was impressed with the variety of ways he won at the point of attack. Watched him bend the edge, bull-rush, swim move, and even dance around blockers for pressures and sacks, showing an advanced repertoire and the awareness to set up blockers to fail.

The key with Lawson is simply his health. The junior tore his ACL and missed his sophomore season, and has had hip issues that have held him out a few games this season. If he’s healthy, Lawson is a first round pick no question, and he might be one of the few top-tier edge rushers in the 2016 draft class. With James Harrison’sretirement a possibility, and Jarvis Jones unlikely to return to Pittsburgh after the 2016 season, the Steelers will probably be looking for another young edge rusher to pair with Bud Dupree moving forward. They’ll have to evaluate Lawson’s durability quickly, but even as a shorter defender, the Auburn pass rusher could be a great fit in Pittsburgh if he declares this offseason.