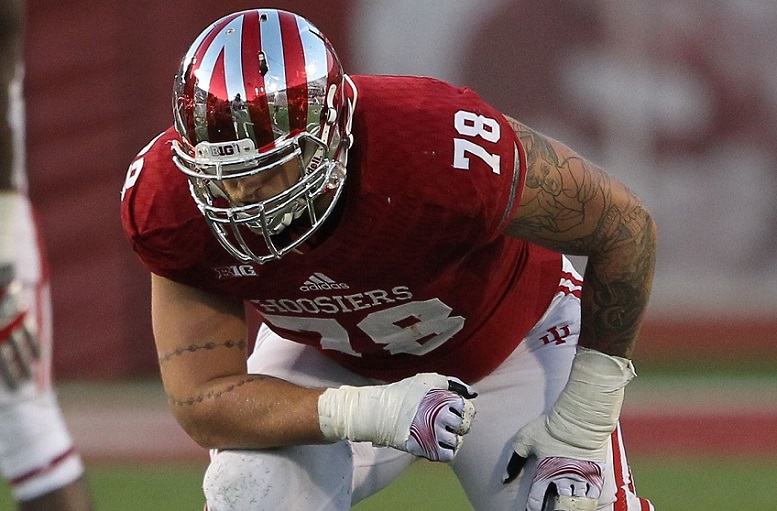 Analysis: Spriggs has been getting a lot of attention lately in the draft world, both for his strong play and his recent Senior Bowl invitation. Here’s what I wrote about the stud offensive tackle this summer when evaluating his junior tape:

“Spriggs is a guy who is flying under the radar a little bit heading into his senior season. He’s light on his feet and quick to hit second level blocks in the run game. Spriggs has some edgy tenacity and works hard in space, but he isn’t a mauler who is really gonna displace guys at the point of attack. His pass protection form looks solid, but he’ll need to develop a more powerful punch for the NFL. In Indiana’s run-heavy offensive approach, pass protection reps are few and far between for Spriggs.”

Fast-forward to the 2015 season, and I was excited to dive back into the tape on a very talented young lineman. Spriggs has extremely fluid feet and is a very easy mover despite such a long frame. All the physical tools are there that you want in an offensive tackle: length, a strong athletic build, and the lower body fluidity and anchor necessary to win at the point of attack. Spriggs can hit second level blocks in the run game due to his quickness, but isn’t really a mauler at the line of scrimmage. He’ll effectively angle block and seal off defenders, but until he learns to win with leverage regularly, Spriggs will have a hard time being the physical dominator in trench battles. He fight that 6’7 frame at times, allowing opponents to get under his pads and walk him back off the snap.

Spriggs has the feet of a left tackle, and can seal the edge with great efficiency. Indiana has thrown the ball a lot more this season due to Nate Sudfeld’s return to the lineup, giving Spriggs more reps in pass protection. Technically he’s still a bit raw, as his punch can get wide at times and he’ll slide off blocks due to getting a little overextended rather than sitting back in his stance. But his hands are strong and he’s not hesitant to be physical with rushers. Spriggs did a great job against Joey Bosa in their matchup, mirroring the defensive end’s movements with ideal change-of-direction abilities.

The Indiana tackle needs to get a bit stronger, and technically he’s not exactly a plug-and-play guy. He’s too upright in his stance off the snap, and speed-to-power guys are gonna kill him until he learns to get that butt down and stop exposing too much of his chest. I would love to see him land with a team that sits him a bit and develops him before asking him to man a major role right away. Spriggs ceiling is extraordinary as a prospect, and he will likely be a name that heats up around draft time. With Pittsburgh looking for a future at offensive tackle, Spriggs could be in the cards for them in the spring.

Analysis: A quarterback? Even with Landry Jones’ emergence as a suitable backup quarterback, the Steelers will eventually have to face the fact that Ben Roethlisberger’s replacement is not currently on the roster. Over the next couple drafts the team should be looking for a desirable developmental player with the tools to someday run the Steelers offense. Wentz, whose season is over a little early due to a wrist injury, could be that prospect.

Prototypical pocket-passing tools are key for a potential starting quarterback, and Wentz has the size and arm strength/velocity to make plays a lot of signal callers simply can’t. He’s calm and collected in the pocket, and can vary his pitch speed on the ball to make passes more catchable for his receivers. He’ll move through progressions well at times, but much of NDSU’s offense involves quick throws to the quarterback’s first read. That is not to say Wentz can’t learn to read defenses at an advanced level, especially considering how smart a kid he is, but he’ll need plenty of time to learn to do so.

His deep ball ability is fantastic, but his accuracy down the field remains hit-or-miss. At times he’ll place the ball beautifully, while other throws are accurate, but fell to maximize the highest potential gain that a specific play could obtain. But Wentz has a gun, and he can fit the ball into a tight window if necessary.

Perhaps my favorite trait about the young passer is Wentz’s athleticism, as the lanky quarterback is a threat running the football as well. He can use his quick feet to evade pressure smoothly in the pocket, typically keeping his eyes downfield while on the move. Wentz will need to speed up his mental processing however, which will come when he’s asked to read more complex defensive schemes and not rely as heavily on RPOs.

Also, Wentz will stand in the pocket and take a shot to deliver a pass, and will fight for every inch as a runner. His ability and competitive fire to extend plays is fun to watch.

Bottom line is that in a quarterback-starved league, Wentz has the tools, smarts, toughness, and athleticism to be a quality starter in the NFL, provided he is given the proper time and coaching before being thrust into a big role. The Steelers could give him all those things, while nailing down a long-term replacement for their franchise signal caller. Wentz fits a lot of what Pittsburgh is looking for at the position, but his draft stock may have quite a journey ahead over the next several months.

Analysis: I’m a sucker for a dominant nose tackle who can battle through blocks and find the football. Always have been, always will be. Clark isn’t a true nose, but lacks the explosiveness of a three technique, so some will debate his scheme fit. What can’t be debated is the fact that Clark is a raw power prospect who can absolutely bully blockers and make stops in the interior of a defense.

UCLA plays some multiple front looks, but Clark typically plays the nose or one technique there, although they’ll move him around on occasion. He uses his hands well to keep blockers off his frame, and has unreal grip strength to discard blockers violently at the point of attack. Clark’s agility for a man his size is startling, as the big defensive tackle has shown the ability to move laterally down the line of scrimmage for stops. Double-teams give him issues, but Clark can typically hold his ground at least, allowing his fellow defenders to take advantage of the occupied blockers and make the tackle.

As a pass rusher Clark’s energy and effort are his strong suit. He shows a great motor to attack blockers relentlessly, typically with a powerful bullrush that actually pancaked Stanford’s center right into the Cardinal quarterback this season. Clark can straight up move people, and does with great frequency. When he learns to incorporated swim and rip moves into his arsenal, the results could be scary. Not many nose tackles can disrupt the pocket as frequently as Clark does, abilities that will be in high demand this spring.

The main question is if Clark will declare this season or not, as many have speculated he’ll return to school for another year. In a healthy defensive line class, that may be Clark’s best move, as he looks to develop his pass rush moves and work on his first step. If he does declare, we could be talking about a top 60 prospect come draft weekend.