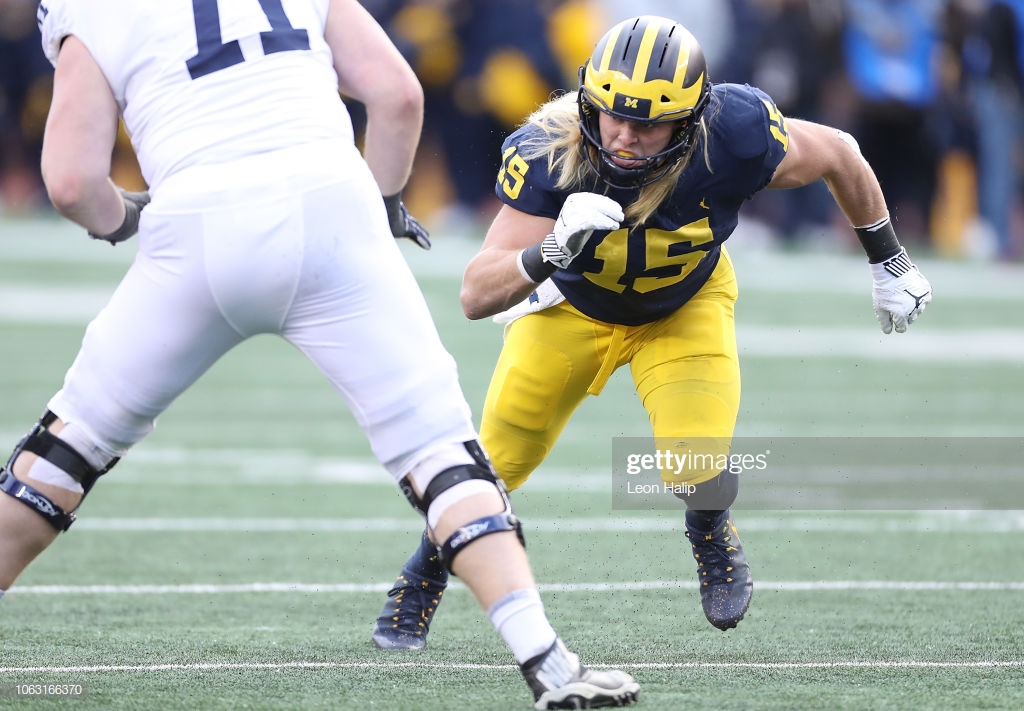 Here we go. My final mock draft of 2019. Which is good because I can’t wait for the speculation to end and us to talk about the players who actually become Pittsburgh Steelers. I’ll be honest though. I don’t think I’ve ever gone back and forth on a mock like I have this one and this draft season. Pretty sure I have Day Three candidates scribbled down on a bar napkin somewhere.

We’re taking all the information we know and the things we *think* we know to create my final edition. The “rules” for creating a Steelers mock and then sometimes, going ahead and breaking them. Now I can’t wait for them to make a trade and throw this whole thing out the window.

If you missed it, I’ll link my previous four mock drafts below. Remember this is what I think the team is most likely to do, not necessarily how I’d draft. And as always, let me know your thoughts in the comments below.

Analysis: Here’s what it came down to in my mind. If Devin Bush is there, or if they can trade up for him (I think they’ll aggressively do so), he’s the guy. But I don’t see him falling to #20 and can’t justify putting him there because of it. Wouldn’t be realistic enough. In order, it came down to these three options for #20: Williams, Darnell Savage, and Clelin Ferrell.

You always gotta go back to what Kevin Colbert says. That broke the tie. Around the Combine, he talked about targeting players who might not be great tacklers but getting playmakers. That’s the #1 thing this defense needs, regardless of position. Williams picked off eight passes in just two years at LSU, thriving against tough SEC competition. And I don’t see his tackling problems as a major red flag. He was physical when he needed to be. Nor do I view him as having character concerns, at least, from my 30,000 foot view.

If anything, I think he is someone with high character and strong values. Check out this ESPN feature piece that delves into his backstory. How he’s fighting to give his mom the life she deserves, all he overcame at a young age, without much money, moving from place to place. He has a daughter now and I think everything points to him buying in and giving top effort to make it in the league.

The toughest part about this is finding the Year One fit, though we know Colbert professed he likes his rookies to sit, even if we know that really doesn’t happen with top two picks. Perhaps Steven Nelson kicks inside, he played the slot until last year, with Williams at RCB. Joe Haden may receive a contract extension but he’s heading into the last year of his deal.

Williams checks all the key boxes you’re looking for in a first round pick. Underclassmen (he won’t turn 22 until December). Athletic (4.37 at Pro Day). Mike Tomlin and Colbert at his Pro Day. And a Power 5 guy. Check, check, and check.

Here’s the bottom line. Williams is the best man coverage cornerback in the draft and the Steelers ran the third most man coverage last year. That gives him the edge over Byron Murphy and for me, the pick at #20.

Analysis: Winovich always made sense here but I had previously reserved this spot for a dime player. But with Savage seemingly having only a slight chance of making it here, I had to go in a different direction and none of the other safety names fit well here. The Tomlin/Colbert Pro Day or pre-draft visit standard is still strong here. Seven of the last eight picks fit that bill.

So I’m choosing the one player we know they had a Pro Day dinner with in Winovich. You won’t find many high effort players like him, showing fanatical effort and routinely passing up his Michigan teammates on film. His three-cone time of sub 7 seconds suggest good bend and really, the dude has plenty of similarities to T.J. Watt.

High-effort, high character players from the Big Ten who both briefly played TE (here’s a photo of Winovich wearing #44 during a short spell at fullback/tight end in 2015). He can come in with a rotational role right away, rock it as a special teamer, and probably take over for Bud Dupree at ROLB in 2020. He’ll still play at least 300 snaps on defense as a rookie, even if everyone remains healthy.

Little older than you’d like but a high floor who can produce right away. Local product, playing high school ball at Thomas Jefferson, is a feel-good element to this pick, too.

Analysis: Sticking with Boykin for the latter half of this pre-draft process and not straying now, especially that he’s gotten serious second round buzz while it sounds like David Sills V will be taken later than I thought. Boykin is a true X receiver this team needs to help replace Antonio Brown. He may be raw and the production not there but he was saddled with ugly QB play in college. In the NFL, he’s getting a Hall of Famer. Ben Roethlisberger likes those big receivers too.

Boykin might not be a Day One starter but by mid-season, he could siphon away snaps from Donte Moncrief. The Steelers showed a ton of interest in the last few months, attending his workout before bringing him in for a visit. Doing their homework on a guy who was a relative unknown in this process with his one-year of production and decision to declare with a year of eligibility remaining.

Analysis: It’s difficult to see this team get out of Day Two without an inside linebacker. The problem is finding a name who fits. The interest hasn’t been there in several of the top guys (Germaine Pratt, Blake Cashman) and the dropoff after the two Devin’s is Grand Canyon steep. Long is a name who fits and even if this is a little earlier than ideal, you have to get your guy when you can. Long is an athletic, explosive playmaker who can run himself out of plays but the Steelers prefer the “woah” guy than “sic ’em” types. Attended his Pro Day, which is still important even beyond the first round, and then brought in for a visit, though he was considered local.

Signing Mark Barron helps tamp down the need to take an inside linebacker right away and Long doesn’t have to play Day One or even all that much Year One. But he’ll create depth and options the Steelers didn’t have last year.

Analysis: Edged out Washington’s Drew Sample as my choice to replace Jesse James. Moreau reminds me a lot of James. Not flashy, isn’t a tremendous athlete, but a good blocker and well-rounded game. In a deep tight end class, he may get pushed down a bit even after an impressive showing at his Pro Day. High character, leader, and wore that prized #18 in college. Just feels like a dude who will become a Steeler. Like Long, Moreau was brought in for a visit after the top brass attended his Pro Day.

Analysis: Here’s where I struggled the most. This does feel late for a dime player, a crucial role to this defense. And Redwine could go higher. He probably should. But this is about the range he’s projected in and I can totally see the interest in him.

The Steelers love SPARQY dudes at safety. That’s what they got in Terrell Edmunds, Sean Davis, even Shamarko Thomas. Redwine hits all those marks. 4.44 40. 39 inch vert. 10’10” broad, put him in the elite category for his Relative Athletic Score (RAS).

He profiles like Davis. Came to college as a corner, moved to safety, and played all over the Hurricanes’ defense. Over slot, in the box, single high, he wore all the hats. Good, not great, production with five interceptions over the last two years and four career forced fumbles.

Secondary coach Tom Bradley attended Miami’s Pro Day. That’s important to note. The U has several DBs worth looking at but Redwine might be the top guy.

He could be that rare Day Three pick who logs significant snaps early on. His experience (30 starts) and versatility signals a good football IQ, allowing him to get on the field soon. They could take him at #83 and I’d be fine with it but the 4th/5th round is where he’s more commonly mocked.

Analysis: Sticking to my guns here on Snell despite the slew of running backs brought in for pre-draft visits. He has the size, power, production, character, and football bloodlines this team routinely picks at the position. Explained why Snell feels like a Steeler in a recent article you can check out here. Eddie Faulkner attended his Pro Day and met with him after the workout.

He might not be my pick but history says he’s the Steelers’ guy.

Analysis: The portly kicker has been a mainstay in my mocks for a couple editions know. It may seem “unlikely” the team selects a kicker, as the team site opined earlier this week, but it was equally, probably moreso, unlikely they’d draft a long snapper or trade up for a punter. Two things they’ve done under Tomlin.

Art Rooney II sent a mandate to improve the kicking game and I think you look for the best guy. Either Gay becomes worth the pick due to a great camp or Chris Boswell gets his groove back. Either way, a net positive for the team. Gay has a big leg and kicked in bad weather games. He’s going to get better too. Only spent two years as a kicker, he played soccer up until 2017, and won the Lou Groza Award his first year with the Utes. Connected on 86% of his field goals. Also handled kickoffs so no issue there.

Analysis: Always good to sneak in a pre-draft visitor late in your mock. Choosing Amadi for similar reasons as Greedy. Not the best tackler but his best traits show up when the ball is in the air. Versatile player who could play free safety or nickel corner. That flexibility is critical for today’s NFL.

Amadi picked off nine passes in 51 career games at Oregon and forced three fumbles. Team captain as a senior and oh yeah, can return punts. Might not have a lot of value for Tomlin but can’t hurt.

Analysis: Checking the non Power 5 selection – smart to have one in every mock – to round things out. But Tate attended the Combine, which is important to the Steelers. Reminds me a bit of Kelvin Beachum. Undersized guy who can move around. Played both tackle spots for the Tigers, 34 career starts under his belt, but he’s probably kicking to guard or potentially even center at the next level. Part of the front five for a dominant offense and known to have a mean streak.

Some off the field concerns to think about, he was arrested for violating probation in 2015, but the fact the team held onto him says something about him changing his ways. Randy Fichtner was at his Pro Day and we know the connection he has to the school.

Just throwing out some names I’ve come across over the last few months. Obviously, more names here than roster spots that’ll be available. Feel like McKnight, Turner, Brumfield, and Odeyingbo have the best shots of signing.