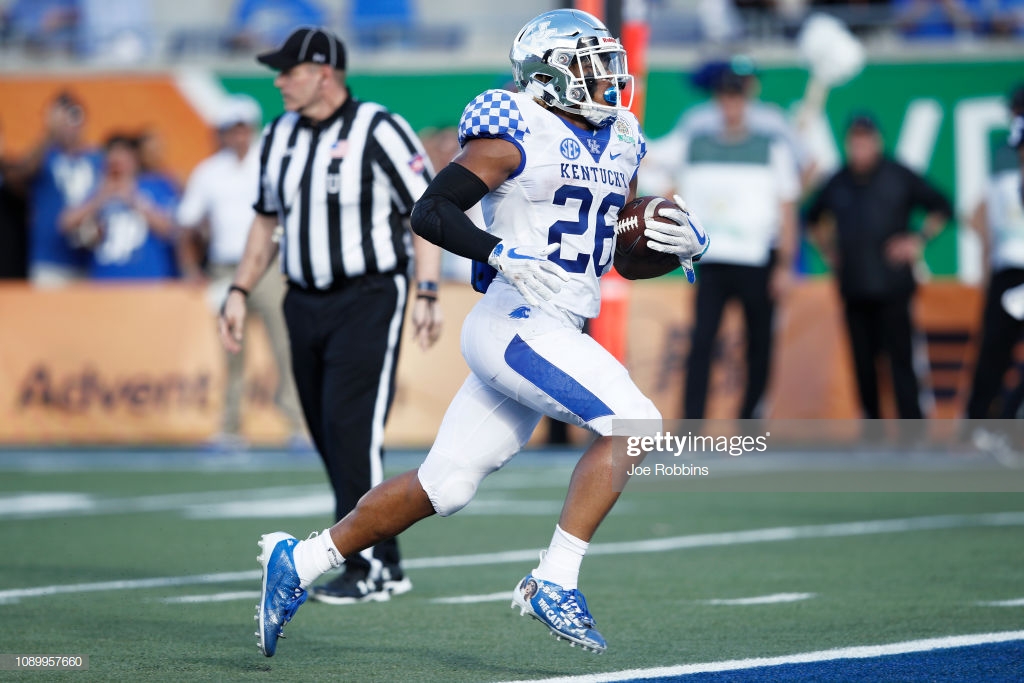 Obviously, trying to “call your shot” for any player, much less one that won’t be selected until Day Three is nearly impossible to do. But if there’s anyone who is worth sticking your neck out for, it’s Kentucky running back Benny Snell Jr.

Forget about what you or I look for or want. For the Steelers and their decisions, that couldn’t be any more irrelevant. In reality, from their standpoint, he checks almost all of the boxes they look for.

No, he didn’t show up in our “what they look for” study. But he was so very close. He missed the 225 pound weight requirement by one pound, the 4.65 40 requirement by one-hundredth of a second, and the vertical benchmark by 1.5 inches. I’m not cutting corners to include him but recognize the slim margin that he missed. Maybe above anything else, the team cares more about size and at 5’10 224, he has it.

Production is huge, too. They draft players with high degrees of college success. Here are the total TD amounts of the backs they’ve drafted since 2010:

Even Rashard Mendenhall had 27 when he functionally worked as just a one-year starter. Randy Fichtner cited Samuels’ nose for the end zone as one of the reasons why they drafted, a belief that if a player can do it in college, he can do it in the NFL.

“He’s here for a reason,” he told the PPG following Samuels’ breakout performance against the Patriots. “About a month ago I said he was one of those guys on tape who scored touchdowns in college. He’s just that kind of guy. He makes plays, and he didn’t let us down last week.”

Snell has that whole group beat with 48 touchdowns, all rushing, despite leaving after his junior season. That’s third in SEC history, trailing only Tim Tebow and Herschel Walker. Names he’s ahead of? Try Bo Jackson, Shaun Alexander, and Leonard Fournette, just to rattle off a few.

All three seasons with the Wildcats, he rushed for at least 1000 yards and 13 touchdowns. It’s unfair to say any one player turned a program around but if you had to pick one guy, it’s Snell. When he arrived, Kentucky football was forgotten behind an elite basketball program, having failed to even notch a winning season the last six years. During that time, no back rushed for anywhere close to 1000 yards.

Immediately there was a change. They went 7-6 his freshman and sophomore seasons, making two bowl appearances, before it all came together in 2018. Kentucky won ten games for the first time since 1977. They knocked off Penn State in the Citrus Bowl, their first bowl win in a decade, with Snell named MVP. He rushed for 144 yards and two touchdowns that day, becoming the school’s all-time leading rusher on this 12 yard score.

2018 also marked the first time in 31 years Kentucky knocked off Florida. They were close many times inbetween but always found a way to flounder by game’s end, like blowing a 21-3 fourth quarter lead in 2003. Not this time. Snell touched the ball on more than half the team’s snaps, racking up over 180 yards of total offense.

Up by four with two minutes to go, Kentucky faced a 3rd and 1. They gave it to Snell, who did a great job of pressing the linebackers inside before following his pulling guard to the left, a 20 yard gain. Their four minute offense worked, giving the Gators the football with just 30 seconds left, and broke the losing streak.

You could tell how much that win meant to Snell. He was interviewed post-game, hardly able to contain his excitement.

With the game on the line, they turned to #26. And he turned the school that loves its football as much as it does basketball. And did so in only three years.

Pittsburgh loves football bloodlines, too. Snell’s got those. His father, Ben Sr, starred at Ohio Northern, rushing for over 2700 yards and 33 touchdowns. The Baltimore Ravens signed him as a UDFA in 1998, sending him to NFL Europe and then taken by the XFL’s Las Vegas Outlaws in 2000.

Great uncle Matt Snell had the most prolific career of the family. Another running back, like I said, it’s in the bloodlines, he was drafted 3rd overall by the New York Jets in 1964. He immediately led the team in rushing but his biggest performance came in 1968, Super Bowl III against the Baltimore Colts. Ya know, the one with Joe Namath’s famous guarantee. Snell helped Namath keep his word, scoring the only Jet touchdown that day and rushing for 121 yards on 30 carries. He retired as the franchise’s leading rusher and still ranks 4th all-time.

We know the Steelers have some level of interest in him, too. Kentucky was one of only three schools we know RBs coach Eddie Faulkner attended during the Pro Day circuit. I found this video of Snell after his workout, saying Pittsburgh was one of several teams he met with. That probably didn’t require him to come in for a pre-draft visit like the other backs did.

I’m not saying Snell is a guy Pittsburgh needs to draft though I definitely wouldn’t hate the pick either. There’s value in going a different direction, getting someone dynamic in the open field, like Oklahoma State’s Justice Hill, who I added in my last mock draft. Again, our opinion doesn’t matter here. Given the Steelers’ history, Snell fits as well as anyone. Don’t be surprised in the least if you hear him name called between rounds four and five.