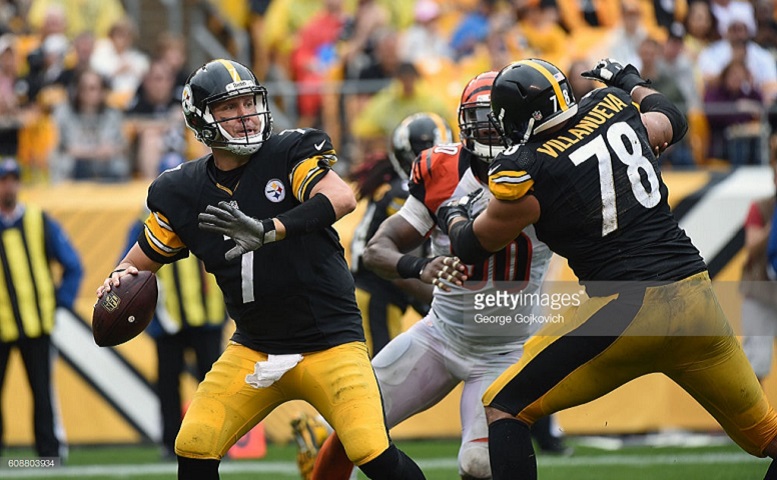 Up twenty-third in this series is a 2017 preview profile of tackle Alejandro Villanueva.

Intro: 2016 was Villanueva’s first full season as the Steelers starting left tackle and while he did struggle a little bit in early games, he was able to deliver a more consistent and better performance as both a run blocker and pass protector as the year wore on. He allowed a team-high 4.5 sacks last season, according to our own breakdowns. He was also flagged 8 times in total last season with three being false starts and three more being holding calls against him.

Current Strengths: Villanueva has shown the ability to mirror against inside counter moves and has exhibited strong hands. His length allows him to seal off the edge even when he’s beat. He can recover and re-punch and position his hands effectively when he fails initially. His stunt recognition and communication with other linemen are also pluses. A former Army Ranger, Villanueva’s work ethic and overall demeanor is as good as it gets.

Current Weaknesses: Villanueva’s overall size sometimes hinders him as he’s been known to allow hands inside his chest and when that happens he can be driven backwards once he loses the leverage game and contact point. His overall balance and footwork when getting to the edge on pass sets could also stand some improvement. He still needs to work at eliminating some lunges and make sure that he keeps his head up. He needs to become a more thorough and deliberate run blocker moving forward.

2017 Outlook: Considering the fact that Villanueva is still likely learning the little nuances of playing left tackle in the NFL after making the move from the other side of the football a few years ago, one has to think that he’ll make some improvements in his overall game in 2017. He could potentially wind up being a bonafide top-ten left tackle in the NFL in 2017 when the season comes to an end.