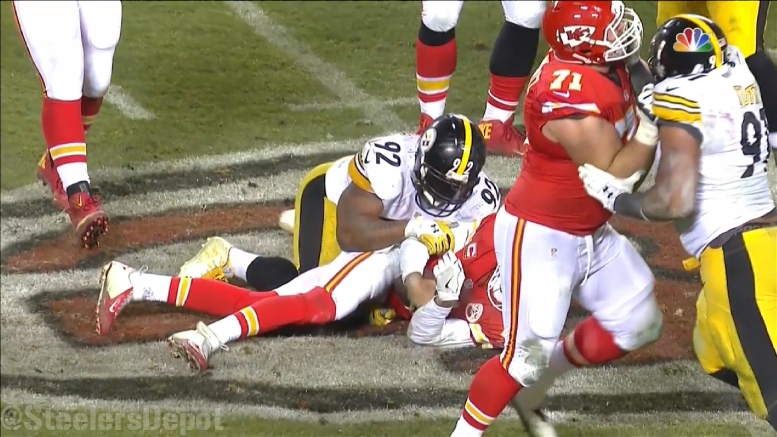 Up fourth in this series is a 2017 preview profile of outside linebacker James Harrison.

Intro: Harrison turned 39 years of age this past March and still shows no signs of slowing down. Last season, Harrison platooned with Jarvis Jones on the right side of the Steelers defense before finally taking over the lion’s share of the snaps from Week 10 on. He led the Steelers in sacks last season with five and was third on the team in run tackles for losses with five of those as well.

Current Strengths: Harrison’s ability to effectively use his bull-rush and rip move off the edge has allowed him to stick around so long. Additionally, he remains one of the league’s best edge run defenders on the right side and very rarely misses a game due to an injury thanks to his effective, yet rigorous, offseason training program.

Current Weaknesses: For several years now, Harrison’s coverage skills have been very limited and mostly include him dropping into hook zones on the outside as he’s just not quick enough to run with eligibles out in space. While Harrison has led all Steelers outside linebackers in sacks the last two seasons, he’s been a slow starter in that statistical category in both 2015 and 2016.

2017 Outlook: With T.J. Watt now in Pittsburgh, he’s expected to eventually take over full-time on the right side. With that said, Harrison will likely open the 2017 season as the starter and eventually give way to the rookie later in the season. Harrison should wind up playing 50-60% of all defensive snaps in 2017 as long as he remains healthy and thus another five sack season figures to be well within reach for him in addition to 10 or so run tackles resulting in either no gain or a loss.

2016 Stat That Matters: Zero sacks in first 7 games and five in last 9