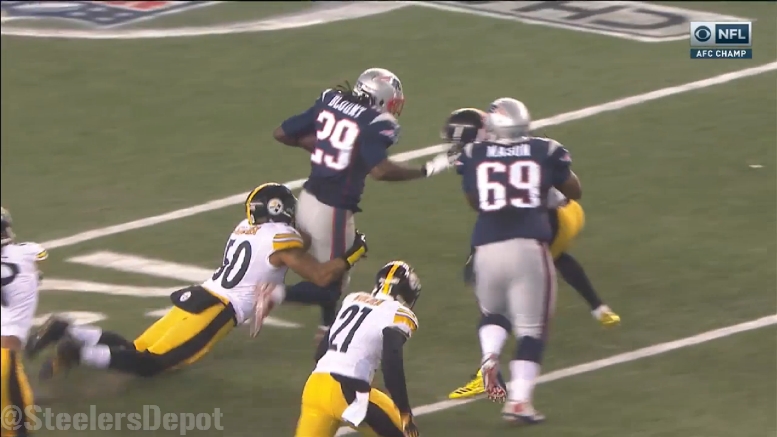 Up sixth in this series is a 2017 preview profile of inside linebacker Ryan Shazier.

Intro: After playing well in the Steelers first two 2016 regular season games, a knee injury suffered by Shazier during the team’s Week 3 game ultimately sidelined him for the next three contests. After the Week 8 bye, however, Shazier looked and played like his normal self on his way to averaging just over 7 total tackles during the final nine regular season games. That stretch included the former first-round draft pick registering 3.5 sacks, two interceptions, two forced fumbles and six total defensed passes. He went on to add two more interceptions during the Steelers playoff run.

Current Strengths: Shazier’s extreme athletic ability allows him to slice through small gaps both ahead and behind plays in order to shut down running plays or get after opposing quarterbacks. He’s a fairly reliable tackler on top of it all. In coverage, Shazier can drop into the middle of the field and possesses a keen awareness to quickly find which way the pass is going and hone in on the target. He can also cover quite a bit of ground sideline to sideline in a hurry in an effort to stretch out runs plays and fill gaps in the process. In the past, Shazier has shown the ability to take on blockers on the edge and beat them regularly.

Current Weaknesses: Outside of Shazier’s inability to stay healthy and on the field for long stretches, he also has had a few problems in the past at taking on much bigger second level offensive linemen on the inside. He’s better suited to play in space and when minimal second-level trash needs to be avoided. Nitpicking a bit more, Shazier also has the tendency to miss his run fits at times. Very occasionally, he’ll also stumble while trying to drop into coverage.

2017 Outlook: The way Shazier played for the Steelers after the bye last season was very impressive and it’s no wonder the team ultimately decided to pick up his fifth-year option earlier in the offseason. The main knock on Shazier his entire time in Pittsburgh has been his propensity to miss games due to injuries and if he can remain healthy in 2017, he figures to easily have a career year that includes more than 100 total tackles, a handful of interceptions and forced fumbles, along with three or four quarterback sacks. We’ve seen Shazier have some ultra-impressive games during his first three seasons in the league and there’s no reason to think he won’t have even more of them in 2017 with a few possibly deciding outcomes.