We’ll focus on a position that may become the Steelers’ greatest need come the draft – outside linebacker. And one of the top prospects at that position. Kentucky’s Alvin “Bud” Dupree.

– Built well, looks the part, lot of muscle with little fat
– Excellent first step, explosive get off
– Speed rush forces tackles to cheat their kickslide, allowing them to be beat inside
– Tremendous athlete, maybe the best at his position
– Flashes quick hands and a strong punch, staying disengaged from the OT
– Love his motor, hustle
– Gets long arms extended versus the run
– Capable of shedding vs the run
– As versatile as they come
– Played mostly as an OLB in a 3-4
– Experience playing both sides, rushing and dropping, played with his hand down at LDE
– Some special teams value
– Impact player with a high level of production against good competition
– Lots of starting experience

– Inconsistent pass rusher who doesn’t always exhibit good hand use
– Can get run up the arc, speed rush may be a little out of control
– Needs to add to repertoire as a pass rusher
– Needs to show more consistent flexibility and strength to turn the corner
– Has trouble anchoring against the run, can get pushed around when he’s stuck

Typically, after watching multiple games, I’ve gained enough confidence to make a claim over how I expect a player’s career to play out. An educated guess, of course, without much certainty. But nonetheless, a claim I’ll stick by.

For Dupree, it’s been a little more difficult. I’ll preface by saying I am still not completely sure how I feel about him. I’ve wavered back and forth. That seems to sum Dupree up well. Like my feelings, he’s inconsistent.

But we’ll start with the positives. One thing that is abundantly clear is the freak athlete he is. Looks good getting off the bus and is already at an NFL size. He’s cut with a lot of muscle and overall, carries his weight as well as you could hope. An intimidating-looking prospect.

And if his claims are true, he’s going to light up the Combine. If he jumps over 40 inches and runs in the high 4.4’s, something he’s claimed to be able to do, draftniks are going to lose their collective mind. It’s typically wise to not take a player’s claims at face value but with an athlete like Dupree, I believe him.

Those numbers that indicate explosion transfer to the tape. Borderline incredible get off that’s able to plain whip tackles. Explodes off the edge, gets to the QB, and doesn’t let him make a clean throw on the swing. He’s lined up at LOLB in this GIF.

While it’s part of what makes him inconsistent, when his hand fighting in the pass game is good, it’s good.

Like seeing the punch to slow the tackle and then beat him around the edge. Dupree is at LOLB, top of the screen.

I need to see more of this to his game, but he understands how to counter against tackles once they start to cheat and expect the edge rush. Another good punch followed with an inside counter that gets pressure.

Note he’s playing with his hand down as the LDE.

He would do similar on the next possession, winning inside against the right tackle. It’d result in a fumble and scoop and score for Kentucky.

Dupree doesn’t take that athleticism for granted, either. He plays hard on every snap. A trait that will endear himself to Steelers’ coaches and fans alike.

Despite rushing from his LOLB spot, Dupree runs to the catch and chips in on the tackle. What you love to see on any down, especially third and ten.

Perhaps the quality that makes Dupree the most intriguing is his versatility. The Wildcats played a 3-4 defense with Dupree serving mainly as an outside linebacker, who’d put his hand down in some sub-package work.

He has ample experience standing up at either linebacker spot. Has been asked to drop into coverage from either. There were games, the Florida one sticks out in particular, where he dropped more than he rushed. Well-versed in every phase of the defense. That’s rare to see in college and speaks to the athlete Dupree is.

The only difference I could tell was he mainly rushed with his hand down from left end. Not as much from the right side.

The Wildcats were comfortable enough at times to remain in their base defense even against 11 personnel. With Dupree’s athleticism, they’d line him over the slot. Shows the trust they have and the recognition of what kind of athlete they have. 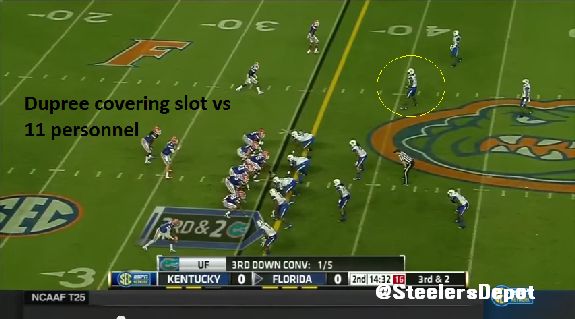 Despite seemingly having enough weight, his run defense leaves a bit to be desired. Must do a better job anchoring against the run when he can’t shed or has no choice but hold the point of attack in confined spaces.

Watch him get pancaked against Florida. He’s the ROLB.

There may actually be times where his first step is too good. Where his get off is so explosive that he gets out of control and isn’t able to turn the corner.

He smokes this South Carolina right tackle off the line. First step and explosion are top-notch. As good as you’ll probably find in this draft. Should be a win, right?

Despite the tackle beat and forced to lunge, he’s able to nudge Dupree enough to keep him from turning the edge. We’ll show it in GIF and picture form below. 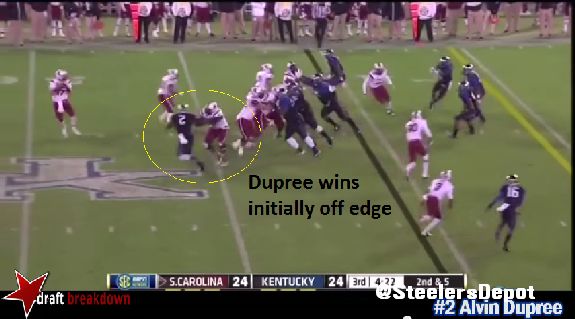 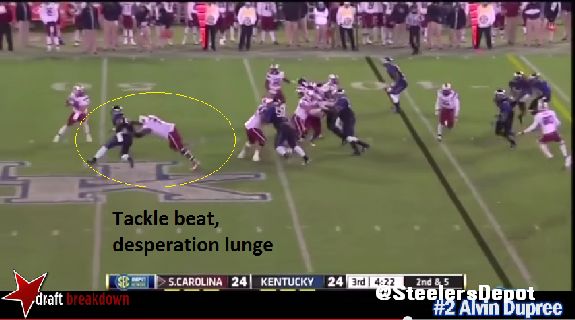 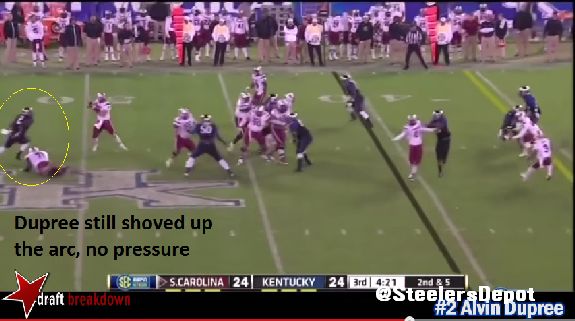 It’s a little out of control from Dupree. He’s going to need to get skinnier around the edge, really show that hip/ankle flexibility, or he’s going to have to power down just a bit. Sometimes, he’s fighting himself.

I don’t see him as a finished product. That’s exciting but also a little scary. It shows how much he can still grow – and we’re already talking at times, a dominant player – but how he’s still a projection and will need some coaching. He’s going to be inconsistent and will probably disappear at times early in his career. Has to get stronger and add a repertoire. Must continue to learn to use counters to his advantage. Use his speed rush to instill fear in the lineman and burn them for their aggressiveness.

The talk of an “Elephant” position has become more of a buzzword at this point. But if we are going to talk about it, Dupree is a natural fit.

I’m a person that loves to get into the X’s and O’s. To get into the finer details of the game. It gives me an excuse to stay indoors and avoid socialization.

But the “Elephant” position isn’t one that needs to be made complicated. Its qualifications are simple but precise.

Find a freak talent who can play all over the field and get after the quarterback. Don’t focus on what his limitations are. Focus on his strengths.

Dupree fits that description perfectly. He’s not perfect but it’s intoxicating to think about what he is capable of becoming. There are only a handful of players in each class who have a skillset similar to what he brings. You don’t pass up those guys.

When we’re focusing on arguably the most important position of the front seven, a dominant outside linebacker, you have to be willing to take that chance.

The only concern now is if someone before the Steelers will decide to pull the trigger first.

Games Watched: at Florida, vs South Carolina, at Missouri, at Louisville