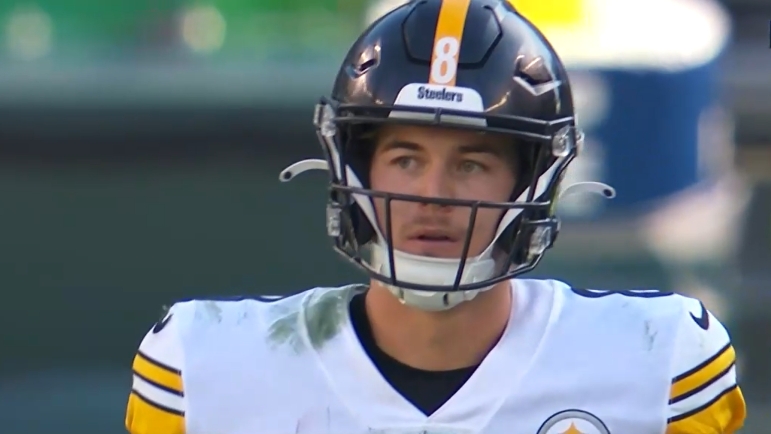 Will Kenny Pickett be the next Pittsburgh Steelers’ great quarterback? Or will the team still be searching for that player five years from now? It’s still far too early to make that determination on Pickett. I’ve been as cautious as anyone about coming to conclusions with his game. It’s fair to analyze, to critique, to discuss the good and bad – and there’s certainly been both – but making final statements is dangerous right now.

But there’s one thing I’m confident in. And it’s a good sign for Pickett’s success going forward. He’s one heck of a leader.

He hasn’t shied away from the opportunity. He’s met the moment. Every step of the way, Pickett’s presented himself as he was advertised. A mature, heady, competitive dude who wants to win and elevates the group around him.

It’s been evident since basically Day One of his Steelers’ career. Think back to rookie minicamp. Of course, everyone was rowing the same boat – veterans weren’t there yet – but Pickett took immediate charge of the huddle.

“I know how to operate— I know what it’s supposed to look like at a high level,” Pickett said after his first rookie minicamp practice. “I voiced an opinion to make sure to make sure we’re trying to get to the same page.”

Has that translated? Absolutely. Pickett made similar comments in early October, making it clear he’s in charge as the play comes in.

“I just like a clean huddle,” he said following his first NFL appearance versus the Jets. ”I want everyone to hear the call, I want everyone to be on their Ps and Qs of what they have to do. I don’t want to come back and hear guys say they didn’t hear it because they were talking and stuff like that”.

That’s the benefit of drafting a 24-year old who spent five years in college and played at a high level in 2021. It may be the NFL but high school, college, or pro, details are details. Pickett’s committed to them and making sure his teammates are too. That’s for the good of the entire offense.

It’s easy to lead when things are good. It’s like the old saying – when the seas are calm, anyone can be a good captain. Or put more succinctly by Mike Tyson, everyone has a plan until they’re punched in the mouth. Following the team’s ugly 35-13 loss to the Philadelphia Eagles, a game riddled with unforced errors by the Steelers’ offense, Pickett took to the podium postgame to call out the group.

“Not detailed, guys need to know what they’re doing”, he said following the loss. “We need to study more. I don’t think we study enough as a group. There’s way too many penalties and stuff like that, which we can control.”

Right or wrong, Mike Tomlin and Matt Canada seemed to push back on those comments the following week, it takes some guts to say that out loud. You know your teammates are going to hear about it, you know it’s going to be the story of the week. Pickett’s old enough and smart enough and heck, knows how the Pittsburgh media works living in the city for the last five years, that comments like those were going to get plenty of attention.

But he said things that needed to be said. Since then, things have been better. Pickett shouldn’t get all the credit for that, it sounds like the team had a serious bye week reset to change culture and course, but these things start at the top. Head coach, quarterback. Those two dictate the tone and pace of the room. And when things are bad, Pickett isn’t hiding from it. He’s running into the burning building, looking for a way to get everyone out.

In the weeks since, guys have gone to fight and bat for Pickett. Running back Benny Snell couldn’t say enough good things about him after the Colts’ game. Perhaps in part because Pickett believed in him enough to give him a chance. Facing third and goal and down by a point, it was Pickett who convinced coaches to run a zone read that had a high likelihood of Snell getting the ball. He got it and capitalized, untouched into the end zone, for his first touchdown in two years.

“I’m just willing to go all out for him,” Snell said earlier in the week.

Those are the things you want to hear.

This Steelers’ offense? They need a leader. One of the youngest offense’s in the league with no real veterans. Their two captains are a benched Mitch Trubisky and a second-year Najee Harris, battling through injury and poor play. Gone are the days of veteran pillars along the line in Maurkice Pouncey or Ramon Foster. The receiver room is young and green while the tight ends are full of good eggs – Pat Freiermuth, Zach Gentry, and Connor Heyward – but they’re not leaders.

In moments, Pickett’s still playing like a rookie. He’s making progress but has plenty of room to grow. A product worth watching over the final six games. But as a leader? He’s anything but like a rookie. He’s taken charge, stepped up, and has total command over this offense.

Being a good leader doesn’t punch your ticket to greatness. There are great leaders and bad quarterbacks. But with rare exception, any quarterback worth their weight is capable of leading. Or at the least, guys want to play hard for them, just in the way they did for Ben Roethlisberger. Pickett’s a leader. That much I know. And it’s a solid foundation to build upon whatever comes next.