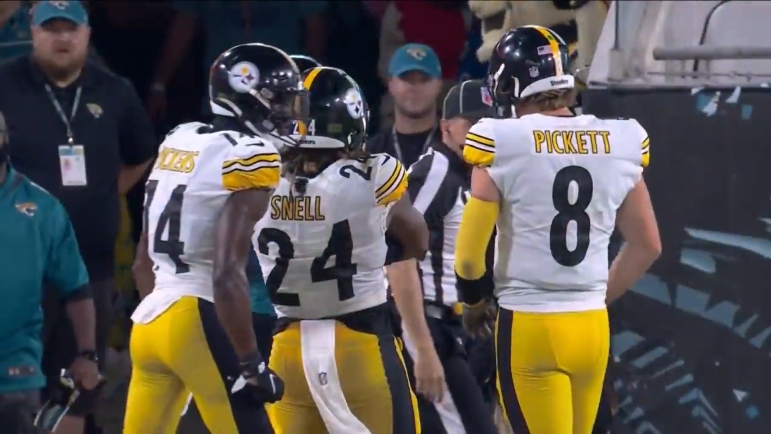 Though just a rookie, Kenny Pickett has already commanded the respect and admiration of veterans in the Pittsburgh Steelers’ locker room. Benny Snell went from third-string afterthought to center stage Monday night, leading the Steelers in rushing while notching the game-winning touchdown in part thanks to a playcall Pickett suggested to coaches. And speaking to reporters Thursday, Snell said he’d go to bad for Pickett every time.

“Anytime I’m in there with Kenny, I’m just willing to go all out for him,” he said via Steelers.com.

It’s a bond Pickett helped create back in the summer. While Mitch Trubisky worked with the starters and Mason Rudolph saw the majority of second-string snaps, Pickett and Snell received plenty of work together as third-teamers. For the first time since the pandemic, the Steelers were back in Latrobe, a setting that’s better for team-building than Pittsburgh where teammates got their separate ways after each practice.

Snell referenced those dog days of summer that created chemistry between the group.

“Training camp, it was really fun with him. Because he actually has a genuine energy that he brings after he makes a play or even when he is calling the play. I’ll maybe get a first down or something and Kenny’s hyping me up. I’m hyping the offensive line up and we’re all feeding off energy.”

Snell missed some time in the summer with a minor knee injury but his valuable special teams ability kept his role on the team’s 53-man roster. After working there for most of the year, he stepped in and stepped up to beat the Colts, filling in for the injured Jaylen Warren and Najee Harris. Down 17-16 in the fourth quarter, Snell carried the ball left side for a three-yard touchdown, his first score since December of 2020.

Snell reflected on that moment from his own perspective, wanting the ball after two failed pass attempts on 1st and 2nd and goal.

As we wrote about yesterday, it was patience paying off for Snell, who has worked hard and bided his time for a game and moment like that.

While the focus needs to start with Snell, Pickett has emerged as a serious leader and face of this offense in recent weeks. He goes to bat for his guys and they do the same to him. It’s finally creating much-needed traction in the offense, a trend that hopefully carries over into Sunday’s game against the Atlanta Falcons. Though Warren is expected to play, Najee Harris’ status seems questionable, so Snell may again have an offensive role.