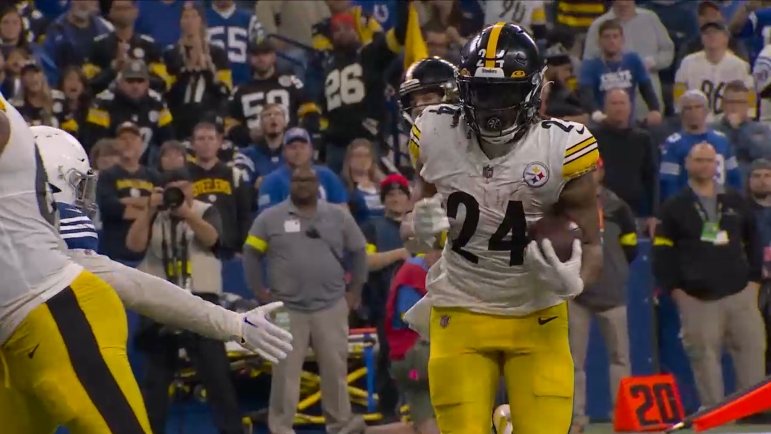 Nothing in the NFL is given. It’s all earned. That’s especially true for RB Benny Snell and why his success Monday night was extra sweet. To see any player go from offensive afterthought to spotlight is awesome, the payoff of blood, sweat, and tears. But for Snell to shine in Monday’s win against the Indianapolis Colts was something beyond that.

For the last two years, Snell served as a backup. Bumped out by Najee Harris’ arrival, he’s been virtually nothing but a special teamer since. To his credit, he’s taken that role in stride and done it well, a core and valuable player. For some, and I’m sure in moments for Snell, that adjustment is hard. In college at Kentucky, Snell was a star. Literally one of the best SEC running backs in history, third all-time in rushing touchdowns and 12th in yards. He was, as he’s said, Benny Snell Football. But once drafted, he went from being big man on campus to running downs kicks and punts.

Still, the first two years of his career, he was involved in the Steelers’ offense. Over 100 carries in 2019 and 2020, far from the league’s most efficient runner but a downhill runner who played with power. Once Harris was added, Snell became a clear backup, just 36 carries a year ago. As Jaylen Warren impressed this summer, Snell fell further out of offensive favor and prior to Monday’s game, had yet to carry the ball and logged just three offensive snaps.

With Warren out of Monday’s game, an opportunity emerged for Snell. When Harris was lost before halftime, Snell ran with the chance. He carried the ball 12 times for 62 yards and the go-ahead, game-winning touchdown. He closed the game out on a high note with five carries in the fourth quarter for 27 yards, a 5.4-yard average, and that score.

I like Snell because he knows who he is. He doesn’t pretend to be anything else. He’s big, he has power, and he plays like it. One-cut, square his shoulders, get downhill and finish, like this 16-yard run.

And look at this touchdown spike. That’s how much that moment meant to Snell. All the emotions shown in that moment. Excitement, relief, frustration, anger, all the time he’s spent, all the hours he’s waited, all meeting in the end zone for the first time in two years.

The Steelers weren’t wrong to look for upgrades for Snell. He wasn’t going to be a long-term, starting answer. But it was great to see him step in and step up when the team needed him. Even without Harris, Snell and Anthony McFarland kept the Steelers a balanced and efficient offense.

His career has been humbling. Star college back, the face of a program, to someone cutting his teeth in the NFL and scratching and clawing every week. Snell has embraced his role and path, not fought against it, and all the work he’s put in paid off Monday night. Once the group gets healthy again, he’ll move back into that reserve role. But you have to respect the guy and his work ethic and the Colts game felt like some good football justice for him.