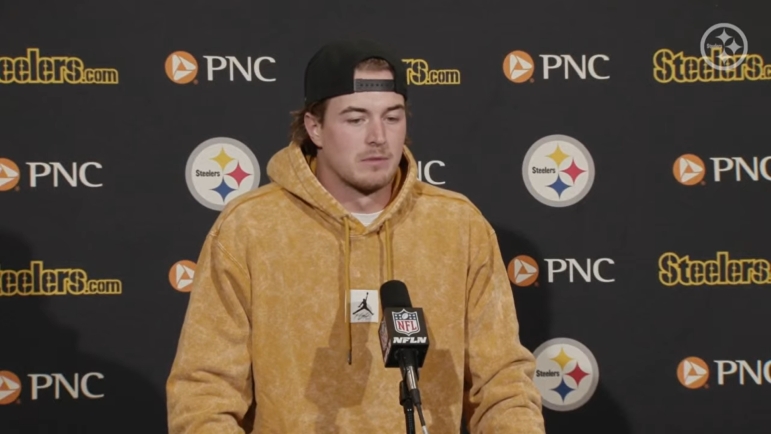 The Pittsburgh Steelers have undoubtedly shown themselves to be one of the most undisciplined teams if football. Measuring that by penalties and the types of penalties registered is just one way to do so, but it’s a telling barometer, and it’s not as though the players don’t notice this.

Rookie starting quarterback Kenny Pickett seemed to air a bit of frustration when he was asked in his post-game press conference what he believes is attributable to the team’s numerous penalties, particularly on the offensive line and the offensive side of the ball generally.

“Not detailed. Not detailed, guys need to know what they’re doing”, he said via the team’s official channels. “We need to study more. I don’t think we study enough as a group. There’s way too many penalties and stuff like that, which we can control. It’s all mental, so for that to happen, there’s really no excuse for that, so we have to figure that out and get it right”.

Even on special teams, a 38-yard kick return by Steven Sims was negated by a holding penalty by Tre Norwood. Then the kickoff team was flagged for an illegal formation penalty. George Pickens had his own catch negated by an offensive pass interference penalty. Then Okorafor was flagged for a hold.

Curiously, the Steelers did manage to avoid being flagged for the final 26 minutes of the game, the Okorafor hold being the last one called against them at the 11:30 mark in the third quarter. But the frequency and nature of penalties have been an ongoing theme throughout the year.

“Playbook. We gotta know what we’re doing”, Pickett added when asked to elaborate on his earlier comment about not studying enough. “Not getting in the right spot, not having some procedural penalties, personnel in and out of the huddle, all things that we can control. There’s no talent issues. Anyone in here can go do that as long as they know what they’re doing. So we’ve got to get right there. It starts with me. I’ve got to be more on my stuff getting these guys right. I take ownership of it”.

They now have 59 penalties on the season through eight games, 28 on the offensive side of the ball. They have six false starts, five ineligible man downfield infractions, three illegal formations, and three delay of game penalties.

These are the sorts of entirely preventable penalties that point to a lack of discipline, a lack of studying, as Pickett said. But the fact that he said it is concerning. You don’t say that your team isn’t studying enough, during a post-game press conference, unless you’re frustrated by what you’re seeing.

And I don’t need to tell you, but maybe we should be concerned. Why is your starting quarterback saying that he doesn’t think the team studies enough? The most logical reason is that you’re not studying enough. I’m sure this isn’t the last time we hear about that remark.