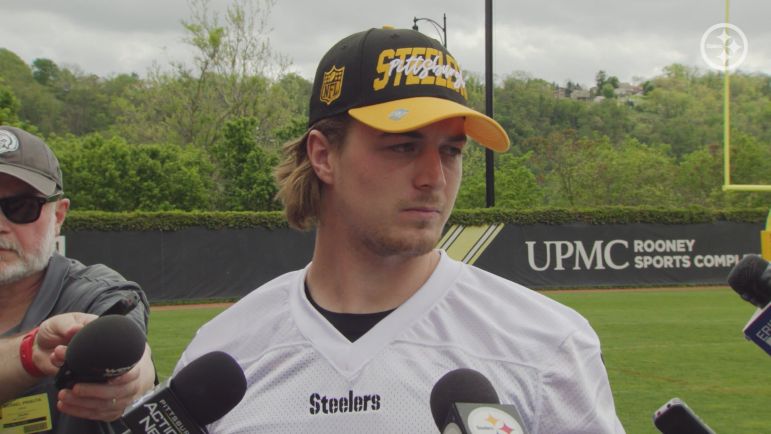 The Pittsburgh Steelers’ near future, and potentially foreseeable future, took its first steps on the UPMC Rooney Sports Complex practice field yesterday in the form of first-round quarterback Kenny Pickett, who is not unfamiliar with the area. Indeed, he practiced right next door, and played his home games at Heinz Field, for the Panthers (as if you weren’t aware).

Whether or not he establishes himself as the long-term franchise quarterback for the Steelers, one thing I don’t think we’ll have to worry about is him not knowing what he’s doing. He comes in poised and ready to embrace the role of a professional, and shows a willingness to lead right off the bat.

“I’m just being myself. I know how to operate—I know what it’s supposed to look like at a high level”, Pickett told reporters following yesterday’s opening of rookie minicamp when he was asked about his visible moments of leading others through drills and assignments.

“I voiced an opinion to make sure to make sure we’re trying to get to the same page”, he went on. “It’s day one, but there’s little things that can help guys out with communication and stuff like that. I think as the walkthrough went, you saw that it got cleaner, so I’m happy with how that went, and excited to compete now against the defense here”.

Of course, the coaching staff isn’t throwing the playbook at them. They’re taking in installation of the offense in stages. But it helps to have a player like Pickett who can help communicate the coach speak into player vernacular because of the level of detail he puts in on his own, and the experience he has already had—even with some familiarity in the offense thanks to his connections with Matt Canada and Mark Whipple.

Still, he isn’t about to get ahead of himself. He understands this is a journey, and he’s taking the first steps on that journey now. “Just learning what I have to do”, as he put it, and with one simple goal in mind. “I mean, I got no shot if I don’t know what I’m doing”.

Few quarterbacks, I think, enter a situation more ideally suited for them to succeed than does Pickett, who gets to stay in the same facility, play his home games in the same place, and even play an offense with which he has some degree of familiarity, under an offensive coordinator who recruited him in college.

What he does with all of that grounding remains to be seen, and that will ultimately be determined in stadiums. But I believe he will have every opportunity to succeed in Pittsburgh, if he has it in him to thrive at the level necessary to sustain his tenure as the face of the Steelers.