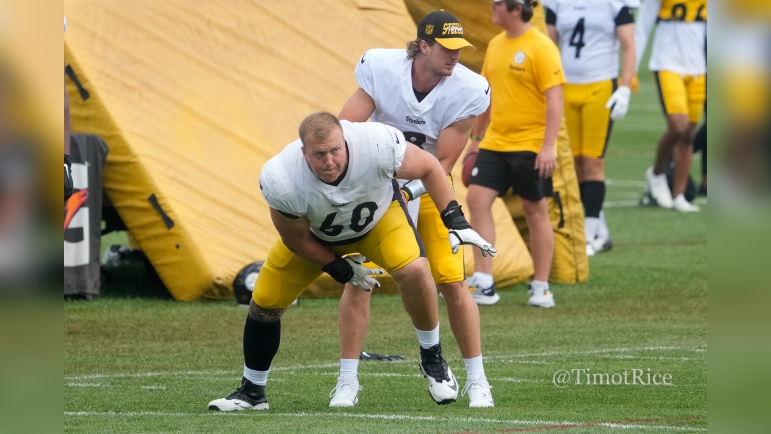 When the Pittsburgh Steelers starting center, Mason Cole, went down late in the first half against the Cincinnati Bengals, it was up to third-year center J.C. Haussenauer to fill the shoes of the often reliable Cole. It was Haussenauer’s first extensive snaps of the season, accumulating 41, after only five total offensive snaps in the Steelers’ first nine games in 2022. All in all, he held up well. He graded out as one of the five best offensive players, per Pro Football Focus, with a grade of 67.2.

With the status of Mason Cole up in the air, he was seen with a walking boot in the facility on Monday, it’s possible Haussenauer is the starter at center when the Steelers take the field at Lucas Oil Stadium in Indianapolis. As we haven’t seen him in extensive regular season action since week 17 of the 2021 season, let’s take a look at what he put on tape against the Bengals.

It wasn’t the greatest start for Haussenauer as he gave up a pressure on his first drive. He’s late seeing the Bengals end coming around on the T/E stunt, and by the time he does, he doesn’t bring his feet and dips his head. This allows Hubbard to slither through and get a hit on the quarterback, Kenny Pickett.

The very next play, he does a much better job at protecting his QB. His feet are much more active and he gives a good punch to the rushing defensive tackle. This creates a perfect lane for Pickett to step into the pocket and make an eventual throw that would result in an explosive play to Pat Freiermuth.

Haussenauer did clean up his work against stunts later in the game though. This time, the middle linebacker twists behind the defensive tackle. Haussenauer begins his set nicely against the tackle, and successfully passes him off to his right guard, James Daniels. Then, he cleanly finishes the rep by eating up the blitzing linebacker.

On this next rep, he does allow some penetration from the defensive tackle, but he simply rides him up the arc away from the quarterback and out of harm’s way.

Overall, other than the initial pressure on his first drive, Haussenauer was solid in pass pro. Any narratives that he was the reason Pickett was pressured more in the second half are false. Most of the pressure that crept in on him was from the tackles allowing pressure off the edge.

He’ll never be a road grader, but he wasn’t bad in the run game either.

We’ll first look at my favorite rep of the day from him. On the combo block, he fires off, getting enough of the defensive tackle to pass off to right guard James Daniels. He’s then able to successfully climb to the second level and clear the linebacker out of the way for Najee Harris to slip through for an extra 8 yards.

While Kevin Dotson may deserve more credit here than Haussenauer, they both do a great job of blowing the defensive tackle off the ball here. Haussenauer is able to finally finish him off of a pancake. Unfortunately, the slanting defensive end ruins the great push in the middle.

This is the last run-blocking rep we’ll look at. Haussenauer again gets some help with a little chip from Dotson, but it’s just enough for him to be able to swing around and seal off this hole for Najee Harris to squeeze through for five yards.

The only rep I was truly upset to watch was on this screen pass to tight end, Pat Freiermuth. If you haven’t already checked it out, make sure you read Alex Kozora’s breakdown of the Steelers’ continuing to be the worst screen team. This looks to be set up well, but Haussenauer completely ignores linebacker, Logan Wilson. Allowing the LB to roam free completely destroys this play. One may be able to assume that he thinks Left Tackle, Dan Moore, is going to get him so he starts to look inside, but Moore is blocking the outside corner. A frustrating error for a play that could have been a successful one.

The last thing I wanted to take a look at was Haussenauer’s illegal man downfield. It’s impossible to blame him for this as there’s plenty of confusion going on in this play. I’m not sure if Pickett checked at the line, but half the team is blocking for a draw play and the other half is running a pass play. Inevitably, Haussenauer is downfield when Pickett throws the pass, but it’s hard to put him at fault as he’s on the same page as the quarterback who clearly wanted to hand it off to the running back.

J.C. Haussenauer is what you want in a backup offensive lineman. He’s not a starter because he’s lacking the athletic makeup and will have a mental gaff every now and then, but overall he’s a solid player that you feel comfortable playing in a pinch. There’s a lot less worry when he’s trotting out there than there would be if Kendrick Green was forced to play again. While I hope Mason Cole is able to play Monday against the Colts, I don’t see it being a major blow to the Steelers’ chances of winning if Haussenauer gets the start.

What was your opinion of Haussenauer’s first extended playing time in 2022? Let me know in the comments!