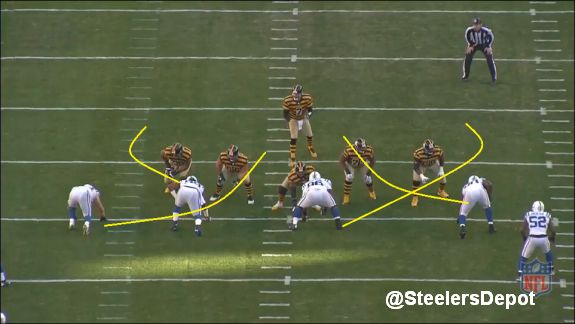 We’ll just look at the most basic stunt. It has two components.

The tackle: whose job is to crash the outside gap
The end: who loops inside a gap over

Let’s draw it up. 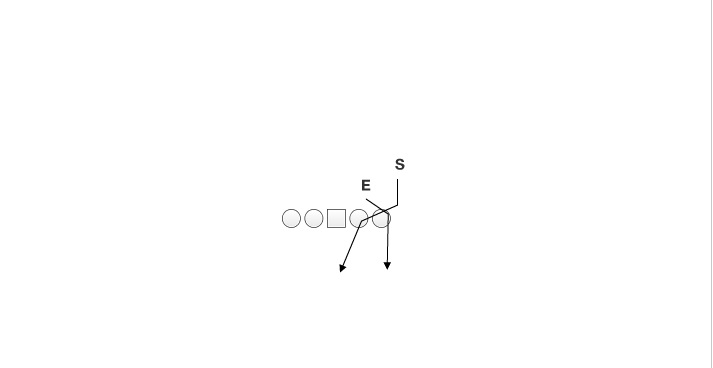 The end, the tackle here in this sub-package look, is going to crash into the right guard and carry into the C gap, becoming the new contain player. You always need to have contain players on rushes to keep the pocket constricting and not allow contain lanes.

The end is also going to influence the guard and draw his eyes with the fear of shooting the B gap. This will allow the looper the chance to come in free.

The looper is going to take initial steps to fake a typical edge rush, to force the tackle to set and avoid tipping off the stunt. He’ll then crash inside and cross the face of the guard, coming off his inside hip. If the guard reacts too late, the linebacker has a chance to be one-on-one with a back, or even better, completely free and with a path to the quarterback.

Here’s a real life, Steelers’ example. Week 2 against the San Francisco 49ers, a game where Pittsburgh terrorized Colin Kaepernick. Sub-package football, Jarvis Jones gets lined head up over the right guard with Arthur Moats as the LOLB.

Jones is going to crash and take the C gap while Moats loops inside off the guard. The guard bites on Jones’ rush, creating a huge lane for Moats up the middle. Add in pressure from Stephon Tuitt as the right contain rush, just whipping Joe Staley, and Kaepernick is toast.

Also important to have Cam Thomas engage the center to the opposite side of Moats’ stunt to eliminate another potential player to get in front of Moats.

It’s a simple way to create chaos, even with just a four man pressure. If just one man falls off the track along the offensive line, the whole thing falls apart.