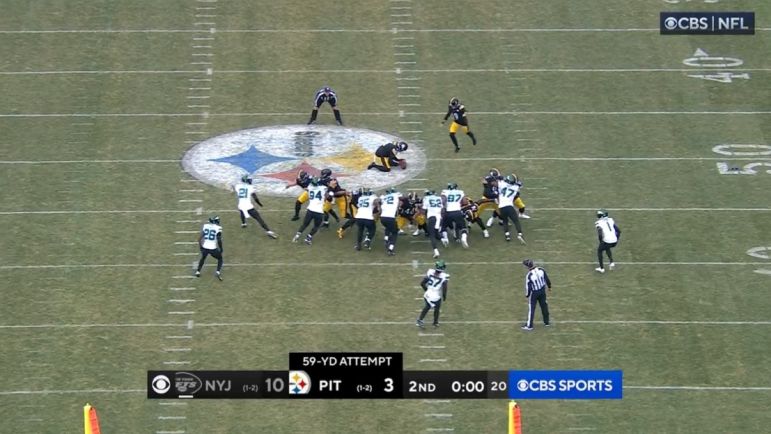 If there’s any good news to come out of the Pittsburgh Steelers third straight loss, kicker Chris Boswell set a Heinz Field/Acrisure Stadium record Sunday. His 59-yard field goal at the end of the first half is the longest kick ever made in Pittsburgh’s home stadium history, breaking the old record also set by Boswell of 56 yards.

To close out the second quarter, Boswell nailed a 59-yarder that would’ve been good from 65. Take a look.

Boswell provided all six of the team’s first-half points until they turned to Kenny Pickett for a spark, putting up two touchdowns in the second half.

The history of kicking in Pittsburgh is well-documented. Not a friendly place for kickers and for decades, hitting 50+ yards was a foolish decision. While kickers have naturally gotten better over time, no one boots them in Pittsburgh like Boswell. He’s become one of the league’s best from 50+ yards out, now 4/5 on the year from that distance.

Last season, he hit from 56 yards out against the Las Vegas Raiders, which at the time was the longest kick ever made at Heinz Field.

Boswell’s 59-yarder was the second from 50+ he made on the day, beginning the game with a conversion from 51 yards out. Since signing with the Steelers in 2015, he’s 21-of-26 from that distance, easily having the most number of makes from 50+ in Steelers’ history. No other kicker in Steelers’ history has more than eight.

This kick also tied his personal career long, equaling what he did in 2020 on the road against the Dallas Cowboys. For the 2022 season, Boswell is 8/10 with one of his misses coming from 53 yards away. At the rate he’s on and heck, he might already be there, he’ll go down as the best kicker in team history. He doesn’t quite have the longevity stats of say, a Gary Anderson, who spent 13 years in Pittsburgh, but Boswell will get there soon enough. With a new contract, he’s not going anywhere for a long time.

Now all that’s left for him to do is hit one from 60-yards out. It certainly feels like that’ll come sometime later this season.