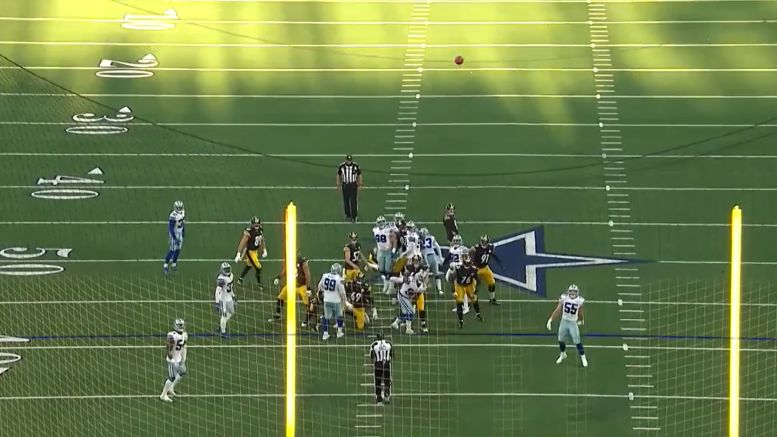 This may not exactly be the most significant storyline coming out of Sunday’s game against the Dallas Cowboys, but Pittsburgh Steelers kicker Chris Boswell made some franchise history today, breaking two records with a single kick in the closing seconds of the first half. And it only came thanks to Cameron Heyward starting early.

After Cameron Sutton stripped the ball from Cowboys wide receiver CeeDee Lamb and set the Steelers up at the Cowboys’ 39-yard line, Mason Rudolph had to check in with Ben Roethlisberger heading to the locker room. He was only able to advance the ball three yards on three passes.

That set up Boswell for a 54-yard field goal attempt, which would have been the longest made field goal of his career. He missed, but Heyward, with two seconds left, was flagged for a false start. Because it is a dead-ball foul, it means the play never happened, so the Cowboys could not decline it.

That then gave Boswell the opportunity to attempt a 59-yard field goal on 4th and 12, which he drilled. It was not only the longest field goal of his career by six yards, but the longest in franchise history, with Gary Anderson and Kris Brown each having previously hit a 55-yarder.

Boswell has now made nine field goals from 50-plus yards on 12 career attempts, a 75-percent career accuracy from that distance. Reed went 8-for-17 in that range during his career, making about 47.1 percent, while Anderson went 8-for-27, which is a conversion percentage of 29.6.

It is somewhat amusing that the game in which Boswell sets a franchise record—or two, rather—for field goal kicks in the same game in which he misses an extra point attempt, and then had another blocked. It was his second and third miss on an extra point on the year, having gone 24 for 25 in the first seven games, but he entered the contest 9 for 9 on field goal attempts, and this made him 10 for 10. He would finish 2 for 2 on field goals, so 11 for 11 on the season.

At the end of the game, however, head coach Mike Tomlin passed on the opportunity to give Boswell a field goal try that would have put the Steelers up by eight with less than a minute to play, going for it on 4th and 1. He noted that the Cowboys had been pounding the middle of their field goal unit all evening and felt the odds were better of converting on offense.

The week before this, by the way, Boswell quietly passed Franco Harris for fourth on the Steelers’ all-time scoring list, so now the top four spots all belong to kickers. He now trails only Gary Anderson, Jeff Reed, and Roy Gerela. Anderson has held the team record for more than three decades, since 1989 when he passed Gerela’s 731.