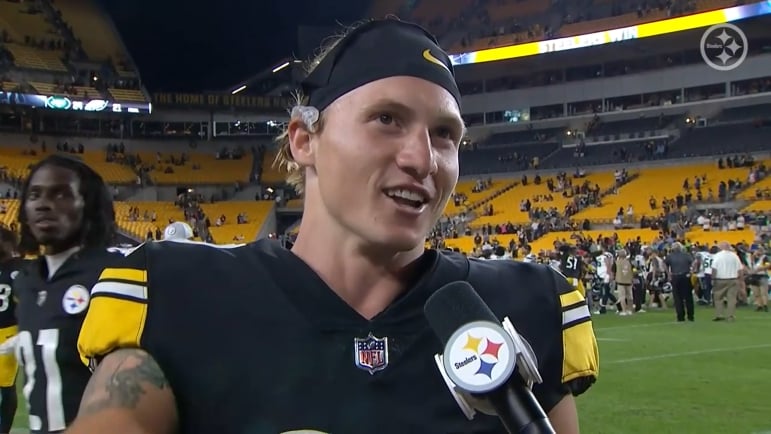 Gunner Olszewski has added a fair number of fans to the fan club since joining the Pittsburgh Steelers this offseason.

A former All-Pro punt returner of the New England Patriots back in 2020, Olszewski was signed by Pittsburgh to replace WR/KR/PR Ray-Ray McCloud who played as the team’s primary kick and punt returner the past two seasons after he signed with the San Francisco 49ers. Olszewski said shortly after signing with the team that he understood his path to the roster was through his impact on special teams, but also acknowledged that he is a wide receiver capable of making plays in the passing game as well.

Over the last couple of days, QBs Mitch Trubisky and Kenny Pickett have confirmed just as much, commending Gunner for his ability to get open and be a reliable presence thanks to his intelligence.

Kenny Pickett Praises Gunner Olszewski: ‘He Just Knows How To Get Open’

When asked about Olszewski on Wednesday after practice by members of the media, Mike Tomlin showed that he too was in the Gunner Olszewski fan club, commending his skills as a wide receiver.

“He’s adaptable, versatile, he plays multiple spots, he’s tough,” Tomlin said on Olszewski according to the official transcript provided by the team. “I can’t say enough about his toughness that he displays, whether it’s related to toting the ball or blocking or otherwise, he’s a game guy.”

Olszewski led the Steelers with 47 receiving yards this past Saturday against the Seattle Seahawks including the first TD of the game thrown by Mitch Trubisky. Throughout camp, Alex Kozora of Steelers Depot has reported that Olszewski has been making plays as a pass catcher, getting open in space and providing his QB with a reliable target for easy completions.

Mike Tomlin has taken an affinity for undersized, tough football players in the past, stating that he appreciates the 180lb football player in the league that makes it due to his will rather than his physical talent. He mentioned Corey Ivy as an example on The Pivot Podcast, but Olszewski fits that description as well coming in at 5’9 5/8”, 178lb during the pre-draft process. When you watch him play, you see a player with a reckless abandonment, going full speed despite lacking ideal size and speed.

Olszewski is the definition of a throwback football player which Tomlin can appreciate. He has scratched and clawed to make it into the league as a UDFA out of Bemidji State, currently looking like a lock for the Steelers 53-man roster. He epitomizes the grit and toughness the Pittsburgh Steelers want to be known for, and appears to be in position to contribute not only as a special teams ace in 2022, but also as a pass catcher on offense should his number be called upon.