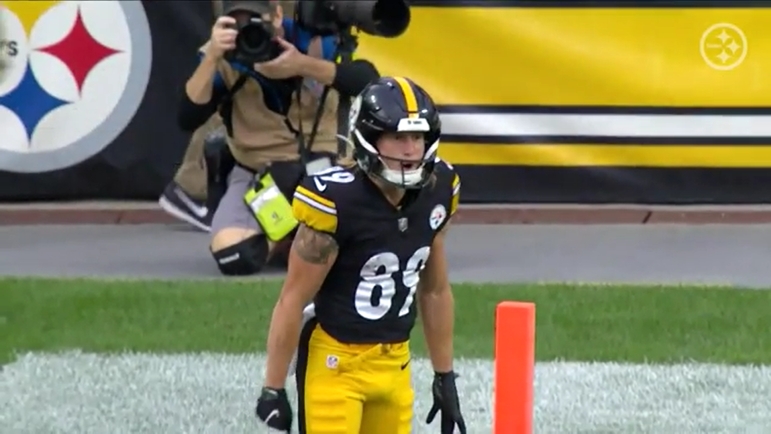 After the unfortunate injury to WR Anthony Miller that landed him on IR, it appears that WR/KR/PR Gunner Olszewski’s spot on the roster could be in better standing that it was when training camp started at Saint Vincent College.

If QB Kenny Pickett had his way, Olszewski would be a lock to make the team’s 53-man roster.

Pickett recently spoke to the media at training camp and was asked about the protection of his offensive line in Saturday’s preseason win against the Seattle Seahawks as well as wanting to have TE Connor Heyward in on the two-point conversion attempt. When asked about Gunner Olszewski and what he has seen from him so far in training camp and during Pittsburgh’s first preseason game, Pickett commended him for being an intuitive receiver he can rely on to make a play.

“Ya, he just makes plays in space and he’s just really smart,” Pickett said regarding Olszewski to the media on video via Steelers.com. “He knows coverage. He knows what the quarterback wants to see and how we’re seeing it from the pocket, and he just knows how to get open. He’s a football player. High IQ kind of guy. So, I really like playing with Gunner.”

Olszewski led the Steelers in receiving Saturday night against the Seahawks, catching three passes on four targets for 47 yards and a touchdown from QB Mitch Trubisky to put Pittsburgh on the board in the first quarter of action.

Gunner Olszewski profiles as that quintessential New England Patriots slot WR, coming in the mold of a Wes Welker, Danny Amendola, and Julian Edelman who uses his knowledge of coverage to find the soft spots in coverage to get open and present his QB with an open target. This trait has impressed Pickett thus far as well as Trubisky, who threw him the TD, and is a reason why Olszewski has been making plays throughout camp as a WR, even though he only had nine career receptions for 127 yards and a TD in regular season action as a member of the Patriots before signing a two-year deal with Pittsburgh this offseason.

Olszewski’s special teams’ prowess may have been the main reason for Pittsburgh signing him this offseason, but he stated shortly after signing with Pittsburgh that he is a wide receiver and will contribute however possible to help the team win football games. For a team coached by Mike Tomlin who goes by the mantra “we want volunteers, not hostages”, Olszewski has proven to be the latter and looks to be a viable pass-catcher should Pittsburgh ever need to call his number during the season.